Listen to: You Tube playlist, which includes Fugazi, Eric B + Rakim, Black Moon, Heatwave, the Kills

The Johnnies are back in the NCAA Tournament, and we've known this for weeks. The waiting, the anticipation for this game have been killing all fans.

And for the seniors, this is the culmination of four years of hard work, and a year of re-learning aspects of the game to get to a winning level. 12-6 - a reversal of last year's 6-12 conference record - is nothing to sneeze at. And while the season won't be a failure if the Red Storm lose to Gonzaga, it will leave a bitter taste that those seniors will never be able to get out of their mouths. Who wants to look back on 2011 and think, "I could have done more?" "I could have been better."

Here's to the Johnnies ending the season leaving it all out on the floor, with no regrets. And here's to Steve Lavin, once again working NCAA Tournament magic - he's 11-6 in the tourney, and he has prepared the Red Storm to travel west, to play in hostile environments, and to always be ready with his rotation choices all year. Here is where all the lessons become applicable.

Many St. John's folks flew to Denver to catch the game, where St. John's will deal with altitude, a tall Gonzaga team with some possible pro talent, and with the loss of D.J. Kennedy. We'll take some notes from the post on D.J. Kennedy's replacements, and from the Johnny Jungle preview that I wrote for this one.

Learn more, with Storm Warnings, Gonzaga's Strengths/ Weaknesses, and the Keys to the Game, all below the fold.

St. John's basketball has to replace the late-game free throw shooter. The heart of the defense. The jump shooter. The other scorer. The second defender. The defensive rebounder.

And while it would be better if there were more young players to take his place - Quincy Roberts, perhaps, or Omari Lawrence - there are replacements to be had. The team has enjoyed a resurgence from Sean Evans recently, whose strength and mobility are unique. Malik Boothe has played decently in conference play. Dwayne Polee II doesn't play many minutes, despite his ability. Below, a table of how each of 8 players in the rotation have played, along with Malik Stith, whose time has been limited but should see some minutes in the backcourt.

For the Red Storm, it's important to maintain the defensive pressure they maintained with D.J. Kennedy on the court; but it's also important to see how he's not replaceable by one player. He did almost everything well, though he didn't take a lot of shots; many of his shot attempts drew fouls, and were not counted toward his field goal attempt total. It's up to Justin Brownlee and Paris Horne to attack more; and Dwayne Polee has to get into positions to make the Gonzaga defenders off the dribble.

This could be difficult; the Zags don't extend their defense, and have been excellent in preventing shots inside in half court sets. Makes sense; they're awfully tall - 7th tallest team in the country when factoring playing time for their defenders. If St. John's can get Brownlee into space, I like his chances to draw some fouls.

As well, Dwight Hardy can't have a mediocre performance against the Zags. And a bigger lineup will be needed to keep Gonzaga off of the offensive glass, where they have been solid rebounders, grabbing 36.1% of their own misses with their center rotation, especially with 7-footer Robert Sacre and 6-11 Kelly Olynyk, though athletic Elias Harris snags some as well. 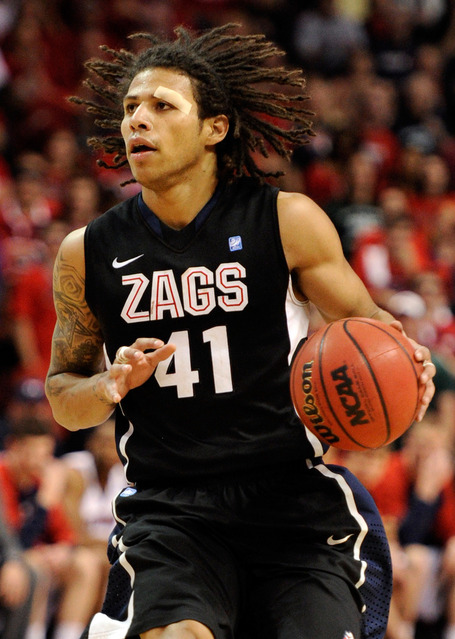 The internationally flavored Gonzaga Bulldogs should have some love from the Denver fans; they're not so far in Spokane, Washington, and already have a fanbase there. This will feel like a road game, against a talented Bulldogs squad. They are led by junior center Robert Sacre and senior guard Steven Gray.

Gray is a very good open shooter, and is the main threat from outside. He handles the ball at times, can make passes and has some height... but he also has had some turnovers.

This is an issue for the Bulldogs; Demitri Goodson plays the point guard and is athletic, but limited in where he can shoot and isn't the surest ballhandler. The Zags have given a lot more time to freshman David Stockton, who is a very good passer, but slight in size. Paris Horne will have some challenges on the perimeter.

At the wing, 6'8" Elias Harris is a talent who disappears at times. But he can rebound, score in isolation, score off the dribble. Along with him is the efficient guard Marquise Carter, a lanky junior guard who is the Zags' best steals man and a solid perimeter defender. He can slash to the basket and score off of the jump shot.

Zags Positive: Deep height. Sacre, mentioned above, is a very good rebounder. But he is also an extremely skilled post player and a good shot blocker. He's a little raw, and his feet on defense don't look excellent, but not so bad that he won't be a factor against St. John's. There is more depth in the freshman scorer Sam Dower (who scores with his left hand only) and Kelly Olynyk (no relation to Larisa Olenyk... we don't think) who is a little gawky but skilled at scoring/ shooting. Fouling out one guy won't mess up the Zags rotation; they have bigs like a hydra.

Zags Positive: Interior scoring/ skills. Sacre is skilled. Dower is skilled. Olynyk is skilled. Elias Harris at the wing is 6'8" and athletic and skilled. He can also rebound, score in isolation, and score off the dribble. There's a lot of interior scoring on the Zags, and they hit 52.1% of their two-pointers. Can St. John's active zone defense slow them down in the halfcourt? Can St. John's keep the game a transition matchup?

Zags Negative: Perimeter defense. The Zags allow opponents to hit 36.1% of their perimeter shots. Their defensive strength is inside. St. John's isn't a great perimeter shooting team, but looking at their numbers from January or February shows a team that has gotten a little better over time - especially star Dwight Hardy.

Zags Negative: Steady guard play? The Zags turned to David Stockton out of a certain desperation; Demitri Goodson struggled, and no other player was good enough to take over. Stockton is a good passer, but hasn't played non-conference opponents yet. Can he handle the pressure defense of the Johnnies? The Zags' turnover numbers seem to indicate that they can struggle, something to watch.

Under pressure. The Johnnies have to apply pressure on the Bulldogs; if the game becomes a halfcourt match, the Red Storm have a lot less chance to pull off the win. Malik Stith and Malik Boothe could be critical.

Hardy on fire. Dwight Hardy needs an efficient scoring game. Lots of points, lots of free throws, and some timely treys. He has to carry this team, and he can do that; look for Brownlee and Hardy working with some pick and roll and other isolation-style plays.

Defend Sacre and Harris. St. John's depth at the forward could be challenged if Burrell and Sean Evans get a lot of time; both can be foul prone, and the Gonzaga bigs are talented and big. Harris, in particular, is a matchup problem that Kennedy could have handled. Can the Red Storm disrupt the Zags interior scoring with the matchup zone? Can they keep the ball out of Sacre's hands and make someone else score? Can they do this without leaving Steven Gray open?

Rocky Mountain Brownlee. Justin Brownlee needs to score. He needs to be active, and he can drive on the Gonzaga defenders for pull-up shots and drives.

The x-factor. Someone has to step up on the team. Will it be the burly Sean Evans? Will it be Paris getting out in transition again for dunks and spotting up for deep jumpers? With Dwayne Polee II be unleashed? Will Malik Boothe carve the Zags up like a Washington apple?