A viscous, clunky, foul-filled game between local rivals ended with coach Steve Lavin being ejected for arguing an overruled call, and with forward Justin Burrell ejected for a hard foul.

It was the frustrating end to a frustrating night as #15 St. John's got worked over by the Seton Hall Pirates, 84-70 in Newark tonight. But St. John's getting "overrated" chants? That hasn't happened in a long time.

A silver lining to every cloud.

The Johnnies came out with a torrid defensive effort in the first half, ending 4 Seton Hall possessions with turnovers. But as announcer Chris Mullin said, the Red Storm missed an opportunity to get real separation between themselves and the Pirates in the game. He was right, as the Pirates shot better than they have all season, and maybe as well as they were expected to shoot when prognosticators picked Seton Hall (12-17, 6-11 Big East) to contend for an NCAA berth.

They're still not going to the postseason. St. John's, who will be going into postseason play, missed out on a chance to play for the Big East double-bye. Now, the Red Storm (19-10, 11-6 Big East) could STILL secure two games off and a slot in the top-4 of the league... if Syracuse loses to lowly DePaul.

In Syracuse. On their senior night.

That's probably not going to happen. More on the game, below the fold. 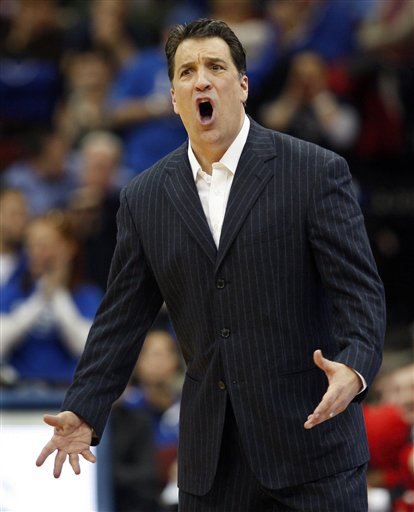 In truth, St. John's has delivered hard fouls to players in the waning minutes of the game under Norm Roberts as well, a sign that the team still has "fight" left in it. Throwing a punch at the end of a beating isn't "fight" to me, and I have always disliked that idea. Steve Lavin spoke about the behavior at the end of the game, and the Rumble will discuss it more tomorrow.

As for tonight's game - St. John's defense was often late in identifying their guy in the matchup zone. The Pirates were sharp at reversing the ball, and open shots fell.

Jeremy Hazell had a season-high 31 points and got to the free throw line 13 times... which is 30% of his previous total all conference season. Freshman Fuquan Edwin had his second best scoring total in conference with 17 points with 5 made threes - his highest number of makes in his fledgling career. Jordan Theodore added 16, Jeff Robinson had 10.

Did St. John's have tired legs from such a physical game? There were 26 personal fouls committed by Seton hall, and 20 by St. John's. Or were they tired from chasing the Seton Hall offensive players all over the court? The game lasted as long as an American League baseball game.

All the turnovers in the world don't help if the other team ends possessions with a made three. And it really doesn't help if that team gets to the foul line 32 times - about as much as St. John's did, and given the turnovers, at a higher rate per shot. Seton Hall hadn't been good at getting to the line in Big East play... but something about the Red in the St. John's unis, and the Red Storm fans in the stands inspired the Pirates to what is probably their best offensive performance of the season.

The Red Storm couldn't get much going, and they see how thin the line is between this year and last year. The Johnnies didn't defend well enough to get out and run off of missed shots. Their stars couldn't score efficiently. And the offensive plan that led to runners in the middle of the lane, apparently, isn't such an effective plan after all.

Dwight Hardy led the Red Storm with 23 points on 21 shots, but went 1 of 5 from beyond the arc. Justin Brownlee had a lost game with 12 points on 2 of 10 shooting, 7 rebounds (1 offensive). D.J. Kennedy did damage at the line, scoring 11 points on 4 shots and 9 free throw attempts; he had 5 steals.

Maybe it's time for the staff to switch up the sneakers and tie look, now that they've lost a game. Where do the Red Storm go from here? Prepare for Saturday evening's matchup against South Florida, prepare to send the seniors out with a win, prepare to get the team back on track.