The season is over for St. John's basketball. The season recap on this site is still to come. 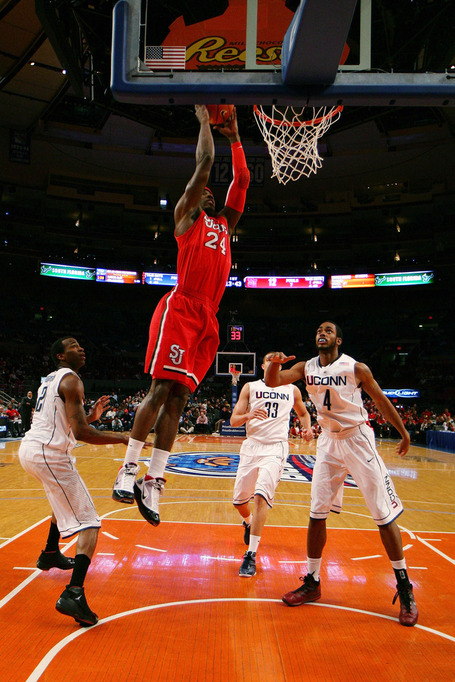 But a pair St. John's players will get a little shine this weekend in Houston, at the pre-Final Four festivities hosted by the National Association of Basketball Coaches (NABC). The Red Storm's Dwight Hardy will participate in the three-point shooting contest and in the NABC All-Star game on Friday afternoon, while Big East Sixth man of the year Justin Burrell (pictured at right; photo courtesy of Getty Images, Chris Trotman) shows off his athleticism in the dunk contest.

Congratulations to both players for their inclusion.

It's a great honor to have the school's name - and surprising, highlight-reel year - get a little more love on the national networks. The program has done a great job recently of getting the name back out there.

But now, it's time to remind the nation that these dudes are talented. Time to dominate! Or at the very least - time to have some good fun and hang with other senior ballers at the pre-Final Four festivities.

Read on for notes on the dunk/ 3-point contest... below the fold.

The Hoops Report: Slam Dunk, 3-Point, All-Star, Portsmouth Invitees
The Hoops Report is continually updating a page on participants in the NABC contests and Portsmouth Invitational invites - where college players who are borderline first-round picks or worse go to show what they can do for pro scouts, domestic and abroad. We'll borrow the lineups for the Dunk and 3-Point contests from the Hoops Report link:

Justin can be an awesome dunker - crazy hops, crazy raw power. But he's going to have a hard time winning against the UNC-Asheville entry. Searching for Billy Edelin remarks, "the innocent people behind these selections have no idea what they unleashed by putting this particular name in the field. Because, believe it or not, Williams' presence renders the rest of these so-called "dunkers" obsolete. It's like sticking Duke in the NIT and then hoping for a fair fight."

John "the Masked Dunker" is creative and ill.

That's a tough one to beat. And THEN there's the Division III guy, 5'11 Jacob Tucker:

Added to the truth that big men have to really impress (and be crisp) with their dunks, Justin's going to have to let his personality out. And St. John's fans know - he's got a lot of personality.

If it was a game, I would hand the award to Mickey McConnell, whose range is unbelievable. One of the few players who is "Jimmer-like" in where he will take and make shots. McConnell can't shoot like Jimmer can when contested, but when open everywhere looks like a layup.

Meanwhile Goudelock is a volume shooter. I've barely seen Ravern Johnson play, but he's tall, and as such may not jump as much to get his shot off. In a timed contest, a tall player with no big leap (so less risk of tired legs) can have a benefit.

Hardy? This will be interesting to see, and maybe a little bit of extra film for those who might think about bringing him into an NBA camp (or foreign camp) this summer. Hardy often shot and scored off the dribble, and teams couldn't see his pure shooting ability. Plus, if he whips out the "goggles" hand signal at the end of each round, I'll be happy.

Maybe a Do It For DJ t-shirt?

It's all in fun, and it'll be great to see two standout Johnnies in a semi-competitive college environment for the last time. Good luck in Houston, fellas.