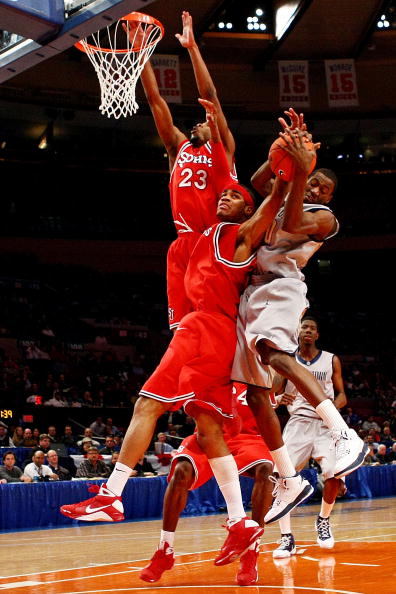 From day one, when we came in as freshman… There’s been a lot of sweat, blood and tears into this building and into the floor of Carnesecca and Taffner. It’s a special night for us. - Paris Horne, pregame

The last game of the regular season will be an all-black affair. A funeral? No; the seniors on senior night want to put the black jerseys on for one more night and win in them.  The black jerseys haven't been part of a winning game since they were introduced; I believe the team is 0-5 in them.

Of course, the team that wore the black jersey in the past wasn't as confident and well-run as this version of the St. John's Red Storm.

St. John's should have a more comfortable go of it tonight. They're favored by 13 points, as opposed to being favored by 2.5 against Seton Hall.

It's the end of a tough year for the Bulls. The loss of Dominique Jones wasn't exactly expected, but Stan Heath had some good shooters in the pipeline who had mostly sat while Jones did his thing.  And with a trio of junior college recruits, it seemed like maybe the Bulls wouldn't drop off so far.

Of course, Dominique Jones was an extremely high-usage guard whose physicality, basketball intelligence, and sheer determination wouldn't easily be matched; even though he wasn't a great shooter, he could create points. And it wasn't just him; heady point guard Chris Howard also graduated. Mike Mercer left too, but... well, given his spotty college career, no one's crying about the loss of Mercer.

And the players who came in just haven't had "it", whatever "it" is. Kansas State transfer Ron Anderson and JuCo transfer Hugh Robertson are probably the best of the newcomers. And any hopes that Augustus Gilchrist (Gus) can finally put his considerable talents together to make an efficient basketball-playing machine go with every ill-conceived deep jump shot... and the time he quit the team for a few days, earlier this season.

The one thing the Bulls have is size, and that size could pose trouble for the Red Storm. Jarrid Famous is tall, though at times awkward; Ron Anderson can rebound like a beast. Gus Gilchrist can make great post plays when he's motivated. And Toarlyn Fitzpatrick can play inside and outside (somewhat); the Bulls can play a very large lineup.

Bulls Strength: Forwards that earn free throw attempts. Ron Anderson, Jarrid Famous, and Gus Gilchrist get a number of free throw attempts from their work on the block. Justin Burrell will have to watch his defensive enthusiasm, and Justin Brownlee will have to play strong in the post, keeping South Florida's post men out of position early.

Bulls Weakness: Turnovers. The Bulls are the worst in the league in turnovers made... and in turnovers forced. They play back on defense so opponents have to contend with their height - not a bad idea - but their guards are ridiculously bad at handling the ball. So are their forwards. Only Shaun Noriega, who has taken 109 of his 129 attempts from beyond the three-point line, has a turnover rate of less than 15%.

Bulls Weakness: Outside shooting. Noriega and Robertson could get hot if left open, and Jawanza Poland and Gilchrist will take outside shots, but as a team, they have been woeful shooting from the outside, hitting 30.2% of their shots. Then again, Seton Hall only hit 24% of their outside shots in conference play before St. John's... that number is at 27% after Thursday night's defensive debacle. Paris Horne and crew will have to get out on shooters MUCH faster.

Know the offensive tendencies. No repeats of Thursday night; this team looks to go inside first, and the Bulls aren't adept passers, but still the outside shot has to be defended. Sean Evans and Dele Coker look to get some time on senior night. Those defenders have to body up the Bulls on the low block early.

Force turnovers. South Florida's forwards aren't great with the ball. Active hands on all passes, and pressure on the perimeter.

A crisp game. St. John’s has to handle pressure defense better, and know where the defenders are. And they can't get too hyped up; it's senior night, but they still need to grind out a win, and this is not a team that can win with less than near-maximum effort.

Slash and attack. Dwight Hardy and D.J. Kennedy need to attack the paint and the Bulls perimeter defenders, drawing fouls and freeing up Horne and others for open shots.

And congratulations to the graduating seniors. They have earned a good night.