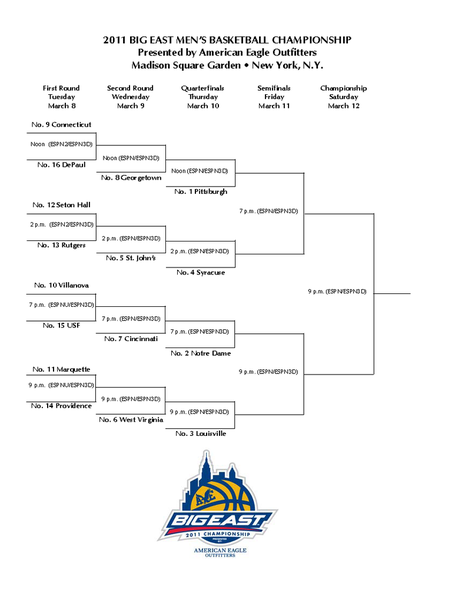 In a year where eleven teams are going to make the field of 68, this year is shaping up to be one of the best Big East Tournaments in recent memory. All sixteen teams will make their way to Madison Square Garden to compete for the title, beginning on Tuesday.

Even though there are no teams "on the bubble" this year in the conference, there are many storylines and star players to keep an eye on.

The Favorite: The Pittsburgh Panthers (27-4, 15-3 in Big East play) come in as the obvious favorite to this tournament. They held off the Notre Dame Fighting Irish for the regular season title, and have owned the Garden in recent memory. Over the last ten years, the Panthers have made the final six times, but have only won the title twice. For them to win this year, they will have to get great play from their guards, Ashton Gibbs and Brad Wanamaker.

Gibbs is averaging sixteen points per game despite missing games during the season with a sprained MCL. Wanamaker is averaging twelve points and five assists per game. This is a team that can beat you with their aggressive rebounding and great distribution of the basketball (first in the conference in both categories). The questions for Pittsburgh are a) can they find that third scorer if Gibbs or Wanamaker have an off night and b) will they shake off two late season losses on the road to the St. John’s Red Storm and the Louisville Cardinals. 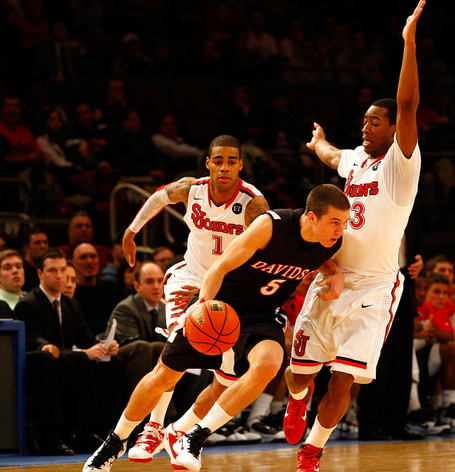 Sleeper Team: St. John's Red Storm (getty images photo/ chris chambers) - Yes, the Johnnies are my sleeper team because of their great success at MSG this year. They went 7-1 at the Garden, including wins over Notre Dame and Pittsburgh.

Despite the loss to Seton Hall on Thursday, this team put itself in a good position to go on a great run, led by my Big East player of the year Dwight Hardy. One of nine seniors on the Red Storm, Hardy averages eighteen points per game, including three 30 point games in the month of February.

To win this tournament, the Johnnies will need to knock down their shots. They are sixth in the league in field goal percentage (45.5%). They will see a lot of zone in the coming days as they could face the pesky zone of the Syracuse Orange in the quarterfinals. Plus, how will these seniors handle success coming off of the school's first 20 win season since 2002?

Player to Watch: G Casey Mitchell, West Virginia - With all the great players in the conference, I am going to go with Mitchell as the player to keep an eye on. The senior guard missed three games due to a suspension early in conference play. But Mitchell averages fourteen points per game, is an 86 percent foul shooter, and shoots 38 percent from beyond the arc. Just look at his game Saturday against Louisville where he hit two big 3's in the final minute to lead the comeback against the Cardinals; he can be an impact player.

The Mountaineers have a bye and will face Providence/Marquette on Wednesday with the potential of a third matchup with guess who? Louisville. There's a chance that the defending Big East tourney champions will repeat, but they will need Mitchell's hot hand to get them there.

See how the tournament will shake out, after the jump...

Round by Round Predictions 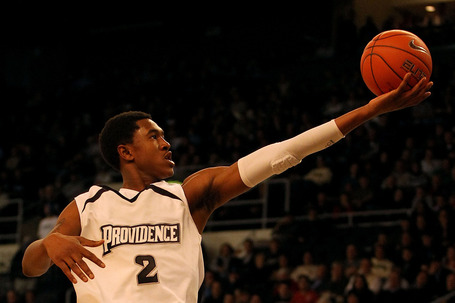 No upsets in Round One. Rutgers did beat Seton Hall earlier in the year up in the Prudential Center, but I don't think they have an answer for a healthy Jeremy Hazell. In his last seven games, the senior guard is averaging 22 points per game, including scoring 31 in a win over St. John's. He has unlimited range and will definitely shoot better than in January where the Scarlet Knights held him to 2-11 from beyond the three point line.

Best shot at an upset: Providence over Marquette - Marshon Brooks has done it all this year for the Friars and the Golden Eagles are coming off tough losses to Cincinnati and Seton Hall to end the year.

We know Brooks can go for 50 in a game, are we in for an encore? 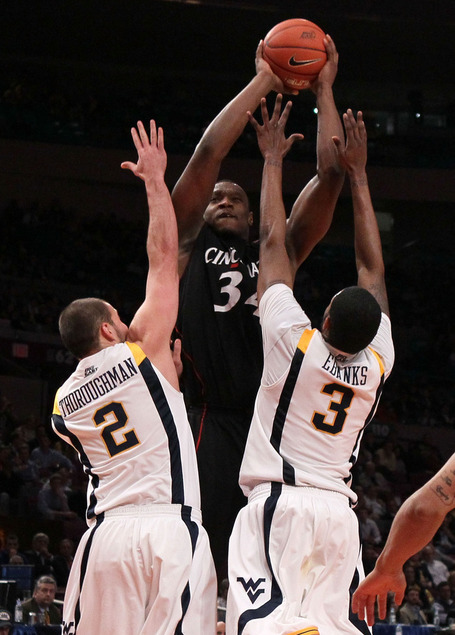 Couple surprises in this round.

St. John's will have revenge on their minds against Seton Hall after losing 84-70 on Thursday and the way the game ended - with the Pirates going for a dunk at the end of the game. Seton Hall also is one of the worst teams at shooting the three. They made twelve against the Johnnies, who shot just 40% from the floor; the teams will be more even in the rematch. Look for Dwight Hardy to win the game late.

Connecticut and Villanova both come into the Garden reeling, but the Huskies get the benefit of facing a Georgetown team without point guard Chris Wright. Kemba Walker scored 31 for UCONN in a 78-70 win for the Hoyas on February 16th.

Cincinnati has stepped up their play as well of late, winning five of their last six and will avenge an early season loss to the Wildcats in Round Two. Ever since coach Mick Cronin inserted Yancy Gates back into the lineup, the junior forward is averaging fifteen points and eight rebounds per game. Villanova has struggled to score from the perimeter, culminating with just 50 points in a loss to Pittsburgh on Saturday.

Last year, three of the four teams who got the double bye ended up losing the first game. This year, I have two losing.

One is the Syracuse Orange. They are coming into their home away from home red hot, but the Orange are not invincible. They do have one of the best rebounders in senior forward Rick Jackson and one of the best passers in Scoop Jardine...

But they are playing a different Red Storm team than the one they beat 76-59 back on January 12th. That day, St. John's shot 16% from three point range. If the Red Storm can attack the zone with Justin Brownlee and D.J. Kennedy, they can find some openings for Hardy and Paris Horne, who have improved their three point percentages down the stretch  to 38 and 36% respectively. Perfect way to take back the Garden!

The other double-bye loser is Louisville. The Cardinals have struggled away from the YUM Center with just a 4-6 record on the road. They are eighth in the league in rebounding, which allowed the Mountaineers to attack the glass in their two meetings for 88 total rebounds. Forwards Kevin Jones and John Flowers are nightmares for the Cardinals inside and that sharpshooter Casey Mitchell can make a huge difference. If Rick Pitino's team doesn't bring his hot hand in this one, Bob Huggins goes back to the semifinals. 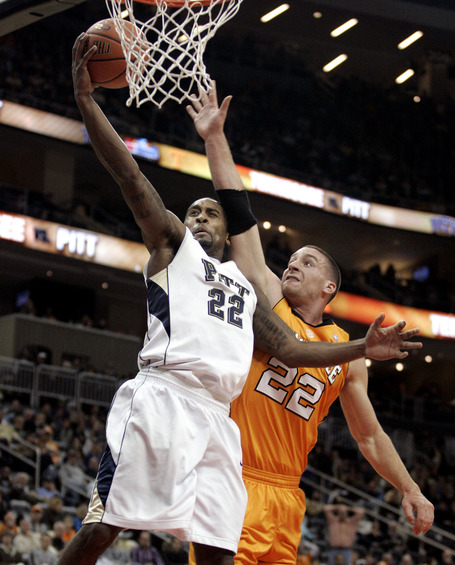 This is where the Garden favorite falls to the team that has won here year in and year out. In the first meeting, the one problem for Pittsburgh was they lacked scoring help for Ashton Gibbs. Senior leader Brad Wanamaker had just six points for the Panthers and shot 2-7 from the floor. If he gets his share of points, this is a tough team to stop. Also, the Panthers are tough to beat inside when Gary McGhee stays out of foul trouble. Close game, but Pittsburgh wins.

As for the second semifinal, I like the Irish. Their only loss in the last twelve games came at West Virginia (72-58 on February 19th), but I like something the Irish did on Saturday. After their leader Ben Hansbrough fouled out with 8:24 left in the game and Kemba Walker went on a hot streak, the Irish still found a way to win.

That win is going to help them in close situations like they will face in the Big East Tournament. When Hansbrough and Tim Abromaitis are on from beyond the arc, they are tough to beat - especially for a Mountaineers team that is 11th in the league in points per game. 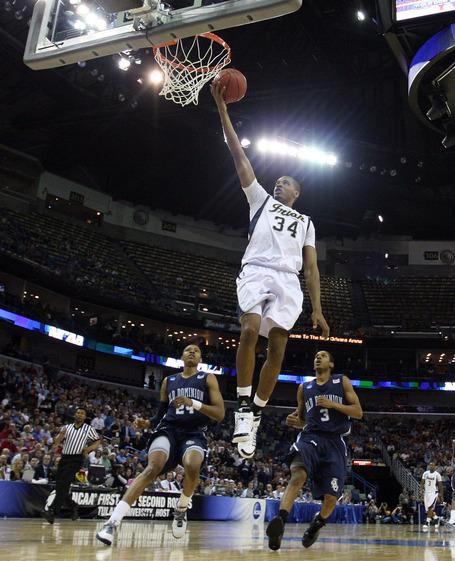 For some reason, Jamie Dixon can't seem to beat the Irish. Last year, Notre Dame stunned Pitt in the quarterfinals at the Garden and now this year, Notre Dame went into the Oakland Zoo and somehow squeaked out a 56-51 win back on January 24th.

Ben Hansbrough had nineteen points in the victory and in his last four games, he has scored no less than 21 in a game. The burn defense frustrated the Panthers to shoot just 40% from the field.

Keep an eye on forward Carleton Scott (pictured). Scott had nine rebounds against Pitt. He is very physical and is a threat for a double-double night in and night out. He will play a huge role in the Irish taking home the title and a #1 seed in the NCAA Tournament.