NCAA Tournament: a look back at the tournament's many surprises

Share All sharing options for: NCAA Tournament: a look back at the tournament's many surprises 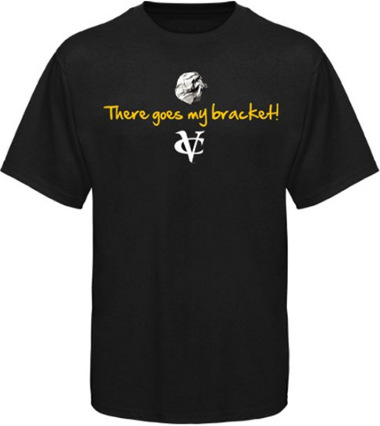 The road to the Final Four is over. The teams are in Houston, prepping for their semifinal games tomorrow – the Butler Bulldogs vs. Virginia Commonwealth Rams and the Kentucky Wildcats against the Connecticut Huskies.

This year’s NCAA Tournament was anti-chalk – chalk being the term used to describe a tournament that goes according to seed. The one seeds are all at home, stewing about the things that went wrong in their games; some of those players will be on hand to watch and play in the NABC all-star game tomorrow (as discussed yesterday, Red Storm guard Dwight Hardy will be at the NABC all-star game as well).

But many more will wonder - how did we lose to a double-digit seed? How come we came to play in the first game, and got crushed in the next? How could we end our season on the bench, head in hands, just watching the clock run out?

So many surprises, so many bitter defeats, so many close games. So many brackets, busted. No one could have predicted this tournament. Except for those two people.

Pico Dulce and Ricky Keeler look at some of the surprises from this year’s NCAA Tournament – feel free to add yours in the comments! Read on what we thought was surprising in the NCAA Tournament - below the fold.

So many competitive double-digit seeds: Clemson, Princeton, Marquette, Richmond, Morehead State, Florida State, Gonzaga, Oakland, Penn State, Georgia – all were within a few possessions of winning their first-round games or won their first round games. Even Indiana State gave Syracuse some trouble. Part of it was the effect of good teams and good scouting; but a certain level of non-elite talent all over college basketball made upsets very plausible. Then again, Kentucky and all of their elite talent struggled against Princeton… so maybe it’s just parity, the lack of great teams in the tournament in general.

Pittsburgh’s lackluster performance: Now, I knew that Pitt didn’t have the raw talent to win a championship; maybe not they didn't have the goods to get to a Final Four. But getting bounced in the second round is a cause for concern, and the way they got bounced was completely unexpected. In the first round, they let a mediocre 16-seed in UNC Asheville hang around for a full half.

And if it wasn’t for the Panthers’ offensive rebounding, their poor shooting could have made that game too close for comfort.

And then… the defense failed them. I know Brad Stevens is a great coach, and the Butler Bulldogs have big shot makers. But I expect better defense than the 57.7 effective field goal percentage that the Pitt defense gave up. They lost on  last second mistake, but the fact that the game was that tight says something about the quality of the Panthers at the end of the season.

Jimmer’s swag must play defense: For all the talk that the Brigham Young Cougars were a one-man team, it took a strong overtime effort from the Florida Gators to take out the Fightin’ Mormons. BYU defeated a decent Wofford team and a solid Gonzaga team that had run over St. John’s with defense, despite their size deficiency. The Cougars ran, they locked down the perimeter, and they gave their attacking team a chance to win, even without their missing center Brandon Davies. They made the Sweet Sixteen despite not having interior depth - a big surprise, considering so many had them being upset. They lost to a 2-seed. No shame in that.

Connecticut’s run and Jeremy Lamb: I didn’t think U Conn’s "fatigue" would do them in after playing 5 games in 5 nights in the Big East Tournament, resting for almost a week, and then playing the same 2 games in 3 days that other tourney teams would play. I thought their lack of non-Kemba talent would do them in. But the Huskies’ role players have really done a great job, and beating an Arizona team that really came on in the tournament is a great achievement.

Alex Oriakhi’s rebounding and post defense have been good, but Jeremy Lamb’s ability to be a consistent, efficient scoring threat – and a lankily pesky defender – have helped Kemba Walker captain the Surly Ship Calhoun into another Final Four.

The success of the First Four: Not only did viewers get two days of evening doubleheaders, but the two at-large teams that earned entry into the Field of 64 really showed well for themselves. Everyone knows Virginia Commonwealth’s story; but Clemson’s match against West Virginia was competitive late, and the format allowed some solid teams to have one more chance to prove their worth. Of course, the grouping also included Alabama-Birmingham's Blazers, and that team was awful.

This is no endorsement of further expansion; VCU is still a questionable inclusion by any metric, and most of those last teams in still don’t have a real chance of winning a championship – nor would they suddenly experience VCU’s ridiculous and uncharacteristic shooting bump. The tournament was enhanced by VCU but it wouldn’t be enhanced by Boston College, or Miami. Let's just keep that in mind.

Ricky Keeler: 2011 NCAA Tournament Recap Even though the St. John’s Red Storm were ousted in the first round by Gonzaga, I can’t remember a tournament that has had this many upsets and been this exciting. Here are my top 5 things I did not expect coming into this tournament.

Brandon Knight’s team goes further than John Wall’s did: It sure did not look like Kentucky would have a deep run in this tournament after their near first round exit at the hands of Princeton. But Brandon Knight has been the second best clutch player in this whole NCAAs not named Kemba Walker. He hit the game winning shot against those Tigers in Round One and then hit one of his only shots with 5 seconds left to upset the number one overall seed in the Sweet Sixteen.

The Wildcats have shot the three so much better this tournament compared to last year, including 12 in the Elite Eight against UNC. Finally, who would have thought Josh Harrelson would have made this big of an impact?

The Butler did it again… with a new star! Last year, all the talk around Brad Stephens’ club was Gordon Hayward, but Shelvin Mack went under the radar. Mack is only averaging a point more this year (15.9) compared to last year (14.1). He has hit every big shot when Butler needed it, including the big 3 against Florida late in overtime. If Kemba wasn’t in this tournament, people would be talking about Mack a lot more. This is a Butler team that won the most wide open region in a decade, but like last year, a lot of people didn’t think they could win their first round game. Now, they have the most experience out of the teams left this year. Amazing!

I was impressed with Connecticut and Marquette who were two of three teams (Syracuse being the other) that came into the tournament on a boost of confidence in the Big East. The Golden Eagles were one of the last eight teams in and were able to make the Sweet Sixteen and we will get to U Conn later.

The Mighty Kemba Roars: Coming into the tournament, I thought the Huskies would eventually run out of gas. I should have known better after seeing them in person at MSG in their buzzer beating win over Pittsburgh. Walker is on the verge to become one of the best players, if not the best player in the history of Connecticut basketball. But it is not all about Walker now. Freshman Jeremy Lamb has hit big shot after big shot in this tournament, especially in the regionals with the crowd mostly against them. Whether it was his big three to beat San Diego State or his steal late in the game against Arizona, Lamb has provided Walker a complementary scorer that could land Jim Calhoun another national championship. They proved me wrong, but at least I was right that Duke didn’t make the Final Four.

Shaka OutSMARTed me: The top story is all about the VCU Rams. They were just a mere 11 seed that most people did not belong in the big tournament to begin with. They won five games against the major conferences, winning four of them by double digits. This team is motivated with the agenda to prove all the haters like Jay Bilas, Dick Vitale, and mostly ESPN wrong.

For the record, I had more of a problem with UAB in the NCAAs than the Rams. Bradford Burgess and Jamie Skeen have been the shooters in the tournament averaging 40 percent from the perimeter this year. Plus, you have to love the fire in point guard Joey Rodriguez who wanted to prove to a Morris twin that the road wasn’t ending in San Antonio.

With a eventful Final Four to come, just remember all the close games, buzzer beaters, and memorable moments from one of the best NCAA Tournaments in the last 10-15 years.