Last week in Rumble in the Garden + recruiting updates

Share All sharing options for: Last week in Rumble in the Garden + recruiting updates

It's time to catch up with the happenings around the St. John's Red Storm. There has been news about the current coaches, the past head coach, an eligibility rumor, a new Letter of Intent in to St. John's, some Final Four guarantees, and notes on potential 2012 recruits.

Read on, below the fold.

+ Steve Lavin, as you probably heard, was diagnosed with prostate cancer before the Big East season. Coach Lavin will be doing treatments during the offseason. The original post has some notes on prostate cancer, but the message is - take it seriously. Lavin's cancer was caught early, and he should make a full recovery; his summer camps will go on as scheduled.

+ Former St. John's coach Norm Roberts, who has been working for local SNY.tv doing in-game and post-game analysis and some high school ball alongside Tim Welsh, has an assistant coaching position at Florida under Billy Donovan.

+ Mike Dunlap has been a candidate on many of the mid-major job openings around the country - UNLV, Wyoming, and Fresno State to name a few. Dunlap was a longshot for the UNLV job. And now that UNLV has hired BYU assistant Dave Rice, it looks like Dunlap is here to stay for at least another year, tutoring the incoming freshmen.

+ 2011 combo guard Phil Greene has sent in his Letter of Intent to St. John's, formalizing his commitment. He'll be in the backcourt mix next year with Nurideen Lindsey, returnee Malik Stith, and high-scoring D'Angelo Harrison. IMG Academy's twitter (@IMGAcademies) posted a picture, with Phil Greene in the middle of what looks like a large roster of ballers: 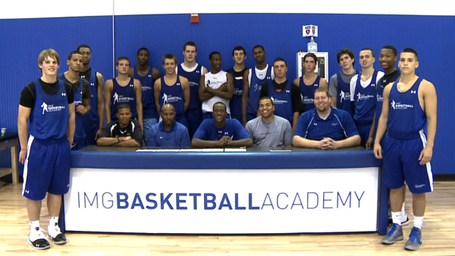 + St. John's 2011 recruit Amir Garrett came away from the Ball Is Life all star game with the dunk contest crown and an MVP award. And he comes with confidence, stating that St. John's is going to the Final Four next year.  D'Angelo Harrison, the signed guard from Texas (also 2011), also dropped a Final Four prediction for St. John's next year.

Now, we know that's probably not going to happen, but you have to love that this incoming class has big things on their mind, and think those big things are realistic.

+ A rumor went around from the NY Rivals site that 2011 wing/ forward JaKarr Sampson might not qualify for NCAA play next year. His grades had been some concern, even when he was home in Akron at St. Vincent-St. Mary (where LeBron James starred as a high schooler). Part of the reason Sampson moved on to the Brewster Academy was to get eligible for college, after all. But those ineligibility rumors about Sampson were put to rest... though one never knows until each player actually makes it to campus and suits up. But it looks good.

+ Per Twitter, 2012 guard/ wing/ all-around-problem Kyle Anderson lists St. John's in his final four teams, along with Seton Hall. He wants to commit before his senior season at high school starts. He's 6'7" but has point guard skills.

+ Top-50 recruit Ricardo Gathers from Louisiana is interested in visiting St. John's in the near future. He's built like a defensive end - a la Sean Evans or Villanova's JayVaughn Pinkston - at 6'6" and 240, and is improving his perimeter skills. He'd be a nice get for the Red Storm. We'll take a look at what's been written about him later this week.