Yesterday: Looking back on the 2011 Red Storm offense/ defense 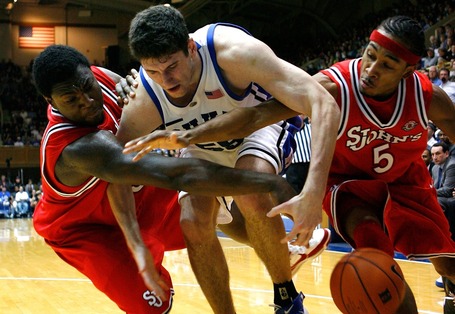 It's hard to look at a guy with Dele Coker's size and not think "that dude's going to be a problem." At 6'10 and over 250 pounds, Dele Coker is a physical specimen, as they say. He looked to be lab-crafted to be the ideal low post center to battle in the Big East for the St. John's Red Storm, once he got his skills to the Big East level.

He got recruiting looks from a number of high major schools, including Indiana, Oklahoma, and Pittsburgh; he was coveted. But Coker never became an impact player. What happened, below the fold.

From the New England Recruiting Report back in 2006:

Coker possesses an incredibly impressive combination of size, strength, athleticism, and agility. His game is highlighted by his ability to block shots, rebound the ball, and finish strong above the rim on just about anyone.

Alas, he came in as a project with great tools, and he leaves as a project. His best season was 2009-2010, a season that also saw him suspended at the end of the season for not fulfilling his academic requirements at the end of the year. That year, Coker scored 2.3 points per game, sometimes looking like a real post option in games against the likes of the burly Georgia Bulldogs.

This year, a new regime looked at Coker, worked on developing him, and inserted him in the starting lineup 8 times to play the opening tip enforcer. Coker logged over 10 minutes 4 times - against Fordham, against Northwestern, against Syracuse in the blowout, and against Notre Dame.

Most games, Coker didn't show up in the box score. That will happen when a baller only gets 5 or 6 minutes per game.

(One of the headers in the table is confusing? Check out the RITG Tempo-Neutral primer.)

Dele never turned into the great rebounder that he seemed he could have been his freshman year. He was able to reach the rebounds, but not hold on to them. His turnover rates were astronomic, his shots often didn't fall. And prorated to 40 minutes, his rate of fouling would have had him kicked out of every game.

What could he have done with more time?

Coker had a nice mid range jump shot that seemed more reliable than Coker's shot between 1 and 5 feet. He blocked a fair number of shots and was willing to hit an opponent hard. He gave four years to the Red Storm, and here's hoping he finds a basketball or other career that's worthwhile and fulfilling.

This is the second of a number of posts that will look back on the St. John's Red Storm's resurgent season in the Big East. Check the site daily for player by player report cards & more.
Follow Rumble in the Garden (RITG) on Facebook | Follow Pico on Twitter | Follow RITG posts on Twitter