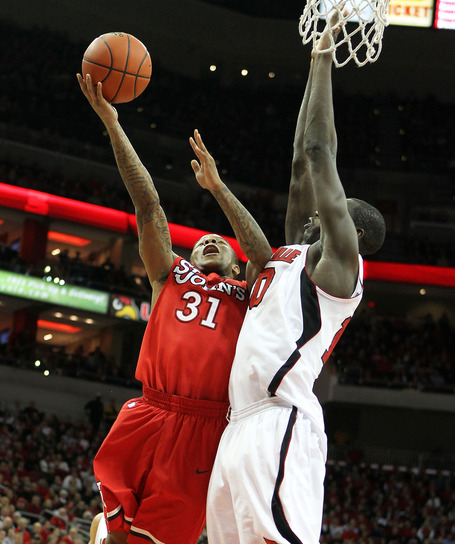 In an interview with Rivals last summer, Steve Lavin was quoted as saying "[Malik] Stith is gonna surprise people with his development and work ethic. He's training like a Green Beret or a Navy seal."

Now, I wouldn't have a Navy SEAL run my basketball offense, even if he'd played for the Naval Academy, but we got the meaning. The hard-nosed guard from Brewster Academy was not backing down to the challenge, despite possibly playing in a conference that he's overmatched for.

Gotta love that desire, and desire has made good ballers out of all manner of players. And fans wondered, could Malik Stith become a factor at the point guard? Maybe the starter?

As you might know, Malik Stith didn't take the point guard position over. He was a bit player, relegated to emergency duty once the calendar turned to conference play.

Small, tough, and burly, his training and physique hasn't translated into many positive basketball plays.

But looking at the numbers, maybe he's a little more than he seems. Could he be a sneaky surprise veteran guard next year? Read on, below the fold.

Lavin has a history of giving players some more playing time in the non-conference season to see what they can do, to prep them to be ready for emergencies, and to rest his starters starters.

Stith's early playing time may have been no different. Malik II garnered more minutes than Malik Boothe against Ball State, Drake, Arizona State, Wagner, St. Bonaventure, and against Fordham, where Malik Boothe was held out for part of the game due to injury. Stith got 23 minutes per game and provided some tough defense - especially against Arizona State, where his pressure frustrated the Sun Devil guards, and was a big part of getting the Red Storm the Great Alaska Shootout championship.

But in that period, Stith also shot an effective field goal percentage of 41.1%, and had a high in assists of 5 against Ball State. Not heady numbers.

Stith did improve from his freshman year. Of course, his freshman year was a poor performance all around - middling assist numbers coupled with very poor shooting. His 2010-11 stats overall and in conference play:

Malik Stith's offensive rating rose - Stith improved his free throw shooting to over 74%, drawing a decent number of fouls for his time on the court (Free Throw Rate, FTR). He also cut down on turnovers, hit a few more 2-point jump shots, and nailed the first 5 three-pointers of his career. Stith also increased his steal rate to the point where he's at times an asset in pressure defense, despite his size and fairly high/ prohibitive foul rates (which rose in Big East play).

That said, Stith is still a substandard option at guard right now. A 2-point shooting percentage of 41% overall - and 28% in conference play - doesn't scream "offensive guard". He struggles to convert at the rim. He doesn't have the hops of Boothe to get into his defender, nor the quickness to get to better spots. Many of Stith's shots came off of the jump shot, which isn't yet automatic. Malik Stith needs to get strong enough to convert through contact.

Former Johnny Eugene Lawrence (class of 2008) is a good comparison for Stith. Lawrence also struggled to get over 40% shooting inside the arc, and struggled to be an efficient shooter from outside the arc. But Geno, despite his prodigious turnoveracity, also was a tenacious defender and a strong assist man, and was strong at drawing fouls against contact.

But of course, Stith's game was devoid of assists. He had FIVE assists in conference play.

For a guard who dribbles a lot, that's a terribly low number, and is an indication that he's not making the offense hum - or perhaps can't get around a defender for long enough to make an impact pass. Or maybe he's not seeing the court very well. And in conference play, his defending was great for gamble plays - he maintained strong steal rates - but didn't seem strong staying with his man.

With a number of quick and talented guards who can also shoot coming in, this is an area where Stith needs to improve if he wants to get more playing time. It's nice that Stith is sticking around as a change of pace, tough guy guard. But if he wants to get anything more than blowout time, he needs to

a. learn to pass
b. draw fouls and/ or convert inside the arc
c. become a beast defender like Travis Walton of Michigan State was, or Chris Kramer from Purdue.

If he can do two of those things, he might have a lot of value as a veteran presence and defensive annoyance, the gatekeeper to what may be a very skinny front court. Stith has tenacity, a strong physique, and a desire to compete. With another summer of training with Rico Hines, he can increase his skill set to be an impact veteran amongst the roster filled with youth next year for the Red Storm. I wouldn't bet against him.