Share All sharing options for: He has spoken: God's Gift Achiuwa to St. John's - quotes, notes 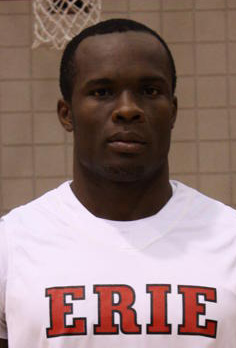 I'm just happy that this long recruiting saga of God's Gift Achiuwa is over. The Rumble in the Garden was slowly becoming a religiously-themed basketball blog.

Achiuwa committed at a press conference at Erie Community College, with his Erie CC coach Alex Nwora - who helped guide Achiuwa through the recruiting process - nearby.

Reports had been flying that God's Gift Achiuwa, the strong power forward/ center from Nigeria whose recruiting we've been following here on the Rumble, was destined to commit to the St. John's Red Storm.

The New York Post's Lenn Robbins broke the news last night about Achiuwa's commitment, and God's Gift has been considered a St. John's lean for a while.

"They are a running team and that’s what I like, fast paced basketball. I also like the winning tradition of the new coaching staff. They came into the St. John’s program and turned things around in less than a year. I think that’s a good indication that the program is on its way back."

Who is God's Gft Achiuwa? Well, God's Gift is his real name, for one. More on God's Gift Achiuwa, and what to expect from the forward, below the fold.

No really, that's his name? Also from the press release:

God’s Gift (20) is the third of six children born to Eunice and Donatus Achiuwa of Port Harcourt, Nigeria. He has one older brother, Promise, and two younger brothers, God's Will and Precious. He also has one older sister, Grace, and one younger sister, Peace.

Told you his family's serious about that religion.

What did he do in JUCO? Achiuwa played at Erie Community College in the Buffalo area and starred, though at the lower Division II level of Junior College basketball. God's Gift is 6'8" and over 230 pounds; he averaged over 23 points, 11 rebounds - 5 offensive rebounds per game, 6.7 defensive boards. Achiuwa shot 56% from the field, shot 64.9% on free throws.

He also apparently took just under one three-pointer per game, hitting 36.7% of his shots, which isn't a terrible conversion rate, especially for a big man.

But... On the flip side, Achiuwa also had about 3 turnovers and 2.2 blocks per game. The turnovers don't seem terrible, since it seems he played 30+ minutes per game and was a main scoring option.

The blocks, considering the level of competition, are an indicator that fans shouldn't expect God's Gift to send shots into the seats on a regular basis. Hops or not, he's still listed at 6'8" and doesn't face highly-talented bigs, according to those who watch the conference.

A somewhat comparable JUCO big man: Consider how South Florida recruited the coveted Jarrid Famous from Westchester Community College, a Division I school in the junior college ranks. Famous averaged 23.5 points, 12.3 rebounds and 3.0 blocks in his two seasons. But in two years with the South Florida Bulls, he averaged 9.6 points, 6.5 rebounds, and .6 blocks. Not terrible, but Famous lost minutes to more talented forwards on Stan Heath's roster.

He ended up being a stopgap forward in Tampa, a bit of height on a team in need of bigs. Famous kept the Bulls from having to play Toarlyn Fitzpatrick too quickly, and allowed Augustus "Gus" Gilchrist to use the full extent of his inside-outside game.

What to expect from God's Gift Achiuwa? Expect something similar from God's Gift, despite the size difference, which helped Famous' block and rebound totals. From accounts, Achiuwa is more agile than Famous ever was, but he is also shorter.

He'll be the post defender that frees up the likes of Dwayne Polee II and JaKarr Sampson to play their natural roles a little bit away from the basket. Achiuwa will be a muscular body to bang with bigger Big East post players while Sampson and Norvel Pelle get acclimated to the college game; and a rebounder to compete in the paint.

Six-plus total rebounds and competent post defense? A man big enough to take blows from Syracuse's and Louisville's bruising front lines, along with UCLA's and Arizona's? And a man who can do that and run the floor? If God brings that hustle and doesn't practice like he's, ahem, "God's Gift" to the Red Storm, that's a nice package, especially as the Red Storm sort out the scholarship classes.

What's the fun Twitter hashtag going to be? #GodIsOnOurSide, obviously. Unless you have other suggestions. 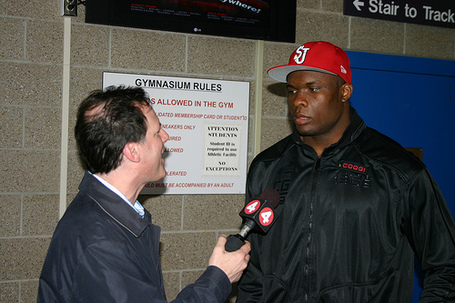