Too early to project next year - link dump

Share All sharing options for: Too early to project next year - link dump

While guys with no experience but a father who makes politcal donations are tapped for solid-paying government jobs... meanwhile, federal data transparency sites may be in danger... in wholly unrelated news, you needed to get discs from the Federal government to find out which banks took advantage of emergency lending during the financial crisis... Glenn Beck is leaving Fox News, if you haven't heard... Japan got hit with another earthquake... Laurent Gbagbo's loyalists in the Ivory Coast tried to snatch the Japanese ambassador (why's he still there?!)... there's some golf tournament or something on, so they say... a gunman kills six at A Rio de Janeiro, Brazil elementary school... Mariska Hargitay adopts a baby (from the US) to add to her family; she already has a son... There are a bunch of words that you're using incorrectly; does it matter?... you can get classic Atari games on your iPhone...

Here's what our country looks like - using a font called StereoTypeface (from the This Isn't Happiness blog): 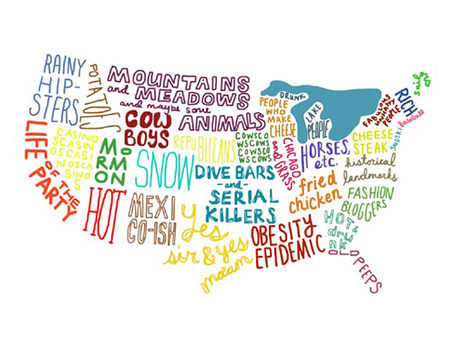 Some top-25 links... because this is the right time to evaluate players and teams, right? When players can still declare to go pro, when the final pieces of recruiting are still to come... I'll wait until May, thank you very much.

NBC makes mention of St. John's as a team that will just miss the NCAA Tournament. That's a solid and worthy projection.

ESPN has final conference rankings, the Big East is second - the early upsets hurt the league in their calculations.

Recruiting news, and other notes, below the fold.

St. John's has one more scholarship to use, and needs a strong big man to help hold down the post.

God's Gift Achiuwa takes an official visit to the University of Cincinnati this weekend. He is slated to visit St. John's in two weeks as his last currently-scheduled visit.

Other news and notes

Today's updated mock draft from NBA Draft has Justin Brownlee going in the second round and no Dwight Hardy.

Mike Dunlap is a candidate for the Nevada-Las Vegas job, but this site says he's a smokescreen candidate. Fresno State hasn't hired their coach yet, but Texas assistant Rodney Terry looks like the man there. Still, things are looking good for having Mike Dunlap back in the fold at St. John's.

Jim Ferry takes the job at Manhattan College. He did well getting the Long Island University Blackbirds to the NCAA Tournament, and moves up a league. Who will LIU get? Importantly, since some had mentioned Tony Chiles' name as a possibility at Manhattan, that means Chiles is staying to put his recruiting skills in action.

Dan Martin catches up with the All-Star game results from the St. John's recruits at the All-American Championship.

Amir Garrett posterizes some dude. Watch the arm extension into the net. EMPHASIS.