Share All sharing options for: Phil Greene at the Chicago United Hoops Classic 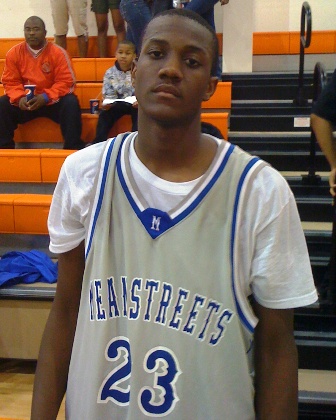 Yesterday, DePaul’s Sullivan Center (the on-campus facility, used for practice and by the women’s team) hosted the Chicago United Hops Classic, an anti-violence all star game with proceeds to go to a scholarship fund dedicated to former Chicago Bull Norm Van Lier and an organization called Purpose Over Pain.

There was some high-major Chicago talent in the building - a pair of recruits going to Wisconsin* and a pair going to Northwestern, among others.

Another high major talent, of course, was St. John’s recent signee Philip Greene. How did the future Johnny combo guard do? An evaluation, below the fold.

*One of the Wisconsin players, Frank Kaminsky, was very good for a big man - agile, athletic, with some range. If he puts some weight on he could be something nice for Coach Ryan. But he's not our subject.

It’s important to remember that this was an All-Star game, not the place to see where players have a sense of how to play; it’s more a place to understand what their "natural" game is in a fairly open environment. And in this game, the West Side dropped 15 points to start (without allowing a point from Greene’s South Side team - with Greene on the bench) and never looked back.

The game was surprisingly physical. A lot of what would have been fouls weren’t called - it is an exhibition, after all, and no one goes to see free throws. And one player crashed into the media table diving for a loose ball. Players landed hard on the floor. Players defended the paint and defended their man.

As for Phil Greene...

The good: Greene didn’t play a lot of minutes, not starting the first half but starting the second. He came in a wave of 5 players, mostly playing off the ball.

Phil Greene was as wiry as advertised... and as athletic. He showed a smooth handle, dribble through traffic, and some solid hops to tap at missed shots. He also showed - when he had the ball - that he could change speeds well, and his faster speed can definitely challenge an opposing defense. On his drives, he looked to dish the ball to teammates, and displayed a little Oh You Fancy highlight-reel vision.

Greene scored something like 7 points (I didn’t get a box score). He scored on a foray into the paint, putting back his own misses with long arms; he drew two free throws; and he hit a three after some fancy between the legs dribbling. He also missed a three-pointer that he shot while dribbling to his left. Nice stroke.

The bad: On the flip side - and this is said in context of this being an All Star game - Greene’s defense seemed disinterested. Again, not that one expects tight defense; but one expects to see players try for flashy steals. And one expects a player not lag behind almost every play, or lose his man in transition... though Greene did get back after he lost the ball against the West Side team. A lot of standing around where it seemed that Greene could put those long arms to work being bothersome in passing lanes (when someone passed).

Additionally, Greene does need to pack on a few more pounds; he didn’t look like he could finish through contact. He didn’t try to power through anyone... which is wise. Kaminsky is 6’11" and some of the other West team members were clogging the paint.

Sometimes, especially in the first half, it was easy to forget he was on the floor. But when he had the ball in his hands, he looked like he could do some special things. I’m excited to see him in a Red Storm uni next year. He reminded me of an offensively-minded Mike Poole (of Rutgers) - long, athletic, brimming with potential.