Nothing said "excitement" like Dwayne Polee II's highlight reels. All he did was effortlessly get over the rim and throw down. Fast as a colt. Jumps like a bunny. With a frame that still had to fill out, Polee screamed potential.

On a team with so many seniors, his rawness wouldn't be exposed. He'd have a year to work things out and become a player to be reckoned with, to turn those athletic gifts into winning talent.

The freshman Polee - who Coach Lavin dubbed "Bambi" for his wide-eyed youth and deer like running, one supposes - played in every one of St. John's 33 games as a rookie, starting 27 of them.

And he scored 4.4 points per game; he often played until the first media time out in each half, battling for the tip and then watching from the bench.

For those who expected Polee to supplant another member of the senior core, it had to be a disappointing result. But in that skinny lanky Polee package, there is a very interesting player - but one with an indeterminate position. Read on, below the fold. 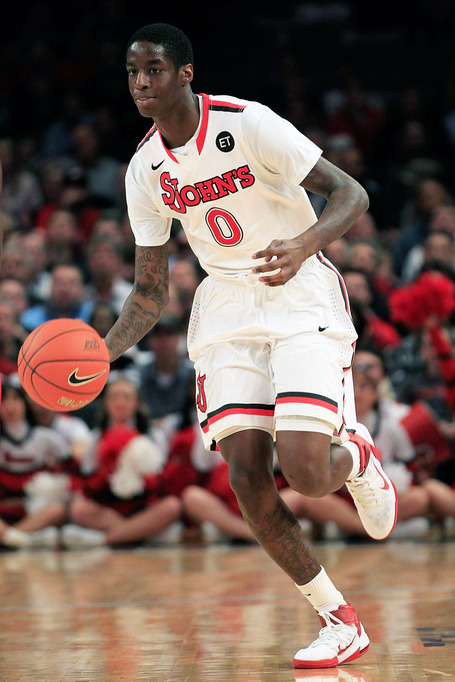 Low turnover rate. Polee certainly took a back seat to stars like Dwight Hardy and Justin Brownlee; he took the occasional shot, but generally deferred to his elders.

In some ways, that's a good thing. While his possession percentage was that of a role player, Polee didn't hurt the team with turnovers in his limited minutes. His turnover rates, in fact, were very good - especially for a freshman. And he maintained a solidly low turnover rate (16.1%) in Big East play.

Good 2-point shooting. Polee took most of his shots inside the arc. Granted, there weren't many. But Polee showed a really nice pull up jumper around the foul line, hints of a reliable floater, and could easily rise above the defense for his shot, and that resulted in 53.7% shooting inside the arc in Big East play. Polee didn't mess around with trying to get all the way to the rim for a flush - where if a player doesn't finish, poor shooting percentages and turnovers can happen.

Great athletic quickness markers. Though not listed, Polee's steal rates were decent, and his block percentage of 5.3% of opponents shots would be good for a center. He is a good athlete, quick off the floor; and when he wants to he can pass. He can even dribble a little.

Still learning. Polee's game is nascent, and it shows in his defense. The Red Storm played zone, but there were a number of times where Dwayne possibly tried to guess his man's next move and got left, making the zone collapse on a penetrator. Sometimes, Polee stood around, seemingly looking for where to go on defense... practice, repetitions, and film work will help him improve. But Polee has to learn to be - and want to be- the defensive player he could be.

Rebounding: On top of that, Dwayne Polee's rebound rates in the table above are only okay for a player of his size and ability. Watch a replay of Polee's possessions in a game. He struggles to battle for position on the glass, even when he's close to the coming rebound.

This summer, along with protein shakes and all the pasta Polee can eat, Dwayne needs to get some MMA practice... or something to drill more physicality in him. His blocks - as blocks often do - came while he wasn't defending the ball. Which is great, but when matched with almost any kind of post player, Polee found himself getting out of the way of a bigger man in the paint. It happened against Cleveland Melvin, it happened against Mouphtaou Yarou.

Physicality and position. So you can get that right now, all that athleticism and jumping is in serious need of strength, no matter what position... and where does he belong, anyway?

Polee doesn't get to the free throw line very often, drawing free throws at a rate of .19 per shot attempt. That rate would be poor for the most-contact free outside shooter. For a player who doesn't shoot from the perimeter at all, that needs work. Dwayne Polee obviously has some range. But that three-pointer wasn't falling... and if Polee's not going to rebound or be physical in the paint, what's his position?

Even on running teams, someone has to put a body on a body from time to time.

Final shot: I am excited to see what Polee comes out of the summer's training. He's obviously got skill and length, quickness and tenacity. But he needs to improve at a position instead of being the ultimate in tweener. There are a lot of players who would love Polee's minutes, and it's up to Dwayne Polee to decide to be excellent.

Given his skill set, Polee seems like he's a few rebounds away from being a rebounding small forward who can be the de facto 4 man for Steve Lavin.

This is the second of a number of posts that will look back on the St. John's Red Storm's resurgent season in the Big East. Check the site daily for player by player report cards & more.
Follow Rumble in the Garden (RITG) on Facebook | Follow Pico on Twitter | Follow RITG posts on Twitter