Jeff Goodman tweeted earlier this evening that Arizona Wildcats starting point guard Lamont Jones - better known as Momo - will be transferring from the Wildcats program. AND that Momo Jones might seek a waiver to play immediately due to family illness... and he'd look to play for the St. John's Red Storm. 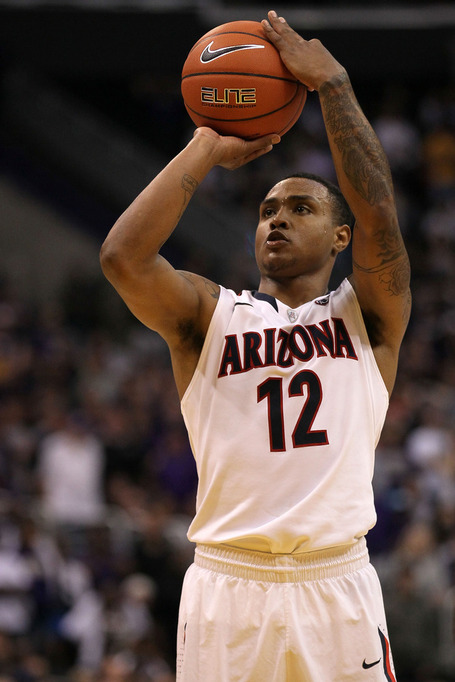 That's just a rumor from sources, but in college ball, sources often know what they are talking about. Adding credence to the rumor: Jones is from New York, and played under current St. John's Director of Basketball Operations Moe Hicks when Hicks was the coach at Rice High School in the Bronx.

He's a baller who was solidly regarded coming out of Rice... then American Christian where he transferred... then Oak Hill where he transferred his senior season. (He also committed and decommitted a number of times from colleges - Southern Cal, Virginia Tech also thought they had their point guard.)

Transferring is in his blood. But he seemed to find a home in Arizona with Sean Miller's Wildcats. He's been said to be homesick before, but the transfer news is a surprise.

Momo might just come home-home and provide the Red Storm with a dynamic, experienced point guard who took his team to the brink of a Final Four, losing to eventual National Champion Connecticut Huskies and his old Rice High School teammate Kemba Walker.

If Momo came to play for Steve Lavin and St. John's, how would this work? Is Momo Jones worth it with the great incoming class at St. John's? Let's take a look, below the fold>>

I'll be straight up: Lamont Jones has a chuck problem. And an inconsistency problem. Jones captained the Arizona squad, sure, but he wasn't a point guard... and sometimes that seemed to land him on the bench. He's tough, athletic, and many teams wanted him.

The good of Jones? From Arizona Desert Swarm:

Jones is a powerfully-built, strong-willed defender and most importantly, a competitor. Just check out his numerous game-winning shots in his two-year career at Arizona as proof.

The bad? He's not really a point guard.

Arizona had some players who were not adept at getting their shots off, true, but with all that shooting... he shot 45.8%  on his two pointers and 30.8% on his three-pointers last year. That's a lot of chucking and missing. The secret to chucking and missing is having enough explosive games that keep the confidence high - like the 27 points he dropped on California (in a TRIPLE OVERTIME game), the efficient 17 he dropped on Southern Cal (who play a slow pace and defend well), and a few other solid performances.

But there are also a pair of 0 for 6 outings.

The 3 for 12 game in a rematch with Southern Cal.

And a free throw rate (free throws earned/ field goals taken) of under 40%, which is fine, but not stellar...

BUT. Momo ends possessions without turning the ball over (17.7% turnover rate last season in conference play). He's aggressive and doesn't get caught up in bad positions where he sends the ball out of bounds or gets stripped. He's quick, he's tough, and gets some props for his on-ball defense, despite a low-ish steal rate (1.8% in conference play both years).

Despite his not passing enough, there's some good to his game. But is it the kind of game that will lead the Johnnies to a winning season? Can he improve with tutelage from the detail-oriented Mike Dunlap, the guard guru Rico Hines, and his old high school coach Moe Hicks? (edit: it's pointed out by chrisbk128 on Twitter that the team's improvement last year was in part to improving shot selection.)

Or will he shoot the team out of games while better options in the fantastic Red Storm recruiting class - like Nurideen Lindsey, D'Angelo Harrison - could be developing on the floor? And how does this affect the possible transfer of Ryan Harrow? Or the development of Malik Stith?

What do you think?