With the word that Momo Jones isn't likely to come to St. John's due to an interpretation of NCAA rules, chances are that the St. John's Red Storm roster is set, barring a VERY late transfer (Ryan Harrow is still undecided, but seems to have finished his visits). There is always a chance of a late European import. It's happened before and it will happen again. 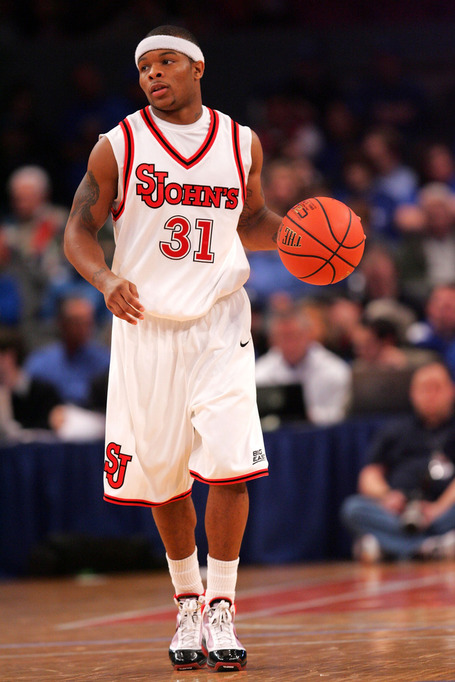 But as the recruiting for 2011 has wound down, it's time to look at what spaces are available for basketball scholarships and visually depict the roster situation for the Johnnies from now through the 2015-2016 season. This was a request I got from a reader last week by email, but the composition of the roster was in Momo flux until just a day ago.

Next year's Red Storm squad, despite the talent level of the coming storm of recruits, does come with flaws. The lack of strength in the paint is the most glaring, but other flaws will emerge when the "Noble Nine"* join sole returnee Malik Stith on campus. (Catch up on his game with Malik Stith season review).

Additionally, the Red Storm need to fill roster spots with backups who will emerge as stars when other players leave for professional opportunities, graduation, or homesickness/ lack of playing time. As it is, the Johnnies have 10 players, so everyone should see time on the court, and the Red Storm should also have room to take on a transfer at mid-year if the recruiting of freshmen doesn't yield the desired results.

Below the fold, the scholarship table with some notes.

*if you have a better nickname for the nine newcomers than the Noble Nine, feel free to leave it in the comments; we're always open to suggestions.

The St. John's roster as it currently stands and will look, if all players stay in Queens until the end of their eligibility. Years are listed as the end of the season, so the 2011-12 season is listed as 2012, with the players' expected eligibility year listed below.

X's designate open roster spots, with the number of available spots listed in the table.

The walk-ons: Jamal White and Cameron Edison were walk-ons listed on the roster last year. Jamal White was a transfer from Long Island University; Edison came from California. Both logged time in games; Edison got nine minutes on the season and Jamal White saw two. A forward named Alex Smart from New Jersey was on the roster at some point, but saw no minutes according to records; he's 6'6" and the team could use a tall practice player. Gerard Rivers is a guard from Lancaster, CA, a bit north of Los Angeles; he has tweeted that he is coming to St. John's, possibly for a preferred walk-on spot.

2011: In 2011 The Red Storm will likely try to play an uptempo style and a lot of zone; man defense would expose the very thin frontline of God's Gift Achiuwa, Norvel Pelle, and likely Jakarr Sampson. With the departure of Dwayne Polee, that is the full rotation of post players, barring a late walk-on.

2012: The Red Storm currently have two scholarships to use for 2012; Ricardo Gathers is on their list and has come for an unofficial visit, and Kyle Anderson has the Red Storm in his top 5. Both players are top 100 players. The class will need at least one player who can bang in the paint; the wings are loaded with talent, and the four guards (Lindsey/ Greene/ Harrison/ Stith) have the talent to hold down the two spots... if Sir'Dom Pointer doesn't work into the starting lineup.

2013: For 2013, forward BeeJay Anya from DC, forward Jordan Washington from New York, and Jersey small forward Jason Boswell are available. The graduations of God's Gift and Malik Stith leaves room for the insertion of a dynamic player in the backcourt or in the paint. There are also players with NBA potential on the roster, and it wouldn't be a complete surprise to see one leave early for professional opportunities.

2014: Currently, there is only one slot for a 2014 recruit, but in an ideal world Jevon Thomas would be on campus, joined by 5 players who can step into starting roles in 2015. At the very least, a post player should be getting significant time, and another should be waiting in the wings, if not already playing.