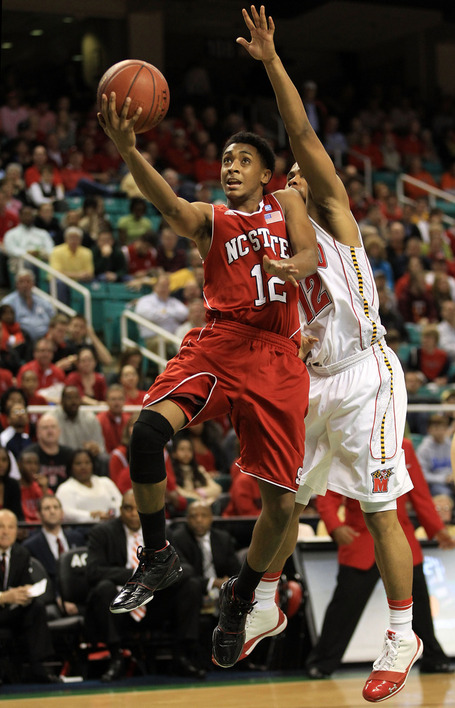 A year ago, 5'11", 155 pound point guard Ryan Harrow was getting ready to come to North Carolina State and save Sidney Lowe's job in his freshman year.

A big job for a relatively little guy, despite being universally considered a top 30 player.

Since then, Harrow had a lackluster season, his embattled coach was fired, and Ryan Harrow decided to transfer from the Wolfpack after they hired their new coach, former UCLA assistant and Alabama head coach Mark Gottfried.

This afternoon, Ryan Harrow tweeted that he was looking at St. John's, Kentucky, Louisville, Texas, and Georgia as landing spots to continue his education and training.

Other schools have reached out to Harrow as well.

Could he be the dynamo triggerman that will make the Red Storm's collection of scorers hum? And who is Ryan Harrow? Let's take a look, below the fold>>

Credentials: Ryan Harrow is a former 5 star recruit from near Atlanta, Georgia.He was the Gatorade Player of the Year and the Georgia 5A player of the year. Nothing to sneeze at - Georgia is a real talent hotbed.

Harrow was coveted by many... but decided to stick with Sidney Lowe and NC State.

And that was a story in itself. Lowe had been roasting his buttcheeks on the hot seat almost as long as Norm Roberts did at St. John's. And much like Norm, Lowe was considered a good guy, a great asset to the program... but wasn't producing the good on-court results anyone wanted.*

Harrow came to NC State anyway, along with CJ Leslie.

Was he any good in his freshman year? It didn't work out. Harrow was far from a savior, and couldn't take the reins of the team fully. He played about half the team's minutes, splitting time with unspectacular point guard Javier Gonzalez to create a mediocre tandem in the ACC.

Harrow scored 7.2 points per game in conference play, shooting 36.7% on twos, 23.3% on his threes. Some poor shooting; but his assist rates were solid, as was his free throw shooting, indicating that there's a better shooter in there.

But he was no savior.

Why would St. John's want Harrow? Ryan Harrow was a 5-star point guard. And he understands that he needs a year or so to develop physically. It's hard for a small point guard used to scoring to do his thing against advanced defenses; he wants a system where he can get out and run.

His physical ability is undeniable:

And it's possible to waive off his struggles to the adjustment to college. There's obviously a very good, skilled player in there; and an experienced player would be a real help to the Red Storm as they look to make real NCAA Tournament noise in 2012-13.

Why wouldn't St. John's want Harrow? Ryan Harrow's supposed to be dynamic, but he really struggled to make an impact at NC State. He shot poorly and couldn't draw free throw attempts.

With the matchup zone defense the Johnnies play, Harrow's size would seem to be an impediment. It would be hard for him to switch defenders without becoming an easy "shoot over him" target.

What does he do to the scholarship situation? While it's great that Steve Lavin is playing in the Transfer Pool like his predecessors, Norm Roberts and Mike Jarvis would not, it's not great that Harrow won't be eligible until 2012. Harrow will be a sophomore, like almost everyone else on the roster - with no other signings, there would be 7 other sophs, and Dwayne Polee II, Malik Stith, Nurideen Lindsey, and God's Gift Achiuwa. Harrow's signing means another large graduating class (unless players leave early/ transfer).

What's more, the Red Storm have a point guard committed for 2012 in Jevon Thomas, and a trio of combo guards hoping to emerge at the point in Phil Greene, D'Angelo Harrison, and Lindsey.

The Rumble will be tracking the Harrow situation; the first noise about where Harrow would transfer seemed to center around Kentucky. But that's just noise and rumor.

Don't have too read those "emotional a**" tweets/posts anymore!! #winning Was like reading an online channel of "Lifetime"! #boyestrogen lol

*Maybe they should have known Sidney Lowe was no savior; Lowe was brought back because he was a link to Jim Valvano glory days, and had a .257 winning percentage in the NBA.