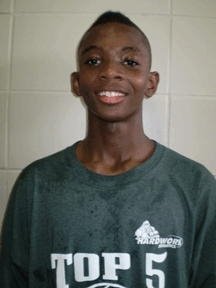 I want Jevon Thomas to be special. I normally don't write statements like that. But like me, he's of Jamaican parents, and like me, he hails from Rosedale.

Unlike me, though, Jevon Thomas' life story is a tough, heartbreaking one fraught with movement, tough times, poverty, and murders. Which helps explain his struggles in school and his struggles settling in to his academics.

Thomas is the St. John's Red Storm's lone signee for the 2012 recruiting class. He was signed to be the slick point guard that will grow to direct the lightning-quick attack. There are lingering rumors that his academics are in such poor shape that he will need an extra year (or worse) to be eligible to play for a Division I school.

He's less talked about than some of the other 2012 prospects. Part of this could be due to Jevon's already being signed - and college coaches not having a need to sniff around or ask the recruiting services where he's leaning. In part it's because Thomas has moved around AAU teams this year.

And part of his lack of exposure could be that he's not playing on one of the hotter AAU teams this summer, meaning the scouts aren't coming to breathlessly write about him or his teammates.

More on Jevon Thomas and how he's played this summer, below the fold>>

St. John's has been on him since before Steve Lavin arrived. Last October, after attending both St. John's and Villanova's Midnight Madness celebrations, Jevon Thomas felt comfortable enough to commit to the Red Storm for 2012.

Jevon Thomas is a quick guard and a good playmaker despite his fairly small size (5'11", 170 pounds). From ESPN:

Jevon is the consummate playmaker. He is super quick with great end to end speed, terrific court vision, and a super tight handle. He changes his speeds masterfully, is equally dangerous going left as he is right, has a super low cross-over dribble, and quick bounce at the rim. He has a great feel with the ball in his hands and is very crafty scoring himself with floaters and crafty wrong footed lay-ups at the rim. Defensively, he's very active with his hands being as quick as his feet. Thomas has even developed into a consistent shot maker from the perimeter when left unchecked.

A well-rounded player at the one spot, Thomas is a true floor general and leader of the offense. He is adept at both scoring the ball on his own and getting his teammates involved in the action. In addition to scoring off the bounce, Thomas has a nice stroke and can also hit shots from beyond the arc. He does need to get more consistent from long range, though.

Despite the fact that Thomas is overly fancy at times, there is no questioning his feel for the game. He has a good basketball IQ and has a nice sense of what to do with the ball when it is in his possession.

The Metro Hawks are not a star-studded lineup and it shows - they're 2-8 so far after two sessions of the Nike Elite Basketball League (EYBL) AAU sessions. Keep that in mind when looking at his numbers.

While playing with this team of likely midlevel recruits, Jevon has displayed some real strengths and some flaws.  Jevon Thomas has taken up only 17% of his team's possessions - in other words, he's not putting up a lot of shots or points. But assists don't factor into possessions... the good and bad, below.

The good: solid passing and decent shooting. Jevon Thomas is only dishing out 3.6 assists per game. But on a team that's not shooting particularly well, he is assisting on 26.3% of the Metro Hawks' shots; and that's in 23 minutes per game. Thomas is also shooting 50% inside the arc, and 33% outside the arc - where he hasn't taken many shots (1.4 of his 7.6 per game). He's not trying to puff up his scoring totals, obviously.

The bad: slippery hands. Thomas has an 1.2/1 assist to turnover ratio. The ratio is still positive, but that's a whole lot of turning over for a lead guard - nearly 27% of his possessions end with the ball in the other teams' possession.

Along with the turnovers, Thomas is shooting 62% from the free throw line. he's only getting to the line 3.2 times per game. It's a great rate when compared to the number of times he shoots, but the numbers make him look like a player who could stand to make more impact on the court.

Final shot: Jevon Thomas has obvious quickness in a small frame. While a point guard who plays his passing role is welcomed in this era of "playmakers" who only pass when their lane to the basket closes up, it would be nice to see Jevon Thomas actually take over a game and make some WOW plays, to put his skills together to will his team to win.

That said, he's got skill and should be an asset to the Red Storm. He may not step on campus and dominate, but he could be a great NYC point guard.

EYBL continues at the end of May in Los Angeles. And the Metro Hawks should be competing in Baltimore's Nike Elite sessions this weekend.