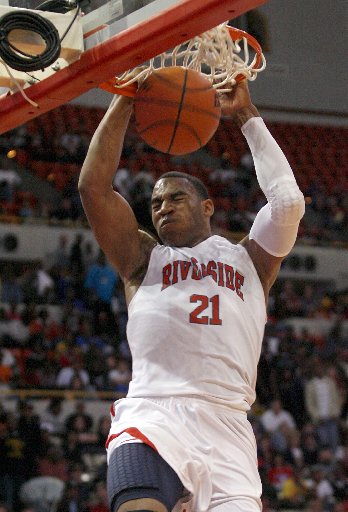 Ricardo Gathers is a beast. Let's get that out of the way. He's such a beast that I feel bad that he can't walk the earth like a normal man, can't just go to a burger joint and get a cheeseburger and fries.

Gathers leaves no question that he's an athlete. He's not some sneaky under the radar type, you know he's there. Folks think he's a football player; he's 6'8", 240 pounds, and jacked with muscle, why wouldn't they think that?!

The Louisiana Gatorade Player of the Year for Riverside Academy, Gathers is from Laplace, Louisiana - just 30 miles west of New Orleans and the supposed Andouille Capital of the World.

Ricardo Gathers has no shortage of teams following him as he goes into his senior year. He is scheduled to visit the Red Storm on May 12th, and says Steve Lavin and the Red Storm are doing the best job recruiting him ($ req'd).

More on Ricardo Gathers, below the fold>>

Big, fluid, he has the look of a football player but the skills to pay the bills on the court.

Ricardo Gathers (2012, Louisiana Select)- Gathers is always going to be that undersized interior player that causes people to question why he doesn't play football. He is also going to be that player in college that produces night after night and helps his team win. He is a warrior in the paint and is developing a jump hook to help him score over bigger opponents.

Gathers has been getting a lot of love from college coaches. On Steve Lavin and Tony Chiles, who are recruiting him to St. John's. Per Zagsblog:

"They basically told me I’ll come in and bring a lot of energy to them and create a lot of matchup problems," he said. "Just coming into New York, the atmosphere of the city and the background and history of the city, as far as basketball goes it’s one of the biggest basketball meccas in the nation."

But Syracuse is after him, as well... as is Louisiana State, Texas, and Arizona.

Gathers participated in the first two sessions of the Nike Elite Basketball League (EYBL) tournament and was grabbing rebounds like an alpha dog grabs bones. The good and bad:

And more, he's drawing fouls - 10.3 fouls drawn per game over the 10 sessions. he's doing work down low, and is obviously talented and athletic.

Gathers has had no problem getting shots, taking 34.5% of his team's attempts while on the floor. One might say that's the rate of a man whose hungry/ hasn't had enough to "eat", but it's good to see that despite not being a ballhandling guard, he's going to go out and get his.

He's not a passer, he's a finisher. And despite his thirst to dunk, he doesn't turn the ball over (11% of possessions), a real asset in a big man. Granted, AAU ball isn't renowned for its defense, but guys love a steal - it ends up on the stat sheet.

The bad: J-missin'? Ricardo Gathers is hungry to shoot, and he's putting up 19.4 points per game... but it hasn't been the most efficient performance. Gathers is shooting 49.7% from inside the arc - not bad, but not as great as one might want from an interior player, especially one who gets 3-4 offensive rebounds per game - which should end up being layups.

Worse, he's taken 15 three-pointers... and Gathers has missed 14 of those shots.

He's drawing 10.3 free throw attempts per game... but only hitting 4.7 free throws (45.6%), a Shaq-esque conversion rate. That's a real detriment for a big man and a power player.

Final shot: There's obviously a lot to recommend here. But Gathers really has to work on his shooting skill if he's going to shoot that much. Still, Gathers is an obvious talent and despite some talk about his "short arms", he sure can produce shots and rebounds down low against good competition; I'd expect him to be a force in college, whether that school is in Queens, NY or not.

St. John's needs this kind of player to be a boss down low, with physical play and rebounding acumen.

And start at :23 seconds on this one: