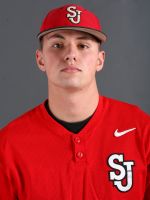 Junior shortstop and First Team All-Big East member Joe Panik has been selected as a semi-finalist and one of 30 amateur players who could win the USA Baseball Golden Spikes Award.

Awarded to the best player of the year, Panik is a leading candidate to win the award. Panik has a .402 batting average, tied first in the Big East conference, with 9 HR and 56 RBI. Panik leads the Red Storm in slugging percentage (.645) and on-base percentage (.513).

Panik also led the Red Storm during the Big East Tournament while batting .471 with two doubles, three RBI, four stolen bases and a .583 on-base percentage. Panik was named to the All-Tournament team for the second year in a row.

The Golden Spikes Award will be narrowed down to 3 players on Monday June 6th. The winner will be awarded live on MLB Network June 15th at 6pm.

Next Up In St. John's baseball