The roster shakeup that powered the 2011 St. John's season

Share All sharing options for: The roster shakeup that powered the 2011 St. John's season

St. John's hiring of Steve Lavin was a ballsy move. Bold, kind of innovative - the move of a program that was swinging for the fences with a high risk/ high reward hire.

Bringing a coach in - and the excellent staff of assistants - was the first step for the Red Storm. The players still have to decide to buy in to what the coach is selling. Some teams have young, hungry players; some coaches even have the chance to recruits some of their kinds of guys for their first team.

That's not the Red Storm's story.

Coming in, the team had a 10-man senior class who had shown flashes of promise. In that group was a core of starters with three years of experience and chemistry on the court. But that group had often fallen short of winning. The formula had some nice pieces; but the Johnnies languished at the bottom of most offensive categories for the three year the 2011 senior class had taken the floor, with a defense that had its moments, but was not good enough to win anything but games against the league's bottom-4 teams with a smattering of other middle-level and upper squads.

There wasn't much chance to plug in new players or to change the team dynamic. The Red Storm staff made a couple of changes, shaking up the rotation by limiting the role of a pair of players (who will be the next two in the Red Storm in Review series). 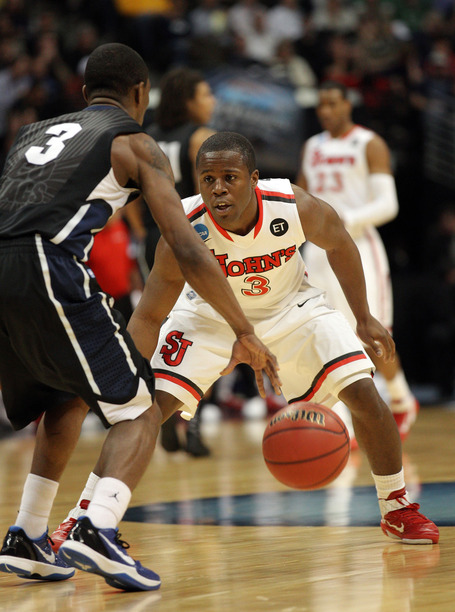 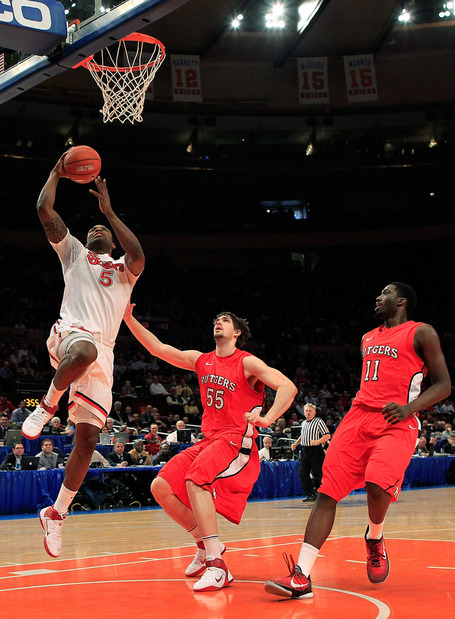 The first move was the more logical: benching Sean Evans.

Evans was a gamer, fairly physical yet agile. But offensively, his style was to freelance, dribbling in the lane, on the break.

Sometimes it worked. But his ability off the dribble was never good enough to get him over the coveted 50% percentage from the field. Which is to say, sometimes it didn't work. Evans was able to get shots off, and was an excellent offensive rebounder, but he didn't bring consistency to the court.

Combined with his lack of hops, range, and the other big man things he was deficient at, it's no wonder Sean Evans found himself talking with the assistant coaches during games and butting heads with assistant coach Mike Dunlap's more disciplined style.

The second move was far more risky. Cutting down on Malik Boothe's minutes made sense. He was an offensive liability with offensive ratings struggling to touch 90 (i.e., he scored less than a point per possession, which is pretty bad at his level). But Boothe's defense at the point and ability to dribble were skills no member of the team had. That lack of options seemed to mean Boothe was a lock to start all year.

But the staff turned the rotation upside down.

In the absence of Evans, time went to Justin Brownlee, who started as the Red Storm's center in most games. And instead of starting Boothe, Steve Lavin went with Dwight Hardy.

The Justin Brownlee for Evans move made some sense. Evans was already undersized, and Brownlee is a better, smoother athlete, one with more offensive skill. Brownlee needed to be reminded not to take bad shots and stick in the paint - which worked well at first, and not as well late in the season, as we will see next week.

But handing the ball to Dwight Hardy was a curious and dangerous move. Hardy's defense the previous year was a little lacking. His handle was good but didn't look ready to contend with pressure; and he was much more of a shoot-first guard than any kind of distributor.

Hardy was much the same player, but his ability to create shots for himself more than made up for the things he couldn't do as a point guard. And why not? Many college teams play with shoot-first lead guards with less ability than Hardy. Coupled with a team-wide mandate to push the ball and pass to the open man, to space well and run hard on the break, it actually worked for Hardy. A point guard wasn't needed to get the ball to Hardy; he has solid catch and shoot skills, but excelled in isolation, creating shots of free throw attempts. Even though he was no big passer, the team had a solid offensive flow.

For Boothe, it worked as well. He played fewer minutes, but thrived in a bulldog defensive role - he was pesky, he was strong, he made the passes he needed to make.

For Sean Evans, the move was less fruitful. He clashed with the coaches. He considered transferring. But Evans came around in the non-conference season to become a solid contributor. From the Duke game on January 30th through the rest of the season, Evans played double-digit minutes (except against Seton Hall), making his mark on the rotation. And in a nice move by the coaching staff, Sean Evans had the honor of doing to postgame interview, nationally televised on CBS.

Gutsy moves by the coaching staff, moves that paid off.