We're spending part of the month taking a look at what the Big East competition brings back to Big East play - or how the fill their personnel gaps from graduation, transfer, or players who left early for pro opportunities. Next up: the Syracuse Orange. We're starting from the alphabetical caboose of the league. See more Mind the Gap posts.

In short: Syracuse returns a lot of talent and may be the favorites going into the season in the Big East... if they can replace the skills and musculature that Rick Jackson brought to the table. 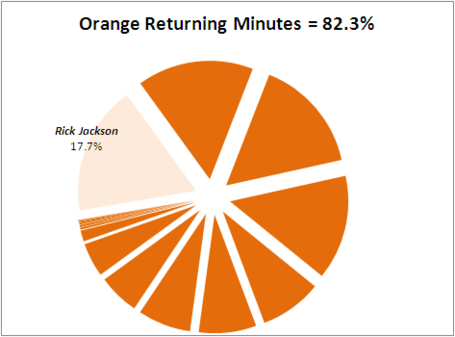 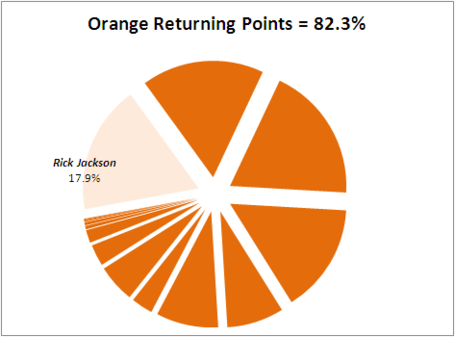 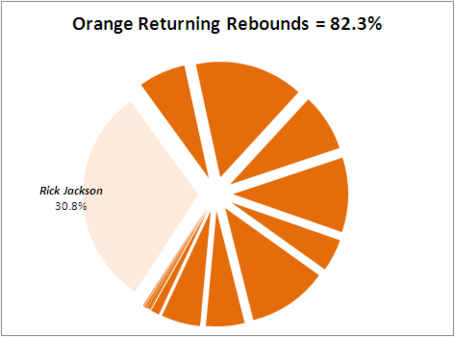 Syracuse's main losses: Rick Jackson. The Orange lose one player, but that one player was the anchor to their interior defense, the efficient scorer in the paint, a prodigious shot blocker, and even willing to pass and force steals. That's a lot to "replace." But basketball isn't always about replacement, sometimes the schemes adjust to the players.

Rebounding is not a necessarily unique talent; a team can find good rebounders, work on their technique, and fill the holes from the year before. And one strong rebounder can lower the rebounding numbers for players across the boards; the rebounds available are finite. But with only five players on the court, can one approach the board-clearing production of Jackson while also replicating his ability to get buckets?

The main dogs are Kris Joseph, Scoop Jardine, and Brandon Triche. They have their patterns - Scoop is inconsistent and loves the try and score (where he sometimes fails), and could be better with the ball. One should note that he had two turnover free games... against Colgate and DePaul. Brandon Triche is good as a scorer and as a facilitator, and late in the year started getting to the free throw line more - with his size, that's probably a good idea. And Kris Joseph is smooth and often takes shots he can make.

Behind them, Dion Waiters has a nice stroke, and aside from one clunker of a game, shot well from the perimeter. He probably deserves more time. James Southerland got more time in the middle of the season, but his low-scoring/ low-impact outings got him left on the bench for a number of late-season Big East games.

Fab Melo's two nice late-season games were sharp, but those games were also against St. John's and DePaul, two teams with weaker front lines. Melo's rumored immaturity/ self-control issues and the criminal mischief charge could cut into his playing time - he might get a bit of a suspension from the team or by the school (though probably won't spend any time in jail), once he gets his day in court. Baye Moussa Keita, on the other hand, made an impact all year, even though his time was limited. Despite a lack of size or an outside shot, C.J. Fair scored the ball well and corralled rebounds.

Mookie Jones hasn't yet threatened to transfer this year.

If he can handle the banging in the paint, Keita should replace Rick Jackson's rebounding solidly. But playing him - a player who took up a tiny 10% of the team's possessions - means that either the other 4 players will have to pick up the slack from the outside in, or that the Orange will have to rotate big men to generate a mix of defense and scoring.

The returning backcourt of Jardine and Triche don't rebound much, possibly by design. Kris Joseph has the size and ability to grab more rebounds, sure, but Fair showed more on the glass. Fab Melo showed signs of life last year, but not enough to project him as the main cog. Rakeem Christmas, despite being (supposedly) limited on the offensive end, can cut into the playing time of the other bigs.

Unrelated to the hole in the Orange roster - where are Trevor Cooney and Michael Carter Williams going to play? If they can hit their outside shots and defend well enough, one of them will take some minutes from Triche and Jardine. Or the Cuse will play small. Syracuse was interior-oriented last year; this year will probably see a few more outside shots.