We're spending part of the month taking a look at what the Big East competition brings back to Big East play - or how the fill their personnel gaps from graduation, transfer, or players who left early for pro opportunities. Next up: the South Florida Bulls. We're starting from the alphabetical caboose of the league. See more Mind the Gap posts.

In short: With Stan Heath struggling to win games, South Florida needs high impact plays from the forwards and from the newcomers Victor Rudd and Blake Nash. 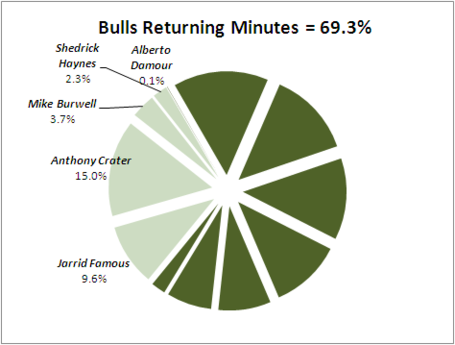 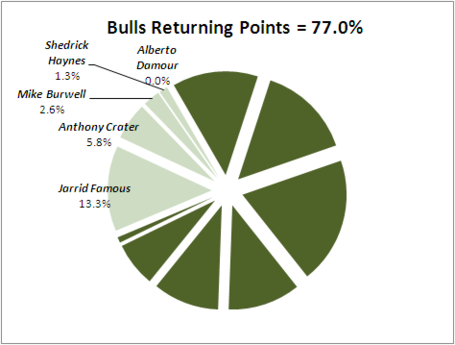 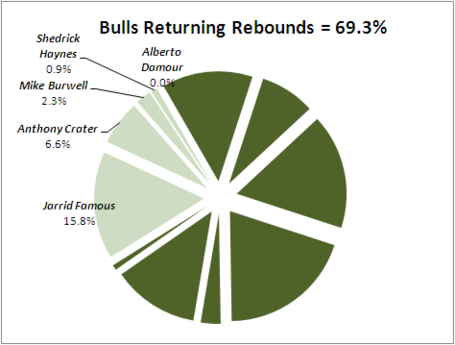 South Florida's main losses: Rebounding: Jarrid Famous came to South Florida as an attractive big man - about seven feet tall, coveted by high majors, supposedly an impact player. St. John's fans had heard that maybe losing Famous to South Florida wasn't a game-changing loss. And Famous was solid for the Bulls, but the guys coming in after him may fill his shoes and then some.

Ball handling: Anthony Crater was the most impressive player I watched last year. How can a player with speed log over 33 minutes per game yet barely dent the box score every-single-game? To be fair, his assist numbers were solid, but a player who turns the ball over 2.5 times per game and otherwise doesn't use any possessions? And when he uses possessions, he misses from inside, outside, and standing still? That is a feat or Mario Stula-esque proportions, except Stula had no discernible talent.

Despite being the primary reason why the returning minutes are so much lower that returning points and rebounds, he emerged from a number of options to remain the primary ball handler, and will need to be replaced.

Defense of some sort: The South Florida defense was pretty bad. The offense was just as bad - both were 14th in terms of offensive and defensive efficiency. But on defense, teams worked inside the arc and scored, despite the defensive height; and opponents also got to the free throw line. Will the defense be worse without Famous' height?

Shaun Noriega is the team's most efficient returning scorer; he is exclusively a perimeter shooter, and came on late in the year. Can he do it over a whole season? Does it matter that it's the only thing he can do on the basketball court? Hugh Robertson gets minutes based on his defense, and can rebound from the guard/ wing position. Jawanza Poland has a great name and great hops, but needs to translate those skills into scoring plays, especially inside the arc. He shows signs of being a good defender and is a solid passer.

Gus Gilchrist has a lot of talents, but at times (really) overrates his jump shooting ability over his ability in the post. It never hurts his confidence, so that's a plus if you're Gus Gilchrist. We should all believe in ourselves. Ron Anderson can be hard to stop, and can get some rebounds. Of course, sometimes he can't get those rebounds. Toarlyn Fitzpatrick is a burly helper in the post, and has the best shot-blocking rate on the team. He got good minutes from mid-January until mid-February, but then never saw more than 12 in a game after that.

The 6'7" Rudd has a lot of athleticism, but coming out of high school, was known to settle for outside shots. And at Arizona State, his stat line shows him settling for outside shots. Rudd's not wildly accurate from outside, so that could be an issue. But Stan Heath puts his talent up there with the Dominique Jones and Kentrell Gransberry class of player at South Florida, so look to Rudd to start filling in the "offense" gap for the Bulls.

Blake Nash is a scoring point guard who should get first look at starting point for the Bulls. It'll be a departure - an eager scorer (a la Dominique Jones) replacing a ball handler who spent the game strolling around the perimeter, reciting lines from Friday or whatever his favorite movie is? That should help an offense that doesn't have many dynamic creators.

The incoming centers will help Stan Heath put out lineups with size, and cover for Anderson and Fitzpatrick when they need a blow. But the remaining players have to get better at stopping penetration, getting opponents to shoot more long jump shots and less inside the arc. And if opponents are going to shoot so much inside, they should be confronted by outstretched palms and physical (yet non-fouling) hostility.