We're spending part of the month taking a look at what the Big East competition brings back to Big East play - or how the fill their personnel gaps from graduation, transfer, or players who left early for pro opportunities. Next up: the Seton Hall Pirates. We're starting from the alphabetical caboose of the league. See more Mind the Gap posts.

In short: The Pirates shed a number of the previous regime's transfers and recruits, and replace them with less-touted talents. Seton Hall get better with a number of under-the-radar recruits? 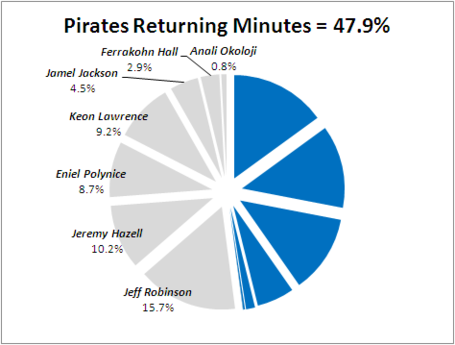 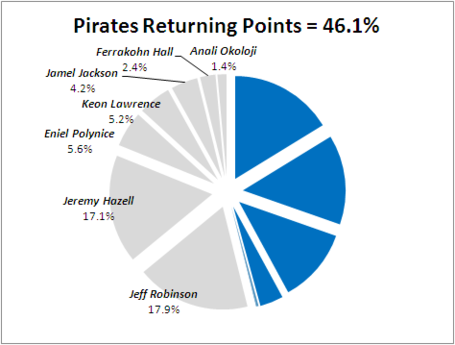 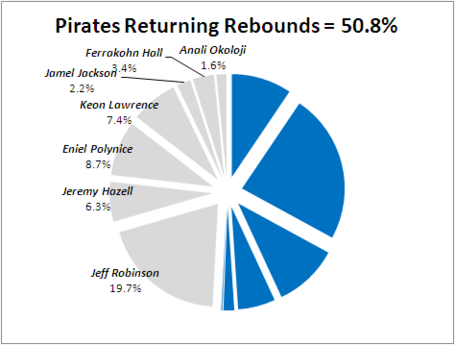 Seton Hall's main losses: The alpha-dogs: At first blush, the Pirates seem to be losing a lot of offense in Jeff Robinson and Jeremy Hazell. Both players scored efficiently; in fact, no player who took 17% of the possessions when he was on the floor was more efficient than those two. Which isn't to say they were great; they just shot the ball before any defender could force them into tougher situations or turnovers.

Perimeter defense: While being mediocre (and that's being kind) offensive players, Keon Lawrence and Eniel Polynice added an athletic dimension to the perimeter defense.

Point guard Jordan Theodore returns to captain the good ship Pirate once more. He wasn't a terrible scorer, but could be more efficient. he can shoot the outside shot, but with no dependable point guard behind him, he might have his hands full just running the team.

Herb Pope anchors the rebounding effort in the paint, but even before his heart condition, his game involved a few shot attempts he probably should have thought through a little better. He's not bad, but he's not going to carry the young Pirates unless he transforms into a far better interior scorer. Fuquan Edwin is the closest thing the Pirates have to a possible alpha-dog scorer. He struggled at times and played next to a greedy Jeremy Hazell, looking to break the three-pointer record; that was a factor in his scoring decline after January 8th. Given 30 minutes or more, he put up points. Against St. John's, he looked like a sharpshooter. And he also doesn't turn the ball over much.

The big men from across the Atlantic - Patrik Auda and Aaron Geramipoor - will get time to show how they have improved.

The only player returning who can reasonably fill that big-time scorer role is Fuquan Edwin. Does he have the talent and persistence? Can the young players put up points? Is that even a goal for Coach Kevin Willard, or would he be happier with a dedicated defensive squad?

Despite losing the two efficient players who used more than 17% of possessions, the losses aren't all bad; the Pirates also lose a number of players whose scoring efficiency was woefully substandard, but who took shots anyway. The incoming players actually don't have that high a bar to climb to improve on the team's offensive performance, especially since Jeremy Hazell missed a lot of time and returned to the team an ineffective shooter for long stretches.

But of course, the Pirates had a losing record.

There are definitely a few scorers waiting in Edwin and apparently Aaron Cosby; and there is some size in the paint in Geramipoor and Pope and Auda. But Kevin Willard loves strong man-to-man defense, almost over a high-scoring offense (his teams at Iona and last year's Hall squad were all defense-centric). Can the new perimeter players play defense to his liking? And what if the members of the team who play competent defense and the ones who play solid offense aren't the same people?

The Hall will be interesting. They could be terrible. They could also pest their way to the middle of the Big East pack.