We're spending part of the month taking a look at what the Big East competition brings back to Big East play - or how the fill their personnel gaps from graduation, transfer, or players who left early for pro opportunities. Next up: the Providence Friars. We're in the middle of the league; look back and see more Mind the Gap posts.

In short: A thin roster will switch gears to a defensive style; can they find enough defensive talent and scoring to compete nightly in the Big East? 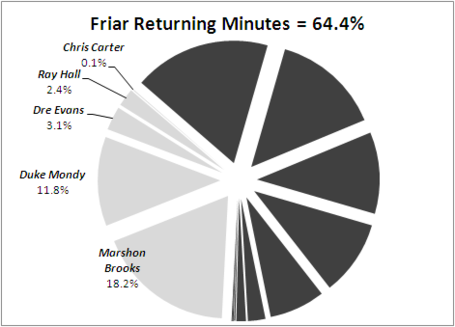 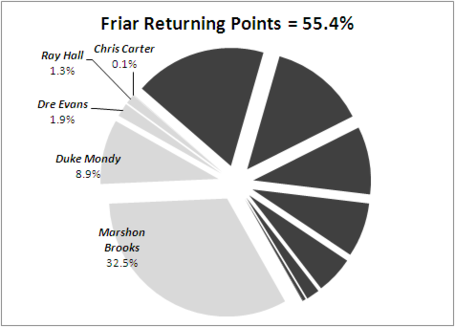 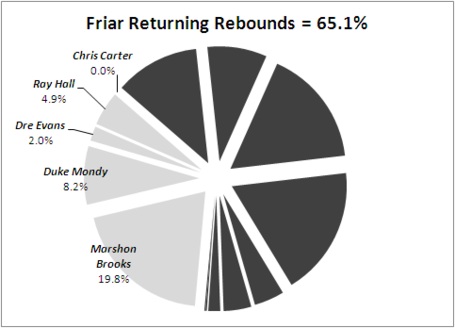 Providence's main losses: MarShon Brooks carried the team... to a 4-14 Big East record, 15-17 overall. When a singularly talented scorer takes that many shots - even though he scored efficiently - is that harmful to a team like Providence? Probably not; Brooks did pass the ball a decent amount for a player with such high possession usage (29.7% of the team's possessions). His teammates weren't particularly efficient around him, despite not turning the ball over. The Friars will obviously miss him, and it will take a lot to keep them out of the Big East basement.

Duke Mondy also left the Friars; he was an outside shooter who missed a lot of outside shots, and many of his shots from the line.

Friar fans may have no affection for Keno Davis and his style, but despite the absence of any real defense, the Friars did one thing very well - shoot so quickly/ aggressively that they were one of the best in the Big East at not turning the ball over, giving them chances to score. One would like to think they can maintain it, but I think it's doubtful because of:

The Friar returnees: Here's something that maybe only I find interesting - what happened to Vincent Council? Statistically, it looks like the Big East figured him out... or he lost a significant amount of his ability to score inside the arc. He drew fewer fouls in Big East play (32.5% free throw rate in 2010-11; 54.8% in 2009-10), though he took a slightly higher percentage of shots. His assist rate went down slightly, but his turnover rate, steal percentage, and free throw shooting percentage remained about the same. It's like a scouting report went around the league titled "how to make Vince Council go 3-11 from inside the arc". He's not particularly short, should he be that bad inside the arc? If his first year was a fluke, that's problematic; he's the best guard they have and he can't shoot from the outside.

There are other returnees. Gerard Coleman was a bony freshman who was supposed to guarantee points; "guarantee" is apparently too strong a word, especially against major conference opponents, but he can and should get better. The Friars need him to be, well, MarShon Brooks and carry the team; with MarShon gone, can he take and make shots? Did MarShon's hunger to score hurt Coleman's game? Meanwhile, Bryce Cotton didn't turn the ball over at all in limited time, but also missed a lot of shots, while not taking many.

Up front, Bilal Dixon and Kadeem Batts' offensive rebounding seem to fit into Ed Cooley's style, assuming what he runs at Providence will be similar to what he did with the Fairfield Stags. Ron Giplaye (on the inside) and Lee Goldsbrough (from the outside?) will have to provide some scoring and defense in expanded roles.

Providence doesn't have much in the way of a high-profile schill pumping up the fortunes of the program. But it is possible that this could be a far better team with attention to defense and a slower concept. They could also be at the bottom of the Big East.

The Friars need one of the big men (Batts/ Dixon/ Giplaye/ Henton) to be able to defend Big East wings while rebounding and scoring inside. If one of those players can get some buckets, and the rest of the team can play the intense defense that Ed Cooley demands, who knows? Maybe the Friars can surprise. After all, Cooley's defense, by Ken Pomeroy's stats, was a top-25 defensive club, forcing turnovers and forcing missed shots.

Kiwi Gardner has a great chance to get some minutes; he's been a speedy, dynamic, highlight reel player. But can he be that 5'8" bucket of electricity without turning the ball over? Can he lead a team for 15-20 minutes a night?

A return to freshman form for Council and better scoring from Coleman is badly needed; but how will they, and the rest of the Friars, play in this slower, more defensive scheme?