We're spending part of the month taking a look at what the Big East competition brings back to Big East play - or how the fill their personnel gaps from graduation, transfer, or players who left early for pro opportunities. First up: the West Virginia Mountaineers. We're starting from the alphabetical caboose of the league. See more Mind the Gap posts.

In short: The Mountaineers have to replace more minutes and points than any team in the Big East this side of St. John's, who lose their entire team (save one). 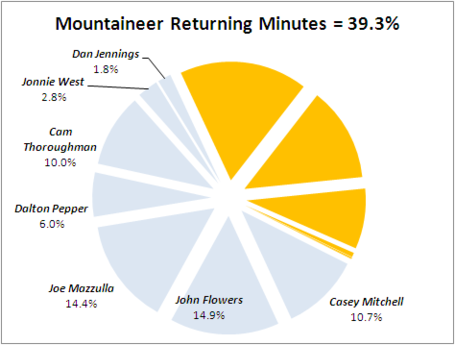 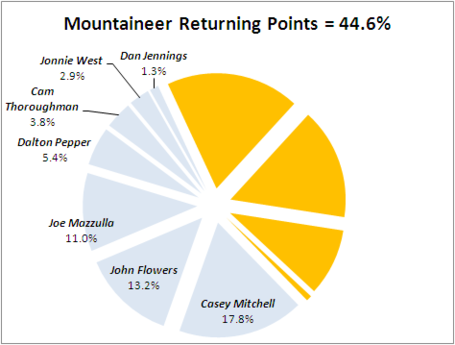 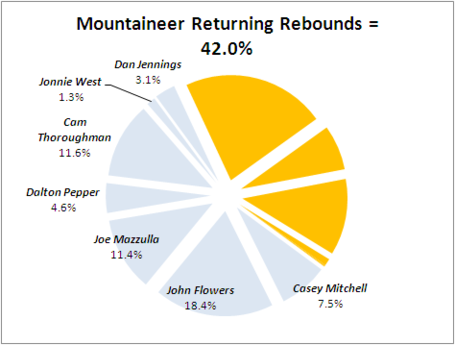 A shot-taker: The "big" loss for West Virginia would seem to be shooting guard Casey Mitchell. He was both efficient (109.6 offensive rating in Big East play, 112.5 rating overall) and eager to end possessions, shooting on 34.5% of the team's possessions in conference play. But whatever Mitchell said or did to Coach Huggins between games was obviously not gritty and endearing. Huggins suspended Mitchell for violating team rules in January, and when he came back, Casey Mitchell saw a lot less time on the court. In that time, the Mountaineers beat Connecticut, Notre Dame, and Clemson in the NCAA Tournament - without much help from Mitchell.

A versatile forward: John Flowers just feels like a Huggins player. Sometimes, he doesn't look like much, but he defends a lot, bothers shots, and gets after rebounds. He earned minutes as the season went on, logging 35+ on the court in 10 games - mostly after mid-January. He was efficient (109.7 O-rating in Big East play) though he didn't take up a lot of possessions; but coupled with capable rebounding and some of the best blocked shot numbers per game in the Big East (2.6 blocks per), you knew he was there.

A passer: "I'm the best at what I do, and what I do ain't pretty" is a quote from Wolverine (Marvel Comics character? Big adamantium claws? Did I go too sci-fi there for you?). Joe Mazzula may not be the best, but he was pretty good at not shooting very often but distributing well, assisting on 29.1% of the team's shots when he was on the floor for Huggins' Mountaineers.

Along with those three, the Mountaineers have lost a number of the bodies they threw out to play Huggins' brand of physical defense.

Kevin Jones has been pretty much the same player since stepping on campus, though he was better playing off of Devin Ebanks and Da'Sean Butler; he's probably not going to become some superstar overnight. Darryl "Truck" Bryant, is great for tough physical play, less great for finesse skills like "shooting from deep" or "finishing at the rim" or "not turning the ball over." Deniz Kilicli has potential, but is far, far too turnover-prone. He has strength and potential when he's under control. Kevin Noreen was injured much of last year.

One of the newcomers will have to take major minutes at a guard spot - unless Cottrill return really happens. Jabarie Hinds would seem to fit the Mountaineers' style, and adds a speed dimension. If any of the small forwards can shoot a bit and dribble a touch, they will see time. At least one of the incoming players will have to bang in the paint when Kilicli is in foul trouble, possibly Dominique Rutledge.

But few teams have as many question marks in key areas as the Moutaineers. They have a great coach who knows what he wants, and presses his players until he gets it. Love or hate the man, Bob Huggins is the guy to shepherd a surprising performance from a tough-minded group of no-names. But how long will it take for the Mountaineers to grasp the level of intensity needed to succeed under Huggy Bear? Can the newcomers shoot and score consistently in the league?