Did you ever think the Johnnies would be this rich?

Right now, the Red Storm is projected to be flush with talent once the 2012-2013 season kicks off. Steve Lavin and the staff are at the point where, barring non-qualifiers or sudden transfers, the roster is good enough to develop into a national force that year.

Unlike the 2011 class, which needed to be the foundation for the program, the 2012 recruits will be (hopefully) the final pieces of the puzzle for the St. John's basketball program - the dash of salt in the recipe, the flair on the design, the last pieces to put the band together. Or in the words of former coach Norm Roberts, the "sprinkles on top".

Already, coveted forward Ricardo Gathers is in the fold, drawing lots of attention. And more high-level talent to come. And with Jevon Thomas' decommitment, Kyle Anderson could be closer to a reality for the staff? Even if Steve Lavin couldn't fly east after losing his wallet in LA, after watching Ishmail Wainwright and Katin Reinhardt. Word is, he left his wallet in El Segundo (video link).

The Red Storm are armed with 2 more available scholarships for the 2012 class. A look at the Johnnies' recruiting targets, after the jump. 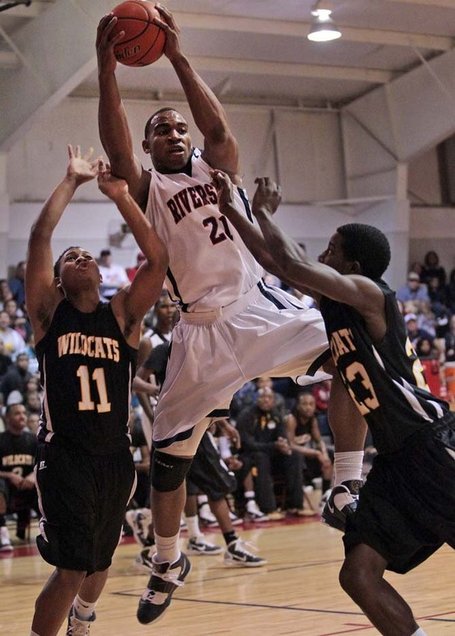 The big man from Louisiana fills a huge need in the post for the Red Storm, and is more than mobile enough to keep up with a fast-paced attack. His AAU coach makes comparisons to Karl Malone and Charles Barkley; what, no one that's not in the Hall of Fame? No Chuck Hayes or Anthony Glover?

What's the fit? Gathers will be muscle in the paint (thx to Will H for the phrase).

The Red Storm really covet the difference-making, high-IQ Kyle Anderson. The top-25 (or top-10 by some recruiting outlets) may not be the fastest player, but he makes plays. At 6'8" with high-end point guard abilities, he has been likened to Magic Johnson (maybe that's a little far/ easy) and Shawn Livingston. But he can also rebound, he can score, and his passing is top-notch. He's being chased by Seton Hall, Georgetown, UCLA (who may be out with the signing of Dominic Artis) and Florida, where Norm Roberts is the lead recruiter on Anderson.

Note that while earlier saying that he would announce his college choice on September 20th, Kyle Anderson now says he has no timetable, but before the season, per CBS Sports.

What's the fit? On a team with finishers, athletes, and length, Anderson would be the dynamo playmaker that would smooth out the rough edges and orchestrate the attack.

Our friends at Johnny Jungle dropped the scoop that flashy (sometimes over-flashy) Katin Reinhardt is interested in the Johnnies. Reinhardt, a former USC commit, is around 6'4" and plays at Mater Dei high in Santa Ana. He had committed to Kevin O'Neill's USC program, but felt uncomfortable and opened his recruitment up. Katin is friends with 2011 incoming center Norvel Pelle. Steve Lavin has extended an offer to the top-50 player.

What's the fit? Katin Reinhardt is a dynamic, flashy, and athletic player; but unless Nuri Lindsey leaves early, he will have to compete for playing time. But he can shoot - so he can see some run for the Johnnies.

A long, lanky, athletic forward/ wing measuring about 6'7" and 185 pounds out of Philadelphia, Amile Jefferson oozes talent. He's quick, aggressive, and known to be a smart player (and a good student). Tony Chiles and Steve Lavin had expressed interest in the forward in the past; Jefferson also knows Nurideen Lindsey well. Jefferson has been recruited by local schools Villanova and Temple, and the top-50 forward may want to stay close to home.

What's the fit? Jefferson seems to have similar skill sets to players like Jakarr Sampson, and isn't big enough to play deep in the paint; but a versatile player like him can be fit into the rotation.

Christopher Obekpa is a long, defensively minded forward from Nigeria who plays at Our Savior New American - where Jevon Thomas also plays. Obekpa is 6'8 and lanky, and can block shots very well. He can run up and down the court well.

What's the fit? The Red Storm could use another player in the paint who can rebound, alter shots, and run with the agile wings on the roster.

The "who is that?" recruit: Darrick Wood (G)

Darrick Wood isn't a widely known name, but he's had a very good summer. The 6'4", 175 pound guard is originally from Washington DC, but has played with Kyle Anderson and the NJ Playaz, and will attend Newark's NIA Prep in the fall. Wood is skinny and not strong at all, but ESPN's Dave Telep compares his scoring ability and size to another scrawny top-150 guard with a shooter's touch who wasn't everyone's top commodity a year and a half ago, Jeremy Lamb.

What's the fit? Every team loves points, if he can score on the Big East level. His length and scoring ability could fit nicely with the Red Storm roster, especially if he's given time to hone his abilities instead of being made the alpha dog scorer from day 1.

Kamari Murphy is a forward originally from Brooklyn. He played at Lincoln High School and was originally a 2011 commit, but he reclassified to 2012 and is at IMG Academy in Florida, where 2011 incoming guard Phil Greene played his last year of high school ball. Murphy is a little more enamored with his outside jump shot, which hasn't yet become a force. His strengths are in his speed, shot blocking, and athletic tools/ potential.

What's the fit? As above, the Red Storm can use more players who play the post and alter shots. Kamari Murphy is also versatile, and would be another New York player Lavin convinces to stay home. He seems to be off of the staff's main radar, but we will keep track of Murphy's progress.