We're spending the summer months looking at how the Big East competition will fill their personnel gaps from graduation, transfer, or players who left early for pro opportunities. Next up: the Marquette Golden Eagles. We're going from the back to the front of the league. See more Mind the Gap posts.

In short: Marquette has been treading water at "pretty good" for a few years now; can they make the leap into excellence? (photo of Vander Blue and others, by Getty Images/ Gregory Shamus)

(The players named are those leaving; with their percentage of contribution to the box score statistic for last year beneath their name, associated with the appropriate slice. Hopefully I captured Marquette's garish collection of uniform colors appropriately.) 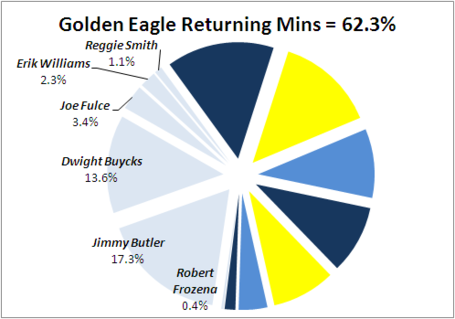 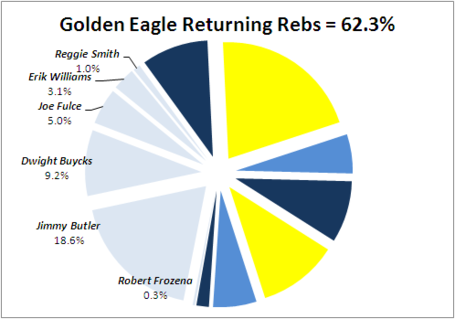 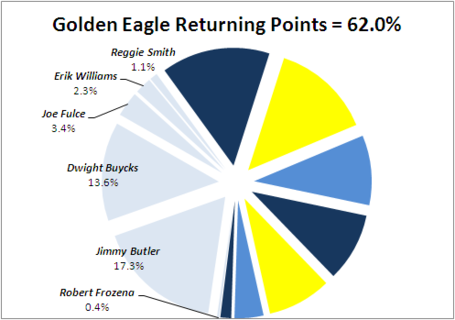 Marquette's main losses: What Marquette loses are players who handled their positions for much of the game in Jimmy Butler who played over 86% of available minutes and Dwight Buycks, who was on the floor over two-thirds of the game. Buycks had some turnover issues and shot 44% from inside the arc and 46.3% outside the arc in Big East regular season play. Another player might improve on what he didn't do well, but might struggle to match his accuracy from beyond the arc.

Butler, taken in the NBA draft with the 30th pick, is much harder to replace. He scored efficiently and didn't turn the ball over, drew fouls, and contributed all over the box score and defended with length.

The Golden Eagles also lose some players who were on the fringes of the rotation. The senior Joe Fulce was undersized, but physical. Erik Williams played the season with an injury, and chose to transfer closer to home. Reggie Smith chose to transfer far from his Chicago home, committing to the UNLV Rebels for more playing time.

The Golden Eagle returnees: Darius Johnson-Odom will be the star of next year's team, most likely. The 6'2" guard can get his shot off, taking 29.5% of the team's shots in Big East play. And he does it while making passes (assisting on 17.8% of the team's shots) and not turning the ball over (14.5% of his possessions end up in the other team's hands). 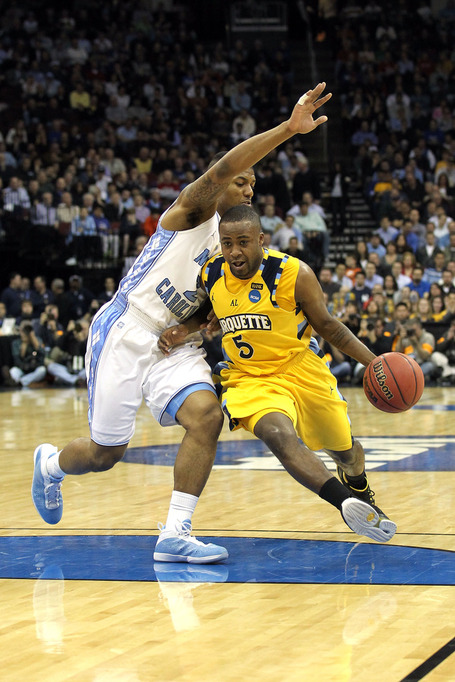 He'll be a scorer; but he needs help. In the backcourt, that help has to come from outside, or from the duo of Junior Cadougan (photo at right, by Getty Images/ Nick Laham) and Vander Blue. Cadougan struggled with his shot last year, shooting 15% from outside the arc; but he made some passing plays and put some points up against West Virginia and North Carolina. He and Vander Blue came to Marquette with some buzz... Cadougan has been better in fulfilling his promise. Blue looked lost at times and needs to flat out play better.

The folks at Cracked Sidewalks will tell you that Jae Crowder is great. He does a bit of everything well. But can he be spectacular at, say, rebounding? He's no Lazar Hayward; Crowder could use some consistency on the boards. Or maybe it's that the Golden Eagles sometimes don't stop the ball from going into the basket on many possessions. Still, Crowder does a lot of very good things on the basketball court.

Davante Gardner can help on the glass. When given time, he can score and hit the glass with the best. But fouling out in 10 minutes against Georgetown and picking up 6 fouls per 40 minutes overall probably doesn't help him earn time on the floor. At 6'8" and 290 pounds, maybe his conditioning needs improvement. Chris Otule has come along to be a solid player inside, blocking shots at a very good clip. I always think it's amazing that he can play on this level with the use of only one eye.

Marquette's possible gap fillers: The Vander Blue/ Cadougan improvement seems to be the most crucial for the Golden Eagles. Blue has size and athleticism to play on the wing, replacing some of what Butler provided. But that kind of steady wing play will likely be parceled out to a combination of players. Juan Anderson has been praised for his basketball IQ, and that will help him get some time in the rotation.

But Oregon transfer Jamil Wilson sat out last year and provides similar size to Butler, and possibly a similar skill set. Can a player step in and be that effective? Possibly. Wilson had a turnover per game in only 15 minutes per game in Pac-10 conference play back at Oregon, but he shot decently inside the arc. His playing time was limited, but he entered college as a top-50 player, so chances are he's a lot better than what he showed in Eugene. Marquette fans are very hopeful that he can meet his potential. And Anonymous Eagle tells us that he was great in practice last year. For what that's worth...

Derrick Wilson's aggressive and physical play will earn him minutes in the backcourt, since Blue hasn't shown much in the way of point guard skills, and Cadougan can't play every minute... nor would Buzz Williams and the Marquette staff want him to. Todd Mayo may see some time as a scorer as well.

The defense problem... it might just be the coaching staff's tendencies. It's been three years, and for a top-half Big East team, it's been consistently mediocre to bad. The G-Eagles score so well that it doesn't keep them out of the NCAA Tournament, but if they could combine that offensive efficiency/ intensity/ sharpshooting with a median defense, they would be mentioned among the nation's near-elite. Or maybe they'd be Vanderbilt, who are still looking for postseason success under Kevin Stallings.