Ingram: a reminder of naughtier days of the St. John's program

Share All sharing options for: Ingram: a reminder of naughtier days of the St. John's program

While I don't think the numbers of players from that group who never made the NBA (or didn't play much) is "shocking" (his word) at all, it is interesting to remember former Johnnie guard Elijah Ingram was on that list of (supposedly) the 24 best players in the United States.

Back in 2002, Ingram was supposed to be proof that Jarvis could reel in the big time players. Yes, there was Marcus Hatten, the junior college player who carried the team on his back. But local high school recruiting had fallen sallow, with rumors of Jarvis' arrogance making the rounds, talk that his staff didn't work hard enough, and general discord around the program. It didn't help that Jarvis' players kept appearing in the news for the wrong reasons - weed smoking, roughing up women, too-fancy vehicles... the Red Storm were struggling to remain relevant in the Big East.

And this was a time when Jay Wright was beginning to mark his territory in New York with Curtis Sumpter and Jason Fraser, and as coaches like Jim Calhoun also had a line on the best New York area talent. Below, a look at the knuckleheadism and flawed talent of the Johnnies in the early 2000's (aka the Naughty Aughts - since there is no consensus on what to call the last decade).

For the Red Storm, the decade was filled with naughtiness, a drift from good basketball, numerous criminal incidents - and Ingram was at the heart of the most publicized incident, the one that set back the Red Storm program for years.

Ingram came in with so much publicity. But I remember seeing him play before college - I believe it was that All-American game. He was quick, he was lithe for a fairly skinny guy, but that ridiculous shot of his was worrisome. He shot the ball from his ear in a more extreme manner than I had ever seen. I always wondered how he could shoot without his hands somewhere in front of his body and know everything was aiming at the basket? For a player who looked like he wasn't that interested in the passing part of being a point guard, how would he do in college? 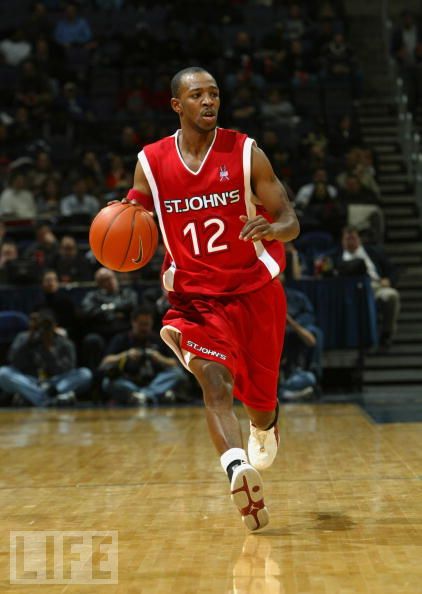 Ingram (photo at left by Doug Pensinger/Getty Images) proved to be an errant shooter, with effective field goal percentages in the low 40s (read this for a primer, if "effective field goal percentage" gives you the quizzical look). In Big East play, he struggled to convert over 30% of his interior shots, and shot better from the outside (31.3% in 2002-03, and 34.5% in 03-04). I will never forget watching St. John's play at the Carrier Dome against Syracuse; there was little effective ball movement against the zone, and Ingram took it upon himself to carry the team, taking 20 shots from outside of the arc.

He made 2 of those shots, hitting 2-20 on treys and 3-22 overall in a 66-60 loss. Hatten wasn't great from the outside either, going 2 for 11 but scoring 22 points, mostly inside the arc. Some fellow named Carmelo Anthony led the Orange with 21 points and 13 rebounds.

So, his shooting was terrible, you say. His job was to direct the Johnnies' attack, you may say.

And of course, no mention of Ingram is complete without mentioning his arrest in Pittsburgh on rape charges, which were tossed because he had the presence of mind to record the accuser's demands for money which they had supposedly agreed to pay her.

Which is to say, they were not paying her for services rendered. So there's breaking curfew; some kind of group sex action; and then welshing, possibly, on the payment. That's naughty, even for the

Ingram was the poster child for a dark time in the program's history. No, he was a major figure; Grady Reynolds' assault on a fellow student was certainly worse, though he delivered rebounding and post defense to Red Storm teams that could only win with defense.

The response to those publicly embarrassing years was strong; the president even made a remark about suspending the program. Instead, St. John's brought in a squeaky clean coach in Norm Roberts who wanted to be at St. John's. And, with his history of recruiting top New York players (even if he didn't always land them for Bill Self at Illinois and Kansas), he was interested in cultivating relationships with the city's best players while doing things the "right way," which did not bring enough wins to the program. But that's what an overriding urge to change the "culture" of the program to the exclusion of everything else program will do.

The low of the period extends beyond the team, certainly; and the mid-aughts (2000s) also saw a number of other scandals and personnel issues. The Red Storm were just one story of a program buckling under the weight of mismanagement and knuckleheadism.

And the program's culture DID change; the players who have come to St. John's and stayed have been stellar citizens, good scholars, and solid athletes. But those intervening years also saw a coach who couldn't get his team to play consistent offense, couldn't bring in the players to compete at a high level in the Big East. The inability to win makes a program a hard sell; very few (top) players wanted to be the ones to turn the program around and make New York wear the Red of the Storm or make the Garden rumble with excitement.

Ingram played two more years at New Mexico State, and has bounced around the world playing hoops, never quite fulfilling that McDonald's All American honor. But sometimes, some players make the McD AA roster on their name and fame, not always the game. It happens. The game is not always the best 24 high school graduating ballers in the country. Still, the excitement about getting Ingram's name on the dotted line was quickly flushed by the slide into the gutter of college hoops.

Ingram is slated to play in Finland next year; I found this link which seems to say that Ingram will play for a Finnish team named Salon Vilppaan. Good luck to him while he makes his way through the world of hoops.