Share All sharing options for: Mind the Gap: Louisville basketball

We're spending part of the summer taking a look at what the Big East competition brings back to Big East play - or how the fill their personnel gaps from graduation, transfer, or players who left early for pro opportunities. Next up: the Louisville Cardinals. See more Mind the Gap posts, from our look at returning minutes and whether returning minutes even matter.

In short: Louisville returns much of their roster from last year. But are the freshmen enough to both fill the gaps and elevate the Cardinals beyond first-round knockout status? 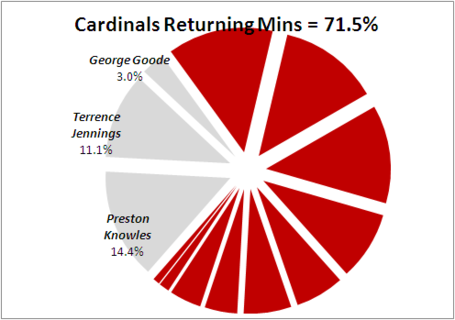 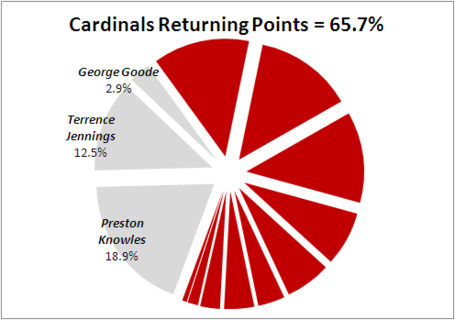 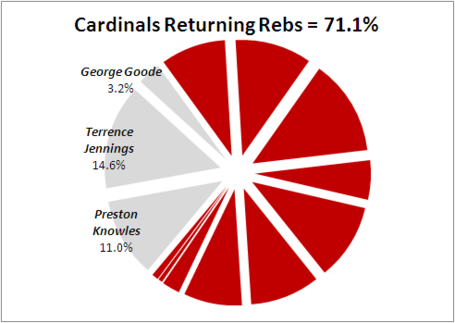 Louisville's main losses: The major loss is guard Preston Knowles. He was a leader, a good passer a solid defender, especially when factoring in steals. He made a number of nice players. But he was also exclusively an outside scorer, and fairly inefficient inside the three-point line. He shot 32% in Big East regular-season play inside, but chose his shots wisely. Knowles is part of the reason that the Cardinals led the Big East in three point attempts as a percentage of all field goals taken.

To say it more simply: they depended heavily on the outside shot. And it mostly worked; it was the lack of ending the other teams' possessions that got them in the end, among other things.

The other loss is Terrence Jennings, who blocked an excellent percentage of shots and scored fairly efficiently. His game wasn't NBA worthy - bad defensive rebounding numbers, not a big enough part of his offense, not enough defensive skill to offset those factors. George Goode also leaves the program. The big man was a back up for the Cardinals.

On the Cardinals' returnees: Boy, they have an awful lot of players on their roster, don't they? Chris Smith, Kyle Kuric, and Elisha Justice will be walk-ons, making room for an excellent five-man recruiting class; this is one of the most talented teams in the Big East Conference.

The triggerman is Peyton Siva, the sometimes-wild guard and former McDonald's All American. Like Dante Taylor of Pittsburgh, one expects such highly ranked players to be able to shore up their game and be impact players in college; Siva has had some very good moments, like slicing up the Red Storm last winter with 10 points, 10 assists, and 7 steals; but he ended the season on a dank note with 3 points, 3 assists, and 5 turnovers in 25 minutes against Morehead State in the NCAA Tournament. Insert "stock market joke" or "rollercoaster crack" or "Charlie Sheen behavior comment"; Peyton Siva, as far as consistency goes, was volatile.

Kyle Kuric takes the shots he can make (often in the corner) and he makes them. He is a smart, turnover-free player with some hops and defensive skill, but he doesn't take up much of the offense. Chris Smith was a solid shooter for the Cardinals. Mike Marra was not. He looked lost in the wilderness, and his misses were at times not close. Russ Smith watched from the bench, but may get some more playing time at the wing/ shooting guard spots

Up front, Gorgui Dieng doesn't get enough credit. He held down the paint as a freshman, logging double-digit rebounds twice, but lost time with an injury as the year went on. He could stand to foul a little less, but his energy and enthusiasm made him an excellent freshman in the system. Stephan Van Treese's time was sporadic. Rakeem Buckles battled injury, tore his ACL, and might be out for the bulk of this season. Jared Swopshire missed last season with injury.

Louisville's possible gap fillers: So far, the buzz from Rick Pitino's squad is about Chane Behanan. The beast of a power forward looks on track to start at the beginning of the season, even though Pitino generally isn't keen on starting young'ins. If he can rebound on the defensive end, that would be a big help; the Cardinals were fourteenth in defensive rebounding on the Big East last year. Granted, they forced teams to miss a LOT of shots, so there wasn't much to worry about, but it is a concern when Louisville's not able to blow the doors over the opposing side. How will he do early? Will Zach Price get time as well? Will Gorgui Dieng improve his defensive rebounding? Will Rakeem Buckles actually make it back this season?

Will Jared Swopshire somehow be the best defensive rebounder (as he was in 2009-10, by the tempo-neutral numbers)?

As for the outside shooting, Preston Knowles took 261 of Louisville's 418 three-point attempts (62% of the Cardinals' total). That 261 is more than the all of the outside shots taken by St. John's (218) and Pittsburgh (246), though both teams played a far slower pace and took fewer shots, in general. But without Preston, everything is a little different now.

Maybe that's a good thing. The Cardinals, whose offense featured the highest percentage of threes taken in the Big East, also shot the lowest percentage of free throw attempts per field goal - they didn't draw fouls.

Shooting perimeter shots only and never going to the line tend to be correlated.

A slashing guard like Chicago's Wayne Blackshear makes for a different look for the Cardinals. A better look? Too early to tell, and Blackshear has a shoulder injury and has been out of action. Still, getting to the line does open up scoring options for the team when the shots aren't falling, so if Blackshear can attack from the wing, he will be important. Besides Siva, few players on the roster are reliable at drawing fouls; Blackshear - with some help from Russ Smith, maybe - could provide a foul-drawing, slashing element that the Louisville team lacks.

The question of the backup point guard has few answers. Perhaps Peyton Siva can log more minutes. Perhaps Chris Smith can handle the point for stretches. Maybe Kevin Ware. But the speed/ turnover-forcing nature of the Louisville team may lessen the need for a true ballhandling facilitator. If passing and ball security is everyone's job, they can all fill that gap.

I expect a solid run from Louisville this year.