We're spending part of the month taking a look at what the Big East competition brings back to Big East play - or how the fill their personnel gaps from graduation, transfer, or players who left early for pro opportunities. Next up: the Pittsburgh Panthers. We're starting from the alphabetical caboose of the league. See more Mind the Gap posts.

In short: Pittsburgh is great at replenishing their roster from within and will be good. But do they have the pieces to be great? 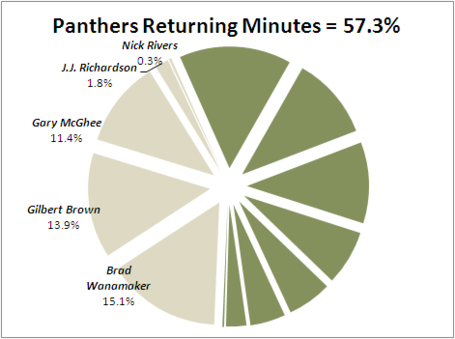 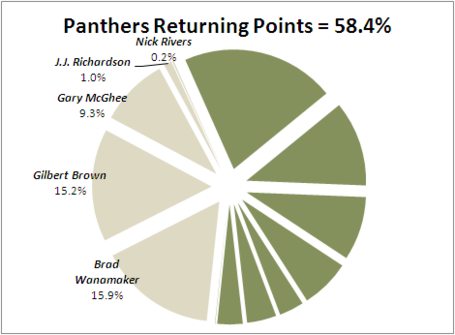 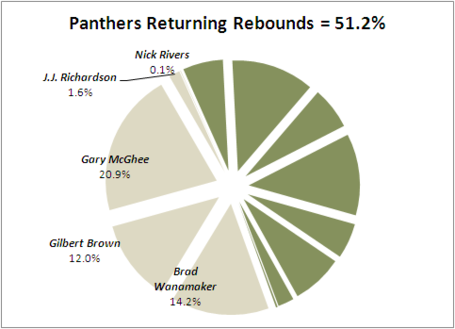 Pittsburgh's main losses: Brad Wanamaker was an incredible all-around player - he scored efficiently, passed well, rebounded well for his position, stole the ball, defended solidly, and got to the free throw line. Who on the roster can make plays like he can? Likely no one. Meanwhile, Gary McGhee was a large space-consuming rebounding monster inside who played high-level Pitt defense. Gilbert Brown, much like Brad Wanamaker, was an excellent athlete and could get his shots off from outside or on the drive.

Who are the returning creators on the wing? They likely spent last year on the bench...

The Panther returnees: Ashton Gibbs will be the centerpiece of the Panthers team. After taking a peek at his NBA draft stock, Gibbs hopes to spend some time running the show from the point guard position... despite the fact that he is mostly a perimeter catch-and-shoot shooter. Is he quick or crafty enough to make plays from the 1-guard spot? Possibly. He won't be quick enough for the NBA, most likely, but he can enable the Panthers to put better outside shooting lineups on the floor...

...If J.J. Moore shoots better from the perimeter. Pitt was second in Big East play in three-point percentage, but fifteenth in percentage of shots taken from outside of the arc. Moore has a real chance to be a star; and with his athleticism, could be the missing piece that makes the Panthers great (and gets them past the second round of the NCAA Tournament). Cameron Wright could factor into the guard/ wing spots as well, as could Durand Johnson; though Johnson seems most likely to get the Pitt Freshman Treatment - a lot of training, not a lot of minutes on the floor.

Dante Taylor and Talib Zanna, by the numbers, have been solid in limited time. But the mistakes they have made on the court, apparently, have kept them on the bench for Jamie Dixon's club. Where they could play, Dixon seems to have more faith in the short but burly Nasir Robinson, who will be a senior this fall.

Travon Woodall is the pure point guard on the roster; he's been okay as a passer, but mediocre as a scorer, and still could use to eat some more bowls of pasta. Isaiah Epps is supposed to be a good passer, and could see some time here or even supplant the Brooklyn-bred Woodall.

Pittsburgh's possible gap fillers: Most of the filling will come from players who have already been enrolled at Pitt for a year - that's just how Jamie Dixon does it. But Khem Birch's explosive athleticism inside will find its way onto the court (obviously, with the player).

The replacement of Gary McGhee will be a team effort. There are more than enough capable bodies to replace him, but both Taylor and Zanna will have to up their game on the defensive glass and in being foul free. Taylor committed 6 fouls per 40 minutes; Zanna committed 5.4 fouls per 40. They wouldn't play 40 minutes each, but those numbers get a player a nice seat on the bench with the towels. Birch and Gilbert should be solid for stretches in the paint as well.

While it's not their style, Pitt could use some explosiveness on the roster. Or some shooting. The young players who spent much of the year on the bench - Moore, Epps, and Wright - and the incoming guards Johnson and Johnson could provide a spark to the Panthers program that has experienced solid success in the past decade, but hasn't gotten to the Final Four.