Where will Kyle Anderson, the difference maker, play his college ball?

The long, top-10 ranked forward who passes and handles like an elite point guard, is the subject of five fan bases' breathless attention. When he picks a place to visit, murmurs start. When he compliments a school/ program, murmurs breaks into argument.

What schools will he visit before his September 20th decision on a college?

Why is Kyle Anderson so important to a Red Storm program that just brought in the third best recruiting class according to most of the major recruiting sites?

Why is Anderson so important to the Red Storm? 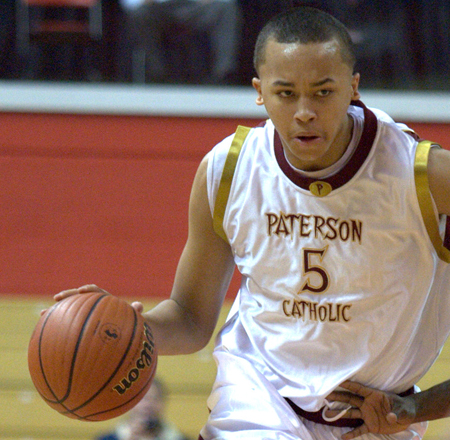 The Red Storm have a number of lengthy defenders and athletic finishers. Still, the staff sees where the squad needs specialists to go along with the cadre of 6'3" - 6'8" interchangeable wings. And they've pursued targets who fit the team's needs for the next recruiting class.

But with that last scholarship, a talent like the 6'8" Anderson could vault the Johnnies into the upper levels of college basketball. He can run things like few others can.

For example, here's how Anderson dominated a summer league tournament featuring the best players from four of the five boroughs:

Anderson owned the second half, scoring 18 points and controlling the game’s tempo as he ran the point from the small forward position, turning defensive rebounds into fast break opportunities. In one two-minute span, he sank a 3-pointer, scored inside and set up two teammates for easy layups, kick-starting a 14-0 run.

Or for the more statistically minded, here is a breakdown of Kyle Anderson's game at Nike Peach Jam from a month ago where he tore [stuff] up.

With the scoring talent already on the Red Storm roster, a facilitator would step everyone's game up, giving them the ball in the right positions to make scoring plays. The difference can be as stark as North Carolina's development with Kendall Marshall at point guard rather than Larry Drew. Decent but flawed players can become unstoppable. A good team with second year upside can be the trendy pick to make a deep NCAA Tournament run. So many fanbases are watching the recruiting carefully.

Here is his unofficial visit schedule released to SNY.tv by his father. It is subject to change.

One would like to see St. John's get the final pitch in; instead, Billy Donovan's Florida staff will get the last crack at Anderson. Former St. John's coach Norm Roberts has been the point man on that recruitment, and with the last trip, a weekend in Florida with a home football game and the last impression on the star guard, Roberts could pull Anderson for the Gators, who have also enjoyed more recent basketball success than the other teams on Anderson's list.

Stitching together the 2012 recruiting class hasn't been easy roads and roses. Jevon Thomas wasn't feeling the love and decommitted; he's got looks from Seton Hall and Penn State now. Katin Reinhardt got some looks from the Red Storm, but chose UNLV.

Kyle Anderson is a different level of player. True, St. John's chased after top-10 player Lance Stephenson and failed; but Stephenson's recruitment was filled with awkward steps, Lance's mercurial "process", and questions as to whether he would qualify. Programs washed their hands of him, which is how a top target ends up committing to Mick Cronin's Cincinnati team. Kyle Anderson and his father have the recruiting game under control; they know what they want, and they want to make a decision.