We're spending part of the month taking a look at what the Big East competition brings back to Big East play - or how the fill their personnel gaps from graduation, transfer, or players who left early for pro opportunities. Next up: the Georgetown Hoyas. We're near the top of the league, going from West Virginia to Cincinnati. See more Mind the Gap posts.

Key gaps in the Hoyas' roster: Outside shooting, guard play

In short: Attrition has weakened the Hoyas' roster over the years; the new version seems to be weak on shooting but heavy on size. Can Georgetown's young and inexperienced roster carry them back to the NCAA Tournament? 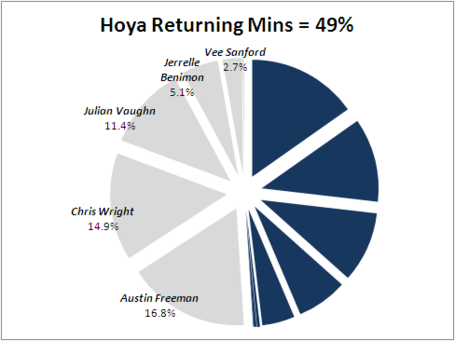 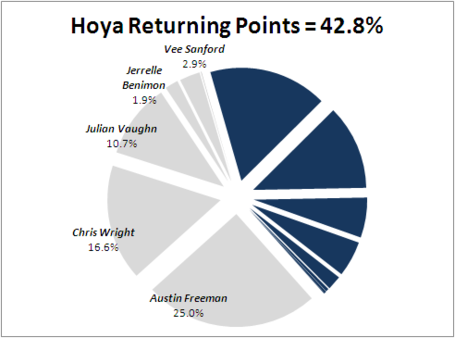 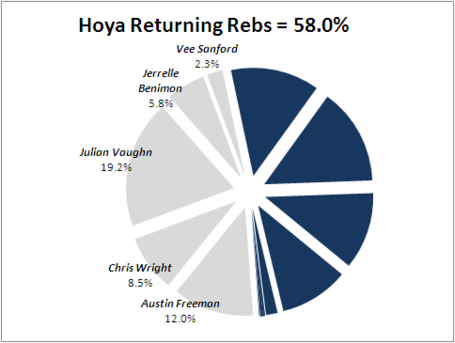 Georgetown's main losses: Austin Freeman's ability to shoot, and Chris Wright's ability to score will be dearly missed. The Hoyas received just under 32% of their scoring from that pair. Freeman himself took 29.9% of the shots when he was on the floor, and that's a lot. Considering his efficiency - and that he maintained highly efficient scoring all four years as a Hoya - that's a huge loss for the team. And considering that he did all that without turning the ball over? He'll be impossible to replace.

Chris Wright, on the other hand, used a lot of possessions... and quite a few ended in turnovers or "bad idea" shots. He was good, but he could have been better - especially inside the arc.

Where he does leave a hole (not-pictured in pies) is in assists. The Princeton system doesn't need one player to be the high-end assist man; all players are asked to be deft passers. But considering the meager assist rates of everyone not named Wright (assists on 32.1% of shots when on the floor), Freeman (16.4%), or the returning Henry Sims (16.2%), there's a lot of room for some players to step up their passing game.

Julian Vaughn will be missed in the paint. He could hold his own against the biggest of the Big East, and he could grab a healthy number of boards. Down, low, at least, there are a number of plausible replacements in Sims, Hollis Thompson, Nate Lubick, and the newcomers.

The Hoya returnees: There's a lot of meat coming back to campus. Hollis Thompson rebounds well from the wing, but has game enough to stretch a defense; and Henry Sims and Nate Lubick add size and passing (the big men have to be deft passers, after all!). Moses Ayegba (who once carried the last name "Abraham") is not part of the meaty Hoya center - he tore his ACL in a summer league game.

The backcourt is more of a question mark. Jason Clark is the mainstay; he's efficient inside the arc and athletic enough to finish a high percentage of his drives. He's also athletic enough to bother opponents with his long hands. But who goes next to him? Markel Starks is a guard who saw little time on the court last year, and will be expected to... do something more. Not sure yet, based on his performance last year, what that something more actually is. Aaron Bowen may see more time - can he be a difference maker?

Along with the losses in the backcourt, the Hoyas were 11th in the Big East in three-point shooting last year in league play, and lost two big-time outside shooters.The Hoyas were also 15th in offensive turnover percentage in Big East play. They also didn't force turnovers (which is normal for the Hoyas) or rebound opponents' misses particularly well.

There's a lot of room for improvement.

Georgetown's possible gap fillers: In truth, this roster may have to work harder, pass better, and bang harder to maintain their status in the middle of the Big East.

In that vein, Jabril Trawick has been talked up a lot this offseason for his defense and energy. Defense and energy don't always get the ball in the hole, not as much as "skills" do. Otto Porter has guard-like talents in a forward body, and has a chance to be Freshman of the Year in the Big East - if only because the Hoyas will have to put him on the floor if he can be a consistent scorer/ creator/ finisher. Greg Whittington also has some perimeter abilities, and could see minutes for the Hoyas.

Mikael Hopkins and Tyler Adams should provide some more size and strength. But will it be enough? The Hoyas just might fall to a three-lettered tournament, instead of the four-letter tourney they've gotten used to.