How will the Big East competition fill their personnel gaps from graduation, transfer, or players who left early for pro opportunities?

This look is at the DePaul Blue Demons. See more Mind the Gap posts.

In short: The Blue Demons are slowly digging up from the Big East's bottom four. With added athleticism, expect more than a single Big East conference win this year. 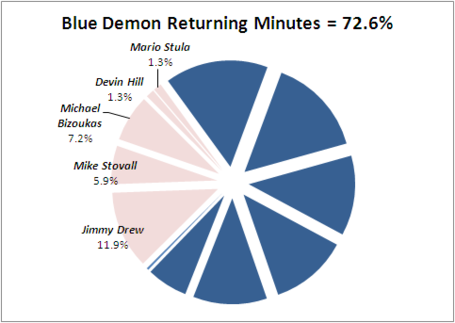 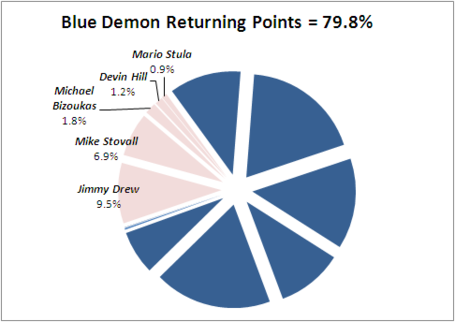 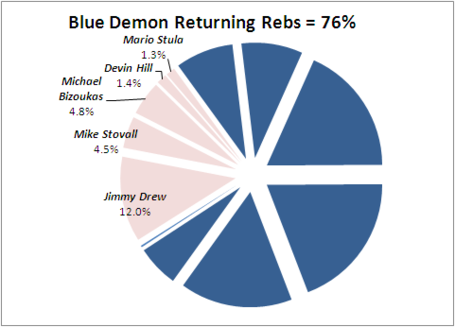 DePaul's main losses: Can you call them "losses" if almost every player removed from the roster simply filled the requirement to have five players on the court? Everyone knows DePaul was bad, and the removed players were a big part of the reason why. This isn't hyperbole; one would be hard pressed to find players less useful at their position than Mike Bizoukas and Mike Stovall. Stovall used possessions like a star (26.5% of possessions) but was offensively woeful (83.4 offensive rating), while not rebounding, not drawing fouls - at least he could make a pass.

Bizoukas barely shot. When he did, he missed - shooting 33% inside the arc and 25% outside of it. He fouled 4.7 times per 40 minutes, he was too small to rebound, and he struggled to stay in front of his man. Devin Hill never understood that he is 6'8"; he's Loyola-Chicago's bench player now. Mario Stula was exclusively an outside shooter who could not shoot.

The roster "losses" are gains, with the exception of Jimmy Drew, who wasn't great or quick, but could nail shots and had the courtesy not to turn the ball over.

The Blue Demon returnees: The light at the end of the bleak Blue Demon tunnel comes from Brandon Young and Cleveland Melvin. Melvin was a star on the Blue Demons. After 7 games, he became the steadiest player on the Demons, an agile, multi-faceted big man who could run in Oliver Purnell's scheme. He took over 30% of the team's shots while on the court and turned the ball over on 12.6% of his possessions, which is remarkable. AND he maintained his dominance until an injury ended his season.

Meanwhile, Brandon Young was a smooth lead guard for the Blue Demons as a freshman. He averaged 3.6 assists per game, or assisted on 26% of his team's shots, which is solid. Young has good size and room for improvement; in Big East play, his outside shooting percentage dropped to 27.6% and his inside scoring to 44.7%.

Jeremiah Kelly's numbers don't pop out, except in context of the rest of the team. He's DePaul's most reliable outside shooter, and can play the point for stretches (though he's not a playmaker/ slasher/ creator type). Moses Morgan would like to be the team's most reliable outside shooter, and his shot started falling more consistently in Big East play.

Tony Freeland also returns, willing to slash and bang, but without a strong ability to finish inside the arc and with no perimeter game. Krys Faber mans the center position by dint of his size; he's capable but not a strong fit for the speedy Demons.

DePaul's possible gap fillers: DePaul has a lot of places for newcomers to make an impact; being the worst team in the league also means that no players' job should be safe. Even with the loss of Shane Larkin to his spurious mystery "injury", the recruiting class is loaded with athleticism from top to bottom.

Charles McKinney can score from the wing and will see time early. But Jamie Crockett and Macari Brooks are also excellent athletes. Do they have the skills for the Big East? If not - or if not immediately - Oliver Purnell's running system doesn't need them to. He just needs disruption and athleticism.

Up front, Donnavan Kirk (eligible in December) and Montray Clemons have both been described similarly to Cleveland Melvin - tall, athletic, able to fit in Purnell's system. This is great... except someone has to rebound the defensive end. The Blue Demons were absolutely horrible at ending opponents' possessions - worst in the Big East and one of the worst in the country. More big men are great, but some of them have to body up and keep the other team off of the glass.

The Blue Demons might not make it out of the basement (personally, I think they will). But they will be much closer to being a real, respectable Big East team. Considering some of the competition, that means the Demons could finish as high as 13th.