Graduated Red Storm forward Justin Burrell has signed a contract with a Japanese League expansion team, the Yokohama B-Corsairs, for the coming season.  Not selected in the draft, Burrell was open to international opportunities and NBA training camp invitations.

With the NBA still mired in lockout status, Burrell becomes the third Red Storm player from the 2011 team to sign a professional contract, joining Dwight Hardy in Italy and Paris Horne in Germany. More, with quotes, below the fold.

Justin Burrell, the Big East's Sixth Man of the Year, provided a physical presence for the Red Storm all year. At 6'9 and 244 pounds, he should provide a burst of powerful athleticism to the new basketball team. From Steve Lavin, courtesy of Red Storm Sports:

"Justin's dominating physical style of play in the basket area at both ends of the court was key to our success this past season. He has been a great ambassador of St. John's basketball on our campus and in the community. He will have a terrific experience overseas. Justin has helped us greatly in recruiting future Johnnies, and the St. John's family is pleased that he has received this well-deserved opportunity to play professional basketball."

The Basketball Japan (BJ) League, sponsored by Spaulding, is one of two leagues in Japan. Per Wikipedia, it's the higher of the two leagues, despite having started in 2005. The league has a number of Americans participating, including Jeremy Tyler, the high schooler who left after his junior year to play professionally. He went to Israel and moved on to Japan to play under former Fordham and NBA coach Bob Hill.

Burrell's future coach Reggie Geary played for Lute Olson's Arizona Wildcats in the 90's. He also played for the San Antonio Spurs and the Cleveland Cavaliers before logging some time overseas. His pro career ended in 2004; since, he's been a head coach in the developmental league, an assistant at Arizona and Southern Methodist, and now, the head coach of a brand new club featuring these tough guys. 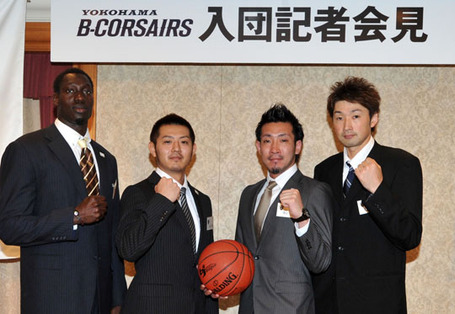 And from Red Storm sports again:

Yokohama, one of four expansion franchises in the B.J. League, Japan's second division, is located in the Kanagawa Prefecture on Tokyo Bay. One of four Americans who will play for the B-Corsairs, Burrell will live in downtown Yokohama and will be coached by American Reggie Geary, who starred at Arizona before a two-year stint in the NBA, playing for Cleveland and San Antonio. Burrell and the B-Corsairs will begin their season on Oct. 8 and play through March or April, depending on a postseason run.