We are sad to hear that incoming freshman Eric Katenda has been permanently blinded in his left eye in a pickup game. Notre Dame will cover the cost of his education once he is eligible. Good luck to him.

We're spending part of the month taking a look at what the Big East competition brings back to Big East play - or how the fill their personnel gaps from graduation, transfer, or players who left early for pro opportunities. Next up: the Notre Dame Irish. We're in the middle of the league, going from West Virginia to Cincinnati. See more Mind the Gap posts.

Key gaps in the Irish roster: Experience, rebounding, inside scoring

In short: Notre Dame's short rotations make the Irish's coming season look like a rebuilding year; but the next wave of the Irish attack has been biding their time on the bench. Can they maintain Notre Dame's recent basketball success? 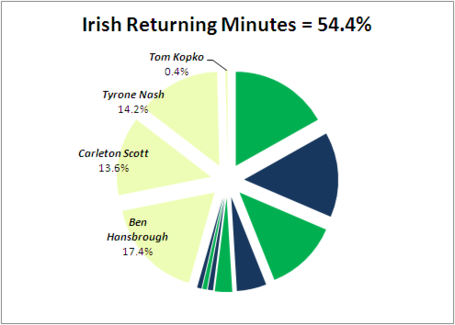 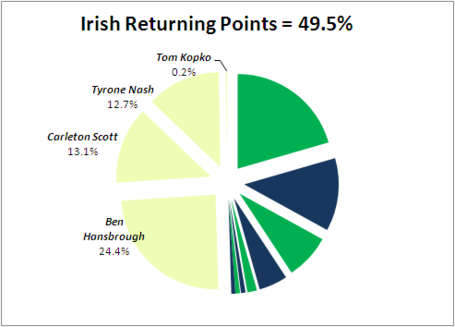 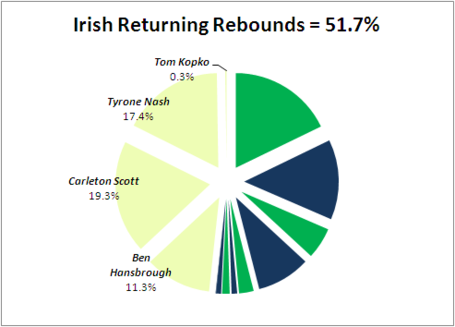 Notre Dame's main losses: Ben Hansbrough was excellent at creating his shot off of offensive activity - a capable dribble, working around screens, never stopping - and that's an energy and skill that's not easily replicated.

Meanwhile, the interior duo of Tyrone Nash and Carleton Scott will also be hard to replace.Other returning starters - Scott Martin and Tim Abromaitis - are certainly tall enough to play inside, but that's not where their strengths lie. Someone will have to emerge from the shadows to give the Irish a scoring punch inside and grab rebounds. Scott was also the closest thing the Fighting Irish had to an intimidator inside; when Scott was out, an already porous defense struggled at times, and the offense laid a pair of clunkers against St. John's and Marquette.

The Irish returnees: First, the ones who got time last year: Tim Abromaitis is an excellent outside shooter. But for about half of last season, his outside shot just wasn't falling. Thankfully, it was the first half of the season. Scott Martin saw a good amount of time, rebounded fairly well, but on a team whose style is predicated on ball movement and crisp shooting, he turned the ball over a bit and shot poorly in Big East play.

And then, there's the everybody else. Joey Brooks has been on the roster for two years; his foul rates are a little high (over 4.1 per 40 over the Big East season). He doesn't shoot often and turns the ball over a lot; there's a reason he hasn't gotten a lot of time despite his athleticism. Jerian Grant redshirted last year; he has the size and energy to supplant Brooks in the rotation. Alex Dragicevich has a handle and a shot; the Notre Dame coaching staff slipped him in to a number of games to get his basketball feet wet instead of redshirting him; they must have liked what he could provide in practice. Expect to see more of Drag-A.

Jack Cooley should finally break out - or off of the bench. He also has a bit of a foul problem, but when he playes he has put up some decent numbers, blocking shots, rebounding the offensive end well. Can he keep his energy level high for 20-30 minutes per night? If not, Tom Knight and Mike Broghammer could see time. Both have size, but haven't shown much, even against the weaker opponents.

Notre Dame's possible gap fillers: The gaps will be filled by the players who sat and watched last year. It's hard to imagine that a coach so averse to playing younger players (if they are not both needed and spectacular) will give a large role to Connaughton or Katenda unless the big men are unremittingly horrible and/ or the wings can't make plays.

The last time Notre Dame won less than 20 games was the 2005-06 season. The last time they were below .500 in conference was the 2008-09 season. Last year's team, much like the others, paid only lip-service to defense and found ways of constantly putting pressure on opposing defenses with their versatility.

The Fighting Irish may lose a lot, but doubt their ability to bounce back from their personnel losses at your own risk.