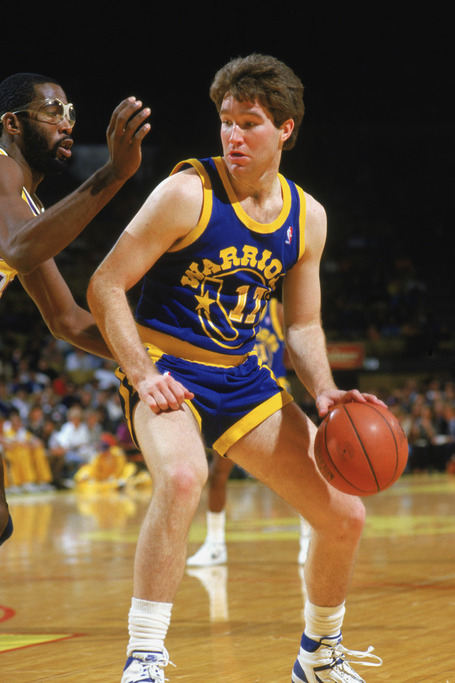 1 - St. John's Redmen great Chris Mullin and his old coach, the great Lou Carnesecca, speak about Mullin's legend and legacy in anticipation for his induction into the Basketball Hall of Fame this Friday. Coach Carnesecca will be Mullin's presenter.

While you're at it, read the interview the Rumble did with Mullin, the St. John's and NBA great, this past February.

2 - St. John's will play against St. Mary's College of Maryland for their exhibition game on November 3rd. St. Mary's is a small (2,000 person) public liberal arts college in Maryland that plays in Division III; but their head coach Chris Harney was noted as one of the top 25 non-Division I coaches in the country by College Insider.

And the CI list looks solid - the coaches for Williams and Amherst are on there, along with Wash U in St. Louis, which has had a very good men's hoops program. So while they are Division III, the competition shouldn't completely stink - even if the young Johnnies blow them out.

More St. John's news and notes below the fold.

Also impressing once again was Burrell. The St. John's forward excited fans with his freakish athleticism during the Malone Mulhall Benefit Game earlier last weekend, and he certainly did not disappoint the Nike Pro City crowd either. He finished with 27 points and 10 rebounds of his own.

Also, Cameron Edison has used up his eligibility, and will not be a walk-on this year.

5 - Recruit Ricardo Gathers led all scorers with 28 points and added 8 rebounds in a loss to the USA 2012 squad at adidas Nations on Saturday. In their second game, the Latin America team lost again, but the Nations website adds:

Ricardo Gathers of Latin America started the game with a powerful dunk followed by a deadly 3 pointer.

In his first game with the Latin America team, Gathers had 10 points, 5 rebounds, and 2 assists. I'd give more information, but the "box scores" at adidas Nations are fairly uninformative.

6 - Luke Winn digs into the decommitments of Division-I players from their high schools and colleges - Momo Jones and Dwayne Polee II both figure prominently in the narrative. I wrote on the many schools St. John's 7 scholarship freshmen (assuming they all qualify) have attended in their high school careers. Like I say there - that's no cause for alarm, just an interesting set of factiods.

7 - For those with ESPN Insider access, Jay Bilas waxes a bit on the Villa 6/ Coaching U Live coaching clinic, which included Mike Dunlap. Bilas says of Dunlap, "Mike Dunlap is an extraordinary teacher. He has been around the game for a long time, and he has studied it beyond most other coaches. But most impressive was his humility and willingness to share and hunger to learn."

8 - Celine Dion makes Ron Artest cry. And her songs make his nipples freeze.  And Artest was backstage at her show... if you can't see, this writer is shaking his head at Metta World Peace.

9 - a recruiting note: Rivals takes a look at the class of 2014 prospects who impressed this summer, and St. John's target (And Dwight Hardy's friend) Chris McCullough is on that list, of course.

Around the league/ NCAA

CBS Sports provides their Big East Offseason Report, including the big non-league matchups for each team and assistant coaches who have moved on to other programs.

Jeff Robinson and Jeremy Hazell are looking at offers to play basketball in Europe.

DePaul lost 2011 incoming recruit Shane Larkin, who was poised to be a major part of DePaul's fight from the bottom this season. Larkin is staying in Orlando because of a " medical condition that requires Larkin to be closer to his Orlando home " which sounds an awful lot like cold feet or homesickness. Perhaps there is a medical issue, but I would find this far more believable if it was a parents' issue forcing him to stay home. If he can still play... I don't see why he doesn't just take a year off.

2012 recruit - and possible lottery pick in the 2012 or 2013 draft - Andre Drummond will "be making a decision on his future on August 10th". Why is this important?  For all we know, the impact center Drummond - who should be a 2012 recruit but can go to college this fall, as he's finished up his high school requirements - may go to Connecticut this year. More from Ballin is a Habit.