How will the Big East competition fill their personnel gaps from graduation, transfer, or players who left early for pro opportunities?

This look is at the Connecticut Huskies. See more Mind the Gap posts.

In short: An impressive confluence of events lead us to believe that Jim Calhoun has a deal with the devil. [REDACTED] With a trio of talented newcomers, Connecticut can be better than last year - they will have a bench. 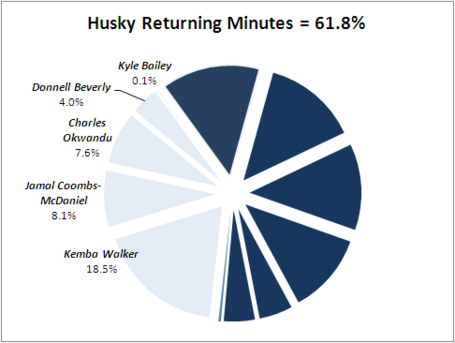 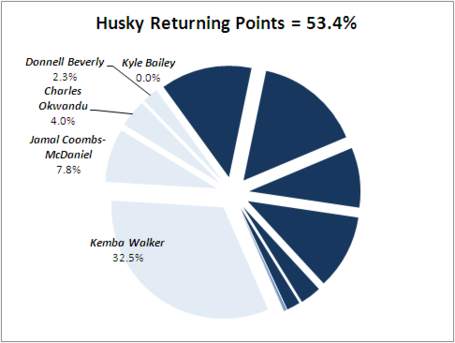 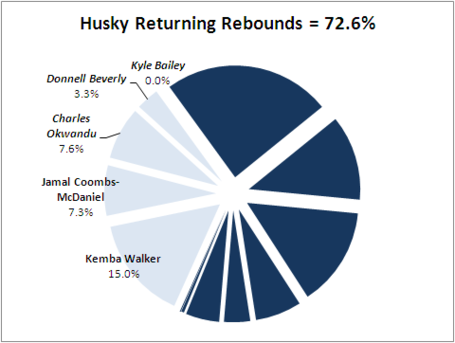 Connecticut's main losses: The main loss here, of course, is the loss of the Kemba. Kemba Walker carried this young team, nappies and pacifiers in hand, through a decent non-conference slate (that looked more fearsome coming in). Then the Kemba took a bit of a statistical nap for a chunk of the Big East season. Why not, the man was tired.

Then he woke up his charges and like a fiercely protective Mama Husky, led the youthful U Conn through a seriously improbable run for a 9-9 Big East team, culminating in cutting strings on the net with confetti falling all around, and Jim Nantz just wanting all the squeaking and shouting and clanging of missed shots to be over so he can return to the soft tones and historic greens of golf.

It was one of the worst national championship games of recent memory. U Conn beat a lot of good teams to get there, but one has to wonder if it wasn't just the luck of a bad year. A freshman-laden team that was mired in the middle of their conference winning a championship?

But the Kemba led the Huskies, and his loss is that big lighter-shaded chunk of the returning points pie.

The other players had bit parts, the largest being Charles Okwandu's occasionally sizable insertion into games. But he only blocked shots.

Coombs-McDaniel, now transferred, only took up time on the floor.

Kemba took 32.9% of the team's shots, scored like a maniac (116.7 offensive rating, 129th in the country) and played 92% of his team's minutes, making passes, forcing steals, and not turning the ball over.

That's not replaceable. The players on the roster who will take his place in the guard spots will have to step it up.

The Husky returnees: Jeremy Lamb is the player who gets the most pub of the returnees. Playing for USA Basketball's Under 19 team who ended in fifth place this summer, Lamb is a smooth scorer who is very effective coming off of screens.

Many expect a leap into stardom for Jeremy Lamb. For a guy whose offensive rating was already 115 per KenPom, there's not a lot of room for leaping. His three-point percentage could be better, as could his ability to create.

Dd all the attention given to Kemba, and Kemba's passing, make Lamb much better? Can Lamb be as good creating on his own, or when receiving passes from Shabazz Napier?

Napier, the incumbent point guard, is a quick, attacking guard with a few out-of-control moments in each game. Can he harness those mistakes and reduce his turnovers? Can he convert shots in the paint? Can he lead a team?

Alex Oriakhi is a rock inside for the Huskies. He's big, he's agile, and like many Husky big men before him, his defense will continue to be better than his offense. His backups - Olander, Bradley, and Wolf - are anonymous but tall.

Roscoe Smith came to Storrs with some pub, but didn't make a huge impact on the court; the Stanley Robinson-sized wing will find himself pushed by the newcomers, as will Neils Giffey.

But that could work out well; depending on one player to create and score leaves that player exchausted midseason, and leaves the team defensible. To Kemba's credit, he often shredded those defenses - and got a lot of timely help from the focused and defensive-minded teammates. If those teammates become legitimately dangerous players in their own right, and the defense improves, you have a stylistically different but potentially better team.

Yes, Tyler Olander started, but those five were the core of the team. The difference is Drummond for Kemba. Kemba was a junior, and the NCAA game is very favorable for quick guards. Dominant big men can take a little time to make an impact.

But big men who are considered lottery picks the next year?

They tend to make things happen on the court. Given U Conn's history of developing big men, including the plodding Hasheem Thabeet, the agile Emeka Okafor, and the workmanlike but undersized Jeff Adrien, one has to believe that Jim Calhoun's Huskies can make Drummond into a solid trade for Kemba.

And for ballhandling, Ryan Boatright comes in to play the Shabazz! role - a sparkplug guard who can handle and score.

Somehow, the speedy and athletic DeAndre Daniels is an afterthought here. He might be the player who makes the Huskies better than last year.

Last year's team had (possibly) four players who made strong positive impacts on the court - Walker, Napier, Lamb, and Oriakhi. If Smith develops, that's a strong starting five. And now, the Huskies will have a bench with some possible punch in Daniels and Boatright.

The rest of the players are the on-court version of gravy. If Bradley and Olander develop into players who do more than stand tall and take up space, if Giffey does something of note on the floor, if Wolf has an impact, that's a far deeper team than last year's squad. Last year, a number of players' impact to the team was simply to let Kemba or Lamb or Oriakhi catch their breath.