Back in May, written on this site:

In a nine man class that will be pretty much the entire Red Storm roster ... any defections or eligibility snags will damage the team's ability to compete in the Big East. The incoming class is already an adventure in youth; now the class will be an education on the tugs and tweaks of the NCAA eligibility process.

Unfortunately for St. John's, these words came true in the worst possible way, with three members of the Red Storm's top five recruiting class - Jakarr Sampson, Norvel Pelle, and Amir Garrett - all ruled ineligible for the fall semester, which lasts until mid-December.

Breathe deep. Take a moment and relax. Have a nerve-calming drink.

It wasn't just a bad dream. A third of the St. John's nine man incoming class - rated third nationally by outlets like ESPN, Scout, and Rivals - will not be coming to campus in the fall. The mocking has come loud and heavy from other fanbases (who have likely seen a recruit or two not qualify). The mocking of Lavin will be loud. And the excitement of the St. John's fanbase just dropped with a thunderous thud.

But no matter what the mockers say, having three players not qualify isn't a referendum on whether Steve Lavin is "dirty" or not, whether the St. John's basketball program has lost its way, or on the character of these three high school players.

We'll look at some pressing questions, how this happened, what comes next, and at young teams in college ball in the next week and a half.

First: A breakdown of the main questions and answers, after the jump.

Will this damage the team's ability to compete in the Big East?

Yes, but not for the reasons you may think.

The first thought is that Norvel Pelle was going to be some kind of difference maker. But we don't know that. From what we do know - that he's a long center with "potential" that he hasn't realized - he would likely struggle more than people think.

Big men are often recruited on their ability to be something better; you can't teach height, but you can teach post moves, how to play team defense, and how to rebound better. Norvel may have been ready to play major Big East minutes, but I wouldn't have bet big money on that.

The real issue is team depth. God'sGift Achiuwa is the only post player in the bunch. Even if he is a real revelation, asking a newcomer to play 40 minutes is a bit much.

Who plays behind him?

If there are no replacements, a player's performance and attention starts to fall off as they get exhausted. The one possible strength of the team was the interchangeable fresh bodies for constant high-energy pressure; that will be hard to achieve now.

Will they (ever) be eligible?

Norvel Pelle, Jakarr Sampson, and Amir Garrett will attempt to be eligible by spring semester - or specifically, by just after the end of fall semester, as Rob Thomas did back in 2008. What's likely at stake is the right ratio of grades in core courses to SAT scores, as defined by the NCAA's sliding scale (.pdf).

It's not as simple as "passing the classes". A recruit needs a certain average in those classes and a corresponding GPA. At the 2.0 cutline - which is still passing classes enough to graduate - a player needs over 1000 on their SAT. With a lower SAT score, higher grades are needed. Credits and classes have to transfer between schools, and whether or not those classes are taken care of has to be monitored.

All of which is to say that a player can graduate high school and not be eligible to play per the NCAA's rules.

Pelle, Sampson, and Garrett could currently be appealing the NCAA's decision or going to an NCAA-approved school to retake the courses they are deficient in. There could be core courses that the NCAA feels do not fit their criteria.

With a pair of players in Jakarr Sampson and Norvel Pelle who were known to have academic struggles in the past - so much so that some schools shied away from recruiting them - this has been seen as a possibility. If both players need a year to qualify, or even worse, Junior College, they may not be eligible for a long time and Lavin's plans may change. Or their desires may change.

Or they might return to the bright lights of New York. We'll track how this shakes out.

Can they suit up for St. John's in December?

Hard to tell how far behind they are. I'd bet on Amir Garrett suiting up for Lavin's Johnnies; he has been adamant about wanting to come to St. John's to play ball.

Will they still want to come to St. John's? 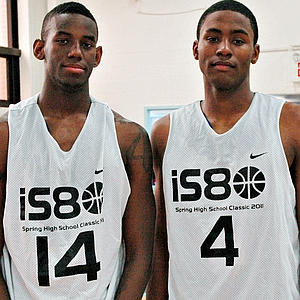 Jeff Goodman tweets that Jakarr Sampson might open his recruitment. That's a big, bold statement to put out without sources, so let's take that as possibly true.

Amir Garrett's father seems firmly dedicated to the idea of Amir being a two-sport star and suiting up in December - no plans for Amir to focus more on baseball after being drafted by the Cincinnati Reds this June and signed to a $1 million deal in August.

Pelle has had less published about him, but the rumor that he wouldn't qualify was true, so why not the rumor that he may just go back to the West Coast, possibly to play with Dwayne Polee II at San Diego State? Not that one should look deeply at a teenager's tweets, but Norvel has spoken of homesickness.

But Norvel has never turned tail and headed home; the potential of a loaded roster and a coach who puts players in the pro ranks may just bring him back.

Is it too late for the Johnnies to add anyone else to the roster?

They have already added one player!

Jamal White, a transfer from LIU... who was going to walk-on and played under 5 minutes in his year with the Blackbirds. Who play in the much lower-level Northeast Conference. Which is to say, he's a scholarship body, not a player. The Red Storm will have to make do with Harkless, Harrison, Lindsey, Achiuwa, Stith, and Greene.

coming up: how Steve Lavin got into this little pickle.