What will the team look like? How will they play? The Red Storm will be one of the most interesting developing stories in college basketball this year - a treatise on youth and talent, a story of a building program, and the introduction of a set of new stars to New York City basketball lore.

And as such, St. John's basketball is getting ready for the Red Storm Tip Off on Friday October 14th with a set of preview posters like the one of God'sGift Achiuwa, below the fold. 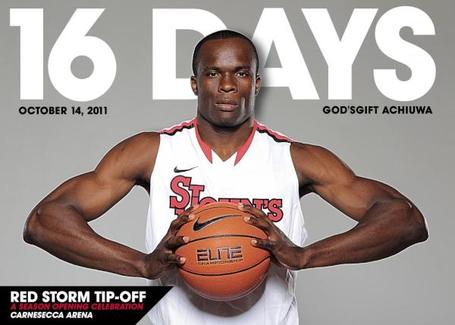 + Sean Evans is a member of Germany's Dusseldorf Gloria Giants, despite not yet appearing on the team photo roster. Coach Steve Lavin comments, "[Evans'] improved play was a key to our late season surge and push into the NCAA Tournament. We are confident Sean will take the lessons learned last year and add true value to his new team. His best days in basketball are ahead of him."

+ St. John's is looking for a few good walk-ons. Tryouts are Sunday, October 16th, as long as you go to the compliance meeting on October 3rd. And Lavin stated in interviews last weekend that he was looking to add 5 or 6 walkons for full practices... if there's a tall young man who has eligibility and can play a little bit, he might just get some playing time in Madison Square Garden. Live the dream.

+ Former commit Jakarr Sampson now has interest from Providence, Baylor, and Kentucky. St. John's assistant coach Mike Dunlap also visited Sampson at Brewster, so Jakarr is still an option for St. John's. Sampson is a very talented player, and the Red Storm could use him next year, or even this spring.

+ Former St. John's commit Jevon Thomas has committed to Dayton, closing the book on the Rosedale guard. The talented guard who will reportedly struggle to qualify for 2012 decommitted in the middle of the summer, after some lackluster performances in the summer league circuit and during the Red Storm's pursuit of Kyle Anderson. Visitors to the site overwhelmingly thought the Red Storm wouldn't regret the decommitment of Thomas... what do you think now?

+ Power rankings for all New York City area teams on Big Apple Buckets. Check them out... even if you'll be surprised to see St. John's at 6th.

+ Despite what we originally heard from Syracuse's president , Syracuse won't try to play ACC home games in the Madison Square Garden when they move to their new conference.