Another week of Big East play, and Syracuse remains dominant. But below the Orange, are patterns starting to emerge? It's not the halfway mark of league play yet, and many teams have a chance to turn their seasons around. But what projected to be a weak, hard-to-decipher middle of the Big East may just be a soft, tripping-over-their-shoelaces middle.

One Big East team is undefeated.

One has one loss.

Four teams languish at the bottom of the league table with 1 or 0 wins in Big East play.

The rest are working their way out of a mediocre morass; the next two weeks should add some definition to the league. 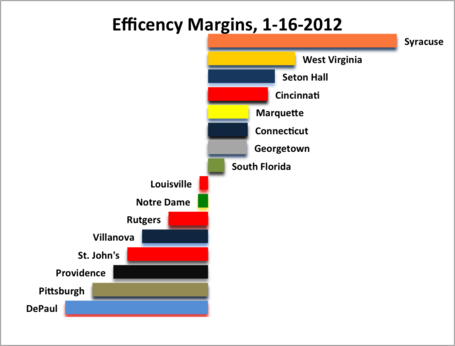 Yes, the Syracuse Orange looks ferocious, their defense impregnable, they will eat your children. But did you realize they have played a woeful Providence team twice? And a Villanova team that hasn't stopped anyone? And DePaul? The only top-half defensive teams they have faced are Marquette (who are no defensive powerhouse) and Seton Hall. Of course, the Orange crushed the Hall and scored 1.1 points per possession in doing so, pretty close to their in-conference mark.

They're a monster; but the giant gap between Syracuse and everyone else should shrink.

The same caveat could apply to the West Virginia Mountaineers, who have played Rutgers twice in the space of ten days. But the Mountaineers also defeated Georgetown. The interior defense for the Mountaineers hasn't been great - 15th in the league, only in front of DePaul. The only teams that they've held below 50% shooting on their 2-point attempts are Rutgers (the second time) and Georgetown.

The Seton Hall Pirates continue to be effective, despite a 1-point loss at South Florida where small mistakes - and the Bulls' size - led to a last-minute defeat. They're no longer ranked; but they might be the third best team in the Big East.

The Pittsburgh Panthers are not hard to understand - they're playing like the worst team in the league. Dixon's squad is defensively lenient in every game, and struggling to put up points in the last two contests. Against Marquette, they managed to keep the pace closer to their average, and were striking distance of the win. Slowing the game down - and fighting for more offensive putbacks (instead of just offensive rebounds) - can help them get closer to wins.

Despite a poor non-conference season (losing badly to Auburn?!), the South Florida Bulls lost by three to UConn and has beaten Seton Hall. South Florida may no longer be a bad loss in the Big East. Behind excellent defensive rebounding and an ability to hit free throws, the Bulls are a surprise. Their middle of the pack shooting and poor defensive numbers on field goal shooting is a flag.

Games of note this week: