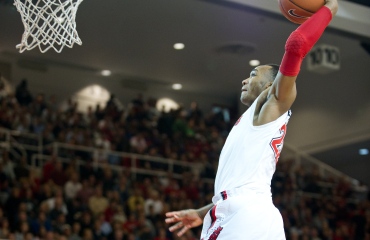 His athleticism has no limits, but you can say a thing or two about his skills and dogged tenacity as well.

Amir Garrett, who committed to the St. John's Red Storm in November 2010 as the 68th ranked recruit nationally according to Rivals.com, is beginning to identify an on-court role. The high-flying and long-wingspanned wing man from Los Angeles took a while to look comfortable, with good reason. Thrown into the heat of game action once eligible in December, Garrett is quickly transforming into an effective asset and a true factor.

Garrett was one of the three 2011 St. John's commitments who were deemed academically ineligible in September. Unlike the other two, JaKarr Sampson and Norvel Pelle, Garrett decided he would enroll at Bridgton Academy (ME) to work towards a December reemergence.

Once the 6'6'' forward did finally emerge on the Carnesecca Arena floor during the Red Storm's win over Texas Pan-American on December 21st, the St. John's fan base thanked him for his loyalty and outward effort.

A month into his career as a Johnny, as Amir Garrett begins to look like the player Steve Lavin anticipated, those same fans are starting to thank him for his floor awareness, defensive activity, and offensive spark.

It would be highly unfair of anyone to expect Garrett to have fit in with this St. John's team from minute one of game one. His teammates, five of whom were ten games his elder, had gone through the rigors of facing Arizona, Texas A&M, Kentucky, and Detroit. Until that point for Garrett, it was just textbooks and an empty gym.

And yet, Garrett was announced as one of the starting five players for the Johnnies on Saturday for the first time. Dunlap says the starting unit is decided by how the players perform in practice. Why does it not surprise me that Garrett is opening eyes behind closed doors, even if his importance is not always seen on the stat sheet?

But when you look at Amir Garrett's basic statistics through his nine games played, it's doubtful that you need to reclaim balance. His 4.3 points and 2.7 rebounds per game don't make him eligible for league honors. His conversion of 47.8% on free throws and 20% on three-pointers might make you question the validity of such praise.

It is safe to say that Amir has much work to do developing his shooting form. His low percentages from both the line and behind the arc provides the color for such claims. But, luckily for St. John's and its fans, Garrett's shooting seems to be the only basketball facet he really struggles with.

"His knowledge of the play book is limited," said Mike Dunlap following the Johnnies' heartbreaking loss to Villanova on Saturday. "He is getting more comfortable with what he's doing. It'll take another month for him to really know the play book and system."

It doesn't seem that Amir will have much difficulty learning what else he needs to absorb. His basketball IQ is impressively high, and he has been better every game.

From what could have been guessed following Garrett's effort to join his future teammates throughout the fall, his game is predicated on effort. His utilization of his natural length to cause havoc for ball handlers and prospective paint invaders is a coach's delight.

Garrett has proven, most notably in the home losses to Louisville and Villanova, that he can cause turnovers in the backcourt in one-on-one situations. His wingspan and active hands creates a number of problems for guards looking to advance the ball.

Garrett's steal from the Wildcats' James Bell following a Moe Harkless turnover gave St. John's the ability to stay in a game that seemed to have slipped out of reach. He never stops working.

Once his pick-pocket is completed, you feel confident. So does he. Garrett's true value is his ability to maintain body control and finish around the basket in transition. You may not want Amir shooting a 20-footer before an expiring shot clock, but you'd do anything to get the rock to him on the run.

Now you can see why Steve Lavin and his staff worked so diligently to gain Garrett's commitment and agreement to stay with the program through adversity. The forward is perfect for Lavin's fast-paced system.

He just needs to learn it completely first.