Once again - Big East Efficiency Margins. This version is short, and I may add notes later to add some Four Factorsian analysis. But enjoy the table, and next week's version will be robust, comprehensive, and will definitively tell you who will win the Big East.

Really. Also, the world is going to end in May.

Yes, the Syracuse Orange lost. One cause for concern - with the athletes they have, they should be drawing fouls on a higher percentage of their shots. They are eighth in the league with a 34.3% free throw rate.

I'm not sure that the South Florida Bulls are the third best team in the Big East, but they may just be pretty damned good. I bet they'd love another crack at Connecticut, whose defense has been rocky, and have struggled a bit against physical teams (Rutgers, Seton Hall, but not against West Virginia). The Huskies give up enough defensive rebounds to make their defensive efficiency 11th in the conference, despite being tops in eFG% allowed.

Facing two competent teams in West Virginia and Connecticut taxed the Cincinnati Bearcats' defense; and right now, the only thing they lead the conference in is defending without fouling. But when a team is tenth in the league in field goal defense (measured by Effective Field Goal %), can we still call that defending? Thankfully, the three-point shooting (and the choice to attack from outside) is working for the Bearcats on offense.

After eight games, one thing is clear - Villanova's defense is awful. Teams must be licking their chops at the prospect of some member of the squad posting a new career-high in points scored. Maalik Wayns is carrying them as a ballhandling shooting guard, and JayVaughn Pinkston - the former McDonald's All-American - is coming along nicely.

What else are you seeing? 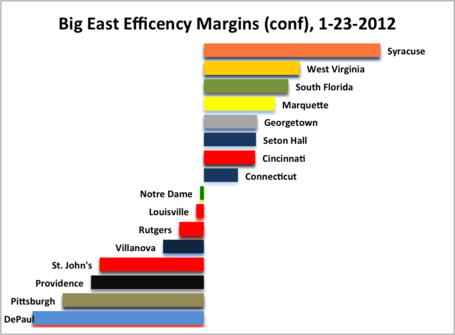