Is it that time of year where St. John's makes the Garden rumble?

The Johnnies welcome Rick Pitino and his pressing, trapping Louisville Cardinals to MSG for the first half of a college hoops doubleheader (Iona/ Siena comes afterwards). For St. John's (7-6), the team wants to avoid slipping to .500. For the Cardinals, their top-5 ranking has been damaged by two straight losses to Kentucky and Georgetown.

This is a game where ballhandling fundamentals are key. Steve Lavin likes the John Wooden quote "be quick, but don't hurry", and that is key. The Cardinals love it when opponents hurry, even into what look like good, open shots. Even into drives at the rim. A fast transition game is what they're built for...

...And if they get a bunch of stops, or force turnovers from their traps, they are off to the races. Phil Greene and D`Angelo Harrison (and Malik Stith) will need help from their teammates - recognizing traps and coming back quickly to receive passes.

Read more in our preview/ keys to the game: Game 14: St. John's vs Louisville

And bringing back the lookalikes... as stated in the pregame: 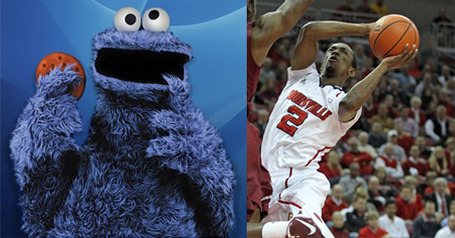 Well, I think they look alike. Russ Smith has averaged 19.2 points per game since the IUPUI game (when Rakeem Buckles returned to full health) and has been putting up 14 shots per game in 24 minutes per contest. Before that? Smith played 26 minutes per game, averaging 12.3 points per contest. He's growing into his "microwave" role, and isn't shy about shooting.

If Chris Smith and Kyle Kuric struggle to generate offense, expect a whole lot of Smith, the Brooklyn native from Archbishop Molloy HS in Queens.