Half a Big East season has gone. And what do we know about the Big East?

Syracuse is still the best team (and we'll discuss the caveats below). DePaul is probably the worst team. Seton Hall is dropping like a stone in a lake. Mike Brey is making room for another Coach of the Year award. South Florida is still the fourth best team, but continues to thrash in a morass with Connecticut, Georgetown, Louisville, and Notre Dame.

And Pittsburgh looms, eyes peeking above the water, shaded by a terrible record and a loss to DePaul, with their impact player back on the floor. And St. John's may also be creeping around the corner. And Rutgers... if someone can explain that team, be my guest.

Seven teams have between three and four losses in conference play, and based on the tempo-neutral scoring statistics for and allowed, there is no breakout/ delineation between the league in sight.

Efficiency margins and notes, below the fold.

This time, we include the efficiency margin change from last week's numbers.

The Syracuse Orange without Fab Melo's ability to alter shots are a slightly different, more vulnerable. Or maybe it's Melo's impact coupled with Rakeem Christmas' statlines. Against West Virginia, he registered a rebound, a steal, and a block. That's it. In 14 minutes. Baye Moussa Keita had more impact. Even before the goaltending call that may have saved the Orange from overtime. Neither player replaces Melo. It's becoming obvious that without him, the Orange are a little closer to the rest of the pack; and the rebounding on both ends could use serious improvement.

Syracuse is still the boogeyman of the Big East; all of the other teams seem rather beatable. 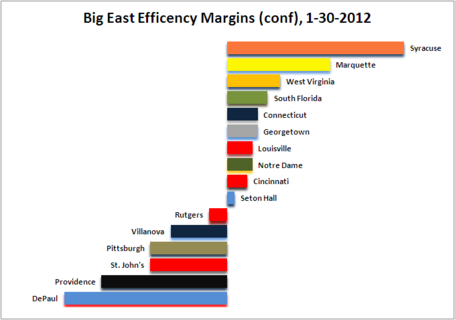 Are the Marquette Golden Eagles the second-best team in the Big East? They're probably the second most exciting. A Marquette game has fouls, dunks, funks, runs, groans - it's a real roller coaster, whether they manage to play fast, slow, or fast with many chances to catch breath at the free throw line. They've scored solidly over a point per possession in every game except against Syracuse, and their ability to force turnovers keeps them on the winning side of games. But what will they look like against Notre Dame and Seton Hall, two teams that protect the ball?

West Virginia were clobbered by St. John's. But they were a possession away from Syracuse. The Mountaineers continue to defend without fouling, rebound, and attack the free throw line; but the last trio of games have seen them give up well over 1 point per possession from the field. These things happen, but Mountaineer fans have to hope that Huggins' young charges haven't been figured out. They have two games left against Pittsburgh, who may be coming around - and two against Notre Dame as well.

If this keeps up, the Big East will have to re-introduce the South Florida Bulls at the Big East Tournament. No one wanted to talk to Stan Heath in the fall; this year, he's piloting one of the more sup rising turnarounds in the country. Well, we think so. After all, outside of Marquette, the Bulls have played the league's worst teams - Providence, DePaul, and St. John's - in their recent stretch. With two games against Pittsburgh, and Georgetown, Syracuse, and at Louisville coming, it's too early to start buying USF gear and telling your friends you've always been a closet Bulls fan.

I know it's pretty limp to write "I don't know", but I don't know what's up with the Connecticut Huskies. The field goal defense is good. They don't foul. The Huskies still block shots. But they haven't been dominant, dependent on interior scoring and whoever chooses to help Jeremy Lamb. The return of Ryan Boatright couldn't happen quickly enough - they need some scoring punch, another playmaker, someone who makes some kind of impact on the stat sheet.

Right now, the loss to Pitt stings the Georgetown Hoyas. The loss might look better; but a two-game lull where the Hoyas scored under .9 points per possession is a real cause for concern. After a nice game against DePaul, Jason Clark continues his clankfest (Jason... Clank?), and Hollis Thompson has been held in check. Defense is nice, but the Hoyas could use offensive help. Their second half includes Syracuse, but also includes Providence, Villanova, and this week's tilt against Connecticut - a battle for the Big East's expanding middle that could make the Hoyas' offense look solid again.

Louisville intersperses good offensive performances with bad, and are in the middle of the pack in turnovers forced per possession. Louisville also gives major minutes to Peyton Siva and Russ Smith. It's a coincidence, I assure you. They should enjoy the sloppy joe that is Rutgers this week.

The Notre Dame Fighting Irish have beaten Syracuse, Seton Hall, and Connecticut, boring viewers with what we all think of as Big Ten ball along the way. I'd make jokes about how slow they are, but South Florida plays slower. Here's a tidbit that will bowl you over - the Irish are the best in the Big East at stifling three-point shooting (opponents shoot 29.4% from outside the arc), and leading the league in defensive effective field goal percentage.

If your mind's blown like mine is, also consider that the Irish take the most threes in the conference... and make the second-lowest percentage (28.9%) of their threes. So to recap: teams don't score on the Irish, their games are dead slow, and they can't shoot accurately. They're facing Marquette this weekend - the second-most exciting team against the most boring.

The Cincinnati Bearcats are easy to figure out - they shoot too many deep, challenged jump shots, they don't rebound well on either end, and they're not particularly good at defending. If something drastic doesn't happen soon, this team will get to host home games in the NIT.

On a four-game losing streak, the Seton Hall Pirates are the current surprise of the league. They were on the cusp of a national ranking, got snubbed, and proved all the snubbers right. Their effort and coaching stats are strong - they rebound, they protect the ball, they defend. But the Pirates also foul too much, and even worse, they only have one way to score - via the three-pointer. And when their three scorers (Jordan Theodore, Herb Pope, and Fuquan Edwin) aren't hitting... things get grisly.

The Rutgers Scarlet Knights really show their youth. Heavy on turnovers forced and given up, and prone to fouling, the Knights have managed to knock off Florida in the non-conference, Notre Dame and U Conn in conference... but lost to DePaul. The Rutgers chaos is in search of some control, but star Eli Carter is carving a name for himself.

Villanova continues to struggle on defense, though they faced two talented teams - the inconsistent Louisville and the exciting Marquette squad. The Wildcats continue to be led by the quick-shooting of Maalik Wayns and Dominic Cheek, who can be streaky; Javaughn Pinkston is coming along and James Bell is asserting himself more. The defense might be getting better, but it's hard to tell with the Villanova turnovers, giving up easy shots the other way.

Ashton Gibbs scored 8/17, 22 points against Providence. Travon Woodall had 9 assists (and 17 points) for the Pittsburgh Panthers. Against Georgetown, Gibbs scored 13 points on 8 shots, and Tray Woodall had 10 assists. I'm not saying PLAYOFFS [Mora voice], but Jamie Dixon may be coming up with an effective plan now that Woodall is in the fold. With Syracuse and Marquette and Georgetown out of the way, the Panthers may have a favorable schedule, especially if they can handle West Virginia tonight and on February 16th.

After the loss against Duke, there is a lot of excitement around the St. John's Red Storm. The team has scored more than a point per possession, and Maurice Harkless is emerging as a go-to player along with D`Angelo Harrison - H&M, if you will. (I didn't invent that, but I like it.) The defense has been better as well, holding down the three-point shooting of Villanova and West Virginia and getting out in transition after forcing misses. If this team can run... watch out. The Johnnies have two games against DePaul on the docket.

For the Providence Friars, defense continues to be a non-contact sport. And since the Louisville loss, the defense hasn't just been bad, it's awful. Syracuse scored a healthy 1.13 points per possession against the Friars. Bad, yes. Worse: 1.22 scored by Marquette. 1.25 scored by Pitt. 1.33 scored by South Florida. South Florida has a good offense, but they ended with an 8.2% turnover percentage, only took 13 threes, and scored 81 points in 61 possessions. Granted, the Friars also scored very efficiently... but that's awful, awful defense.

The DePaul Blue Demons have nice pieces, but are struggling to score. The outside shooting is okay, but the interior shooting is poor - at times, thanks to errant shots from Cleveland Melvin and Brandon Young. Freshman Jamee Crockett is making an impact, but he can't help the Blue Demons' terrible rebounding and poor defense from the field - they are 15th or 16th in defending two-pointers, three-pointers, offensive rebounding, and defensive rebounding.

BONUS TABLE - Each Big East team by their ranking in each of the Four Factors.