Halfway through the Big East season, St. John's is turning heads despite the team's extreme youth... and extreme lack of depth.

With Steve Lavin sidelined as he recovers from prostate cancer surgery, and having lost one recruit at midseason from a team already at a razor-thin eight scholarship players (with seven who play), the all-new Red Storm have struggled with the pains of on-court development in the Big East.

Mike Dunlap and the remaining staff have used the blowouts as teaching moments, have held the players to standards while massaging their egos, and have been developing them as players who can subsume ego for winning basketball. Moe Harkless and D`Angelo Harrison have emerged (H&M, if you will, for Harrison and Moe), with Harkless winning two Rookie of the Week awards and Harrison winning one.

The youngest team in the nation (weighted by minutes and class designation) are far from an NCAA berth, and likely far from any postseason, but there is promise in the future.

Yes, a team that has gone 3-7 in their last ten games can show promise. This extended version of Storm Warnings delves deep into the Johnnies at midseason, a look at the Red Storm's last ten games by team and by player, below the fold.

First, some essential team statistics - the (fairly) positive stats in green, the more negative stats in blue for "cold". The stats are for just-ended 10-game period, including 9 conference games and the non-conference game against Duke.

Mind you, the numbers are skewed by some good performances against West Virginia, Duke, and Providence, and skewed the other way by struggles against Georgetown, South Florida, Louisville, and others. What's the true level of this team? It's hard to know.

A sign of good coaching: the players know not to jack up bad threes. Kudos to the staff, who have gotten 6 top-level freshmen to accept their non-starring roles; many a team has found trouble trying to tell a player who was a high school star to concentrate on defense, or rebounding, or something other than getting buckets.

Running and early offense is the best way to get the offense moving. The team hasn't been terrible at scoring inside the arc, hitting 48% of their two-point attempts. For comparison, the 2011 class that just graduated hit a little over 41% of their shots inside the arc in the freshman year of Justin Burrell, D.J. Kennedy, and crew. That's a positive.

But this Red Storm team has been inconsistent at converting deep in the paint (within a sneaker's length of the charge circle and in). Against Providence, they hit 75% of their shots around the rim, and against Louisville and Georgetown, they hit under 40% of their shots. Obviously - and for most teams this would be true - they are better scoring in transition.

And playing in the halfcourt increases the chance that the team will need a bailout three-pointer. And that's not been a pretty sight. The Red Storm rank near the bottom of the NCAA in converting three-point shots. D`Angelo Harrison shoots a respectable percentage from outside of the arc. The rest... do not.

The team is defending inside the arc despite their lack of big interior size. Since the Marquette game, opponents have been held to 45.2% or below inside the arc. The Johnnies have also forced turnovers at a solid rate, around 22% of opponent possessions in the last 10 games.

Defending is one thing; ending possessions is another. The turnovers are good; but when opponents get shots deep inside the arc, they often get a SECOND chance to make a scoring impression. Allowing opponents to snag over 42% of their misses is the worst mark in the Big East conference, and the team's defensive rebounding rate is one of the worst in the nation. More discussion of that below... in the individual players.

"I just care about winning. I know that my role on the team is to get a couple of buckets here-and-there just to keep the defense honest." - Sir'Dom Pointer

Moe Harkless: Harkless' in-season improvement has been astounding. He's always taken shots, but he's looking to create more aggressively and is converting far better than he did in his first 11 games. Coming into the Providence game, Harkless was a nice athlete who shot 48.5% inside the arc, 21% outside the arc, averaging 13.9 points and 8.1 rebounds per game.

In the last 10 games, he's shooting 64.3% inside the arc, 27% outside the arc, and is averaging 19.3 points per game and 9.5 rebounds. He grabs 20.6% of the available defensive rebounds, by far the best on the team. Moe Harkless also blocks shots. He's become efficient, solid; if he can keep this pace up for the rest of the season, he'll run away with the Big East Rookie of the Year honors.

Still, he needs to improve on his three-point shooting and draw fouls. Both of those may be coming; he was aggressive in the recent three games, which will bring on foul calls. And his shooting has some range; there are at least two deep two's he's taken that were inches from being three-point attempts. Harkless is hitting his (long) stride. 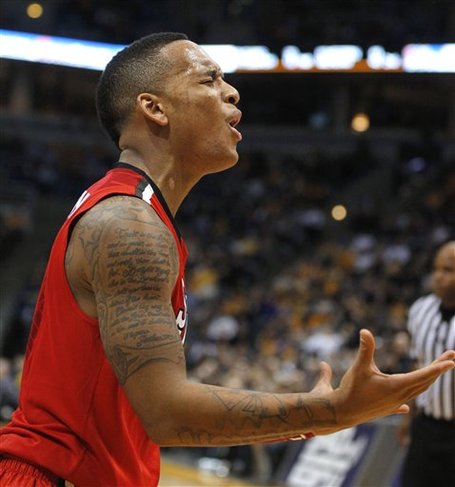 D`Angelo Harrison: (photo of D`Angelo Harrison by Jeffrey Phelps, AP) Harrison has been solid from the first game of the season. And as St. John's lone three-point shooting threat, he's vital to the team's offensive success. Yes, the team can struggle even if he's hitting. But when he's held to single-digits in points, the team has a hard time scoring - see the Marquette loss, the South Florida loss. Those single-digit games were ones where he struggled to score OR get to the free throw line. Harrison has been a dynamo, handing out assists, playing with an internal fire, and trying to make defensive plays.

Harrison needs to improve his defense and stay on the court, not on the bench in foul trouble; and one wonders if another consistent scorer or penetrator wouldn't help him be a more efficient shooter from all over the court. His free throw shooting percentage and mid-range shooting percentages indicate that he should be an explosive shooter; his stroke is fairly accurate. Harrison should continue to be a playmaker for the Red Storm, a three to four year leader who will give the rest of the league fits.

God`sgift Achiuwa: For some, Achiuwa has been a bit of a disappointment. He has games where he establishes himself as a scorer in the paint, drawing fouls. And he has some games where it's hard to remember that he was on the floor. A big problem is that Achiuwa is better in transition than in the post, where his lack of height and inconsistent handle hurts his ability to get shots off.

He's effective when he gets his shot off, but the situations where he can put the ball up are limited. He draws a number of fouls compared to how often he shoots. Note that his free throw shooting percentage has dipped to 64% in the past 10 games. Before the Providence game, Achiuwa was hitting 74% of his foul shots.

Achiuwa's offensive rebounding is decent, but his defensive glass work barely registers - his 9.4% defensive rebound rate is around 75th among players in the Big East. Still, he's given up on shooting three pointers (after going 0-5 in the first two Big East games) and his size allows him to hold position in the paint and make it difficult for opponents to convert down low. Achiuwa has lost his starting position, and we will keep our eyes out to see if that affects his game in any way.

Phil Greene: Phil Greene, heading home to Chicago for the game against DePaul, is developing as a point guard. He tallied 8 assists against West Virginia, 5 against Villanova, and has looked more confident in defining his game in the past two weeks. His two-point shooting hasn't been impressive, but in the past four games, he's shot just under 50% inside the arc, confidently stroking jumpers off of the dribble.

Greene is finding his role on the court, hoping to be the third offensive option. If he can continue being effective in the mid-range, he might just be that guy.

Sir`Dominic Pointer: Pointer is having a hard time putting up points. He's gone 1/15 from beyond the arc and 44% inside the arc. But he continues to block shots (1.2 per game), steal the ball (2.1 steals per game), and gamely try to defend the paint. Given his skill set, ability to move his feet, and rebound percentages, Pointer would probably benefit the most from more depth in the post - he'd be able to defend at the top of the zone and the wing, not in the paint.

Dom needs to improve his offensive skill and range; nearly two-thirds of his offense happens mostly around the rim, where he's only converting 48% of his shots, which is a bit low. One underrated aspect of his game has been his passing - even though he's made some bad passes, he's got his head up to make plays.

Amir Garrett: Garrett has been a nice glue guy for the Red Storm. Amir's shot hasn't fallen much at all - he's 2/12 outside of the arc, 45% inside the arc with ALL of his makes coming around the charge circle and inwards, and he's a 54% free throw shooter. But Amir's 5.5 points per game come with tough man-to-man defense, 1.5 steals per game, and an improving rebounding game. His energy and activity help create a hectic defensive atmosphere; we'll see how much he affects the defense in the second half, especially now that he's joined the starting lineup.

Malik Stith: Pops has been as expected - a low-usage, last option on offense, an occasional pest on defense, and basically a fresh body and an undersized shooting guard off of the bench. He's willingly given way to the younger players, filling in when necessary.