St. John's travels to the midwest for a Saturday matchup against the surging Cincinnati Bearcats at Fifth Third Arena (it needs a nickname. "The Fraction?"). The Red Storm (7-7, 1-2 Big East) come off of a pair of losses to Connecticut and Louisville, both ranked teams with a solid amount of experience and ferocious interior defense.

Mick Cronin's Cincinnati squad welcomes the Red Storm with a 12-3 record, a 2-0 record in the Big East, and with a new style of ball necessitated by suspensions from the Xavier/ Cincinnati game.

The Johnnies continue to be piloted by Assistant Head Coach Mike Dunlap as Steve Lavin recuperates from prostate cancer surgery. Three days ago, Lavin told the LA Times that there's a chance that he will not return until February - or even next year.

This news that will hang over the basketball game. But the young Red Storm squad will be focused on finding weaknesses in a Bearcat squad playing a style and personnel they've only had all together for the last game, a 71-55 win over Notre Dame.

The Bearcats have been a different team since their brawl with Xavier, and we'll detail how they've been different (hint - it's all on offense), below the fold - along with strengths/ weaknesses, keys to the game, links to watch the game online, and more.

There are many beautiful things in the United States, from California, to the New York Island, from the redwood forests, to the gulf stream waters...

Cincinnati/ St. John's games are never going to be part of that song the way the teams are currently constituted. But the Bearcats may have changed their style dramatically since the last time these teams have met. A look back at the perennial opponent will come in the morning, but for now - a look at tomorrow's matchup.

St. John's comes off of a rough shooting performance against Lousville in a 73-58 loss at Madison Square Garden. A 5 for 35 first half doomed the team, and the second loss in a row saw the players hurrying shots, missing shots, and struggling to find cohesion.

That is what youth on a basketball court often looks like.

St. John's freshmen are showing moxie in continuing to fight, but there is always the worry of the demoralizing beating that squeezes out any chance of surprises later. But this team seems driven and tough, talented enough to expect to win some of these games. Louisville and Connecticut are very good teams, ranked in KenPom's top-30. Cincinnati is ranked 43.

Cincinnati's 12-3 record is in some ways as imposing as Providence's 11-2 record coming in to the game against St. John's. Though the Bearcats have two Big East wins, Notre Dame is weaker this year and Pittsburgh is diminished to start Big East play.

Cincinnati's losses: a blowout at the hands of Xavier which ended in a brawl (video). A home loss to a decent Marshall team. A loss to the Presbyterian Blue Hose, a small (1300 student) liberal arts college in South Carolina that recently went Div-1. Their wins are a collection of the nation's weakest teams (and the Oklahoma Sooners, who are still prety weak). Their non-conference strength of schedule ranks 337th out of 345 teams.

Still, between the weak schedule and the changes Cincy made to their style with the suspension of big men Yancy Gates and Cheikh Mbodj, and the addition of Jaquon Parker from injury, it's hard to say just how good this team is.

In two conference games, they've looked for transition baskets, and if those don't materialize, have bled the shot clock nearly dry. Playing four guards, their turnover percentage has been a miniscule 13.3%, while they've turned opponents over on 23.5% of their possessions.

The defensive style is about pressure, but in a different way from Rick Pitino's pressure; the Bearcats don't foul, and they play for deflections, steals, disruption, and man-to-man (ish) coverage. (Pitino's defense is happy to just make the other team take bad shots).

Except for the ability to get to the line, everything has improved for Cincinnati since the brawl. Their 4-guard offense - and the improvement of JaQuon Parker, currently shooting 63.6% from beyond the arc (that's not a typo) and 48.6% inside the arc - has made a real difference. Meanwhile, Cashmere Wright has cut down on his numerous turnovers (from 3.1 per game to 1 per contest) and has piloted a faster attack.

The Bearcats have had 3 more possessions per game since the Xavier contest. Only their free throw rate - the ability to get to the line as a percentage of shots taken - has gone down.

And in visual form: 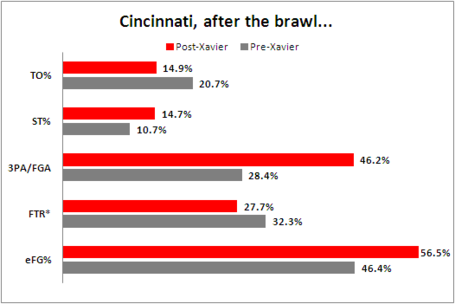 They've been a far better offensive team - shooting better (and taking almost half of their field goal attempts from beyond the arc), turning the ball over less, and the only drawback has been fewer of their already-infrequent free throw attempts.

This turn has been without Yancy Gates, for all but the last game against Notre Dame, which was a comfortable win for the Cincy program. Gates is a big who shoots 45% inside the arc - fairly inefficiently for a big man. Yancy came off the bench in his first game off of suspension. Expect him to play major minutes; will his need for touches hurt the Bearcats' offensive flow?

Bearcat Strength: Being bothersome. The Bearcats defend without committing fouls, like St. John's does. But the Bearcats also deflect shots, get in the way of passers, and make offensive flow difficult. Dion Dixon and Cashmere Wright have been good at earning steals, but on this team, theivery is a team effort.

Bearcat Strength: Three-point defense. The Bearcats have allowed Pittsburgh and Notre Dame to shoot 21% from beyond the arc in their two games. Their guards cover the perimeter well.

Bearcat Weakness: Rebounding, possibly. With a smaller lineup, the Bearcats have allowed 38% of opponents misses to go back to the opponents. It might be the difference between Justin Jackson (who grabs 16.9% of available defensive rebounds) vs the burlier Yancy Gates (who snags 22.5% of defensive boards) on the floor.

Bearcat Weakness: Not drawing fouls. There are a lot of jump shooters on this team, including the sometimes contact-averse Yancy Gates. Dion Dixon leads the team with 76 free throws; no other player has more than 36. And Dixon will snap off a number of quick, off-balance midrange jumpers himself.

The Five Points, or, Keys to the Game

Get inside. The Bearcats defend the three well, and the Red Storm don't shoot the three well. Shooting the ball 41% of the time from the perimeter - like they did against Louisville - will not cut it.

Show first-half pep. The team has had some nice moments in the second halves of the two Big East losses when the opposing defenses have loosened up, but they need to find offense earlier. Maurice Harkless, in particular, is on the spot. The team has really struggled to generate offense in the half court in the past five games.

Good ballhandling. The Bearcats bother ballhandlers and make passing and dribbling difficult. Phil Greene needs to find ways to get to good spots on the floor with his ability to change speeds and not turn the ball over - or take rushed, contested shots in an attempt to carry the team.

Continue to work the effort. St. John's has been credible on the glass despite their size, and they have defnded decently and forced turnovers. The hustle stats can make the game a little closer than the Bearcats would expect it to be.

Clog the paint then run. The Bearcats will sometimes drift away from contact and from the inside of the arc; make sure they think the easier shots lie 10 feet and further from the basket. Their misses can cause runouts and foul-drawing opportunities.

Prediction: The Red Storm have a chance in this one, but the defensively-minded Bearcats win at home, 66-60, Cincinnati.