Two weeks into the Big East season, and there is one dominant team, a number of clunky offenses, some good defense, a former stalwart of the Big East flailing, and Providence being what we've come to know of as Providence despite their 11-2 non-conference start.

To take a look at the league, it's time to fire up some tables and see what tempo-neutral efficiency margins

This is the first installment of an exercise we did last year weekly (give or take a week), to get a sense of which teams are hot, which teams are not, and whic teams are just flat-out confusing. 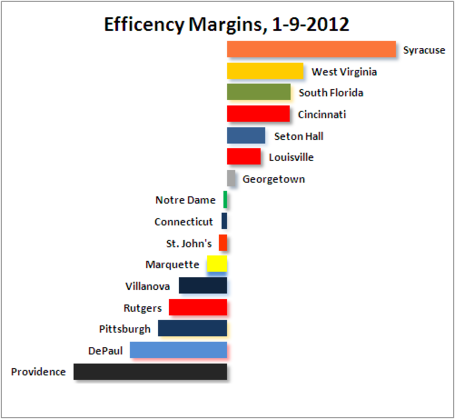 It's early still, three to four games of the Big East slate for most teams. So it's hard to take much away from the teams' efficiency margins, except at the top and the bottom; in four games, one result can skew the teams' efficiency margin one way or the other. For example - St. John's demolition of Providence keeps their margin around -1, despite being summarily housed by Louisville and Connecticut.

The Syracuse Orange have been obviously dominant, and no other team is close. They have been deadly on offense inside the arc and very good outside the arc. On defense, they're a notch behind Cincinnati in some categories - and have played Providence and DePaul, so take the numbers with a little grain of salt. They're stealing the ball and blocking shots at elite levels, and Dion Waiters may be the best sixth man in the country, continuing the promise in the counting stats that he showed last season in limited time.

But the West Virginia Mountaineers, behind unheralded players and the re-emergence of Kevin Jones as an offensive rebounding, high-usage, low-turnover, interior scoring machine (he's only shooting 26.7% outside of the three-point arc in Big East play), is a surprise near the top of the table.

South Florida's defense has been nothing to write home about, but the Bulls have found themselves putting up points courtesy of sparkling accuracy from beyond the arc and at the line and good point guard play (assists and turnover numbers) led by Anthony Collins.

The Seton Hall Pirates have been quite the story (especially with the snub from the Coaches' Poll today), and they're performing their miracles with defense- a continuation from the end of last season. Their field goal defense is very good, and teams are taking their shots inside the arc. And while their interior offense is worst in the league, their three-point shooting has been the best in the Big East so far. They're hitting 40.5% of their shots.

On the other end, the Pittsburgh Panthers have been a poor shooting team that struggles to get to the free throw line. But the offense has been okay - especially in comparison to the defense. Pitt doesn't foul, which is good; but teams are getting very comfortable looks from the perimeter, and players are setting up and shooting like it's practice, hitting 41.2% of their perimeter shots. The interior defense isn't much to write home about, either.

The DePaul Blue Demons have enjoyed a win over Pitt (that sent the Twittersphere into shock at what the Panthers have become), but was beaten badly in their other two contests. There is hope for the Blue Demons, but losing to a scuffling Villanova team is likely an indication that any steps out of the bottom quartile of the league will come next year (at earliest). They play fast, but their interior defense is terrible, and their rebounding follows suit.

Meanwhile, Ed Cooley's Providence Friars haven't had a great opening four games to the Big East season. The ballhandling has been careless and the defense can't force turnovers, or stop outside shooters.

BONUS TABLE: The in-conference ranks by the Four Factors for each team.