St. John's tries to build momentum against the DePaul Blue Demons. By scoring/ efficiency margins, the Blue Demons are the worst team in the league, but do have wins over Rutgers and Pittsburgh. This isn't like the DePaul teams that had one win in two seasons of Big East play; this team could take out the Johnnies.

Vegas thinks they will. It's up to St. John's to prove the oddsmakers wrong.

The crowd will be raucous. Here's what the crowd looked like during the 2010 triple-overtime game: 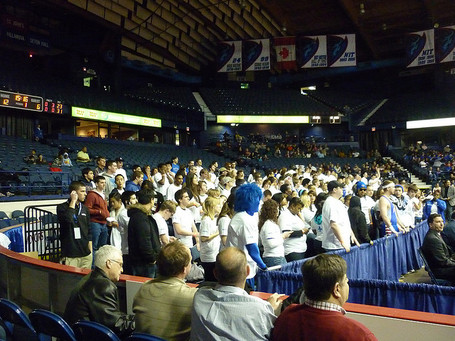 Yeah, that's a huge crowd (sarcasm). But we hope to see a whole lot of Phil Greene's peoples; he had some folks at Marquette, as well.

In case you're wondering where Rosemont is, it's right by O'Hare Airport, on the edge of the city, and 16 miles from DePaul's campus... without a reliable public transportation option.

Catch up with our game previews: