The Big East enters the middle part of February, the part of the basketball season where teams become true locks and the teams in the middle of the conference need to take stock of what they need to do to get to the promised land of the NCAA Tournament.

Seton Hall hasn't righted their ship, West Virginia continues to struggle, Notre Dame is made of sterner stuff than in previous years, Louisville has won 6 straight, and Providence, despite what you may think, is getting better.

It's repetitive to say "Syracuse is far better than the rest of the league, yet their rebounding is very bad and they take a LOT of jump shots instead of driving to the hoop". Until something changes, just assume that's the assessment of the Orange - a team with Final Four potential but some interestingly obvious flaws.

Efficiency margin notes on the Hall, the Mountaineers, Notre Dame, Louisville, Providence, and which teams have no shot at the NCAA Tournament, after the jump.

Data taken from Statsheet. You may want to read: An explanation of terms: stats + tempo-neutral terminology used on the Rumble, which will get a rewrite soon. Contact me and let me know what's unclear. The point is understanding, not obfuscation.

This week, we're using the color green for the Fighting Irish.

Teams that will not be dancing this March
(barring them winning the rest of their games and making a very deep run in the Big East Tournament):

On the iffy side of the bubble: 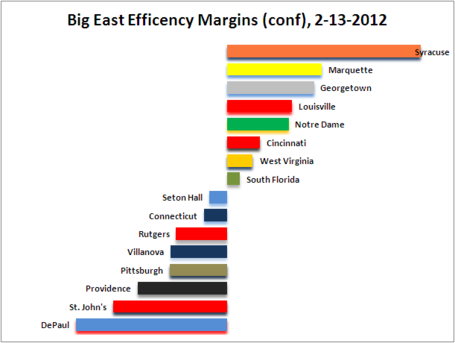 The Louisville Cardinals are winning by being strong inside the arc, holding opponents to 41.6% shooting inside the arc, best in the league. The defense doesn't generate turnovers, however, and that leaves the offense to create shots on its own. Given the team's breakneck pace, Russ Smith's undiscerning shot selection, Peyton Siva's occasional sloppiness, and Chane Behanan's fairly high turnover rate for a post player, it's a wonder the offense is as good as it is.

Of note: Chicago wing Wayne Blackshear is finally on the court. Not to say that he'll solve Louisville's offensive problems, but his ability to drive from the wing and put up buckets at 6'5" adds an exciting dimension to Rick Pitino's 40-man roster. Or is it only 17?

Blackshear didn't draw any fouls, and he doesn't help the Cardinals' offensive rebounding. But he adds a dangerous, creative dimension to a team that sometimes struggles to create shots when they're not in transition.

The West Virginia Mountaineers are within a possession of losing 6 in a row; only a last-second shot at Providence, in a game where the Mountaineers were dominated, saved them from that streak. The Mountaineers defense continues to struggle to defend shots inside the arc, and offense has a hard time hitting threes.

Every week, Huggins' team falls a little further from the top, and what looked like a stalwart Bob Huggins defense is struggling as much as Pittsburgh's. This week's Backyard Brawl against Pitt should be a hard-fought, desperate affair featuring a lot of missed jump shots.

Of note: Darryl Bryant and Kevin Jones have played all 40 minutes for two straight games.

In case you were wondering, this is not a common occurrence. Since 2006, the year that Louisville, Marquette, Cincinnati, South Florida, and DePaul joined the league, the Notre Dame defense has had one tolerable year and a few seasons where a competent team licked their lips at the prospect of playing a Notre Dame defense and putting up some sweet personal stats.

The Fighting Irish's defensive efficiencies (i.e, the points they give up pro-rated to 100 possessions) in the past seven years:

The year's not over, but that's a marked departure from other Notre Dame teams under Mike Brey that thought offense first, second, and last - and flamed out in the NCAA Tournament on the night when their shots stopped falling.

This "Notre Dame plays defense" thing is for real, even though the DePaul Blue Demons scraped them for 76 points in 66 possessions on Saturday. The Irish slow the game down, get into good defensive position, don't foul, and use their length to bother shots inside the arc. Teams should figure out whatever it is that DePaul did to draw so many fouls - and hit 9/16 3-pointers.

Of note: Notre Dame's rotation is 6 players in their recent win streak, with spot minutes for Joey Brooks and Mike Broghammer along the way.

The Seton Hall Pirates have won 2 in a row after losing 6 straight. That's good news; but the offensive crash that the Pirates had only abated against a Pittsburgh team that allows Big East teams to score 1.07 points per trip. The same worries are there about the Pirates interior scoring, inability to get to the free throw line, turnovers, and lack of offensive options.

Scoring ugly - with a defense as stingy as Seton Hall's - can work. But at some point, a team has to be able to put the ball in the basket.

Of note: Jordan Theodore is on this week's Big East honor roll.

And finally, the Providence Friars are the butt of everyone's jokes, the losers of the league, the 98-pound weakling. But their season has shown a lot of promise. The Friars continue to play in close games despite playing six players most of the team's minutes. Their efficiency margins have been going up each week.

But the Friars have been outscored in the second half for five straight games (including a win against Rutgers) - the fatigue factor seems evident.

Ed Cooley will want to find something different to do with his defense next year, however - the Friars can't stop three-point shooting, don't force turnovers, and aren't getting defensive rebounds.