Storm Warnings: Frosh Five in the past 6 Red Storm games

Share All sharing options for: Storm Warnings: Frosh Five in the past 6 Red Storm games

To say this season is what everyone expected would be a lie.

The transition from last year's team to this year's team has been dramatic, removed from the magic of last year. Of course everyone will say that they are completely new players and that point is agreeable but the hopes and expectations of this season seemed a bit washed and it's more due to a plague of a terrible string of events that it is this way.

In the last 6 games St. John's played 3 teams ranked in the Top 25 (Duke, Syracuse and Georgetown) and showed well in all but two of those 6 games.

Against Duke their deficit was 20, but they made a strong, gritty comeback. In their game against DePaul, the Red Storm shot a high percentage from the field and free throw line. (The only issue is that they allowed DePaul to do the same.) Syracuse was too tall a task for St. John's this season.

Versus the Cincinnati Bearcats, the team struggled and didn't play like the team that went on the road and beat the Bearcats two weeks prior. Against Georgetown, like Duke, they made the game interesting but just weren't able to get over the hump to victory. Lastly, against Seton Hall Pirates, the Red Storm suffered their worst loss of the season with a 30-point bombardment by the Pirates.

And to top those up and down weeks with a sour cherry, Malik Stith is no longer an active player for the already- depleted squad.

Despite the ups and downs, the players are showing some progress these past 6 games collectively as a team. Here's how each player fared individually over the stretch, with their high marks in selected categories and their averages in those categories, after the jump. 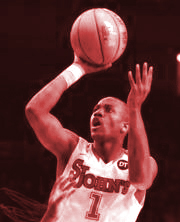 Phil Greene - The coaching staff had confidence in the Chicago-native and he's finding his stride.

During his homecoming to the Windy City against DePaul, Greene played a solid all-around game with 14 points,6 assist, 4 rebounds and 3 steals.

His constant contributions offensively and defensively the rest of the season will ease St. John's need for a starting point guard next year, even as Jamal Branch gets ready to step on the floor.

Amir Garrett - The best thing St. John's is getting out of Garrett is his energy. Like D'Angelo Harrison, Garrett has this ability to get his team rallied up before and during the game. Right before tip-off against Duke, Garrett walked over to each of his teammates on the court and gave them a little rally speech. His play is solid in the rebounding and scoring departments but his voice is an asset to a team that needs some fire from time to time.

Moe Harkless - Harkless has been one of the most outstanding freshman in the nation this year but in 2 of his last 5 games have shown why he is not ready just yet to make that NBA jump everyone keeps precluding to. His 30 point, 13 rebound effort against Duke rose expectations higher, but an injury-plagued performance against Duke hurt expectations. Harkless is the best talent St. John's has had in recent memory; he still has areas to grow in but his ceiling is high.

D`Angelo Harrison - Harrison has been lethal these past 6 games - 4 of them saw him score 20+ points. He had an electrifying night behind the arc against DePaul when he hit seven 3-pointers. But not to discredit his other numbers, Harrison has been dishing and rebounding the ball at a nice level over the stretch as well.

Sir`Dominic Pointer - Pointer's play has reached its steady level for the season. He is making a few baskets and rebounding the ball 4 times per game. His defensive pressure and disruption of the opposing teams offensive set isn't recorded in the box sheet, but that's where Pointer is making his living on this team. His only real down game in the past 6 was against Syracuse when he just seemed to not be ready for the big bodies of the Orange like Fab Melo and Kris Joseph. Of course, he is only 6'6, so contending with Syracuse was a tall task.

God`sgift Achiuwa - His role in the starting line-up was lost after Assistant Coach Mike Dunlap went to his freshmen starting lineup, the "Fresh Five". A strong 7-7, 15 point effort from Gift was a nice sight against DePaul. But on Sunday against the Hoyas, Gift struggled to make an impact. The mental part of Division I action could play a part, for Gift is physically gifted.

Jamal White - With Stith gone I guess White gets the last spot on the list since he did see game time against the Bearcats and Pirates. In his 2 minutes of action versus Cincy, White hit two 3-pointers totaling 6 points which is a nice thing to see. Though it doesn't seem like it will happen, Coach Dunlap should give White some minutes if he can prove he can dribble the ball up and create a shot for himself.